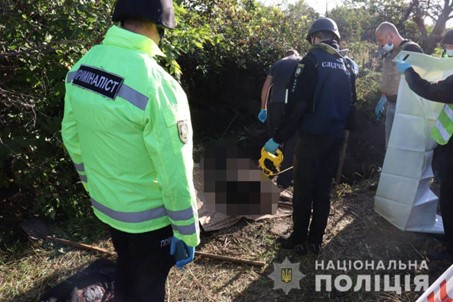 Investigators at the site of the exhumation in Hrakov, Chuhuiv raion, Kharkiv oblast Photo National Police

Investigators have exhumed the bodies of two civilians believed to have been killed by the Russian invaders in the village of Hrakove (Kharkiv oblast).  The men had been shot, and their ears cut off.  Judging by other areas freed from Russian occupation, this will probably not be the only gruesome discovery.

The National Police report that, following the liberation by Ukraine’s Armed Forces of Hrakove on 7 September, a local resident informed them that, in March, the Russian invaders had forced him to dig a grave and bury the bodies of two men with gunshot wounds, whose ears had been removed.

Investigators went to the site on 9 September, and exhumed two bodies, with the information about gunshot wounds and ears cut off unfortunately proving to be true. The men’s identity remains unknown, and their bodies have been sent for a full forensic examination.  A criminal investigation has been launched over war crimes (violating the rules of warfare) under Article 438 § 2.

Serhiy Bolvinov, Head of the Kharkiv Regional CID, commented that this was not the only case of atrocities by the Russians.  He said that just in Hrakove there are two other places that they will be investigating as soon as they have been cleared of any mines.

It became clear as soon as the Russians retreated from Kyiv oblast in April that they had left behind a huge number of civilian victims, many of whom had first been tortured, and then killed.  Video footage was shown around the world of streets, especially in Bucha, where bodies were left lying in the road, some with hands tied behind their bags.   The Russians had tried to destroy the naked bodies of five women who had first been raped, before just abandoning them on the side of the road.  On 12 April, the body was found in a mass grave of Karina Yershova, a 23-year-old woman who had fled, with her parents, from the Russians who seized control of Donetsk in 2014.  She had been raped and tortured, before being killed with a shot to the head.

Klymenko stressed then that new graves were being uncovered all the time.  In one mass grave in Bucha, they had found the bodies of 116 victims. In other graves, there were up to six or seven bodies.  On 13 June, for example, a grave containing the bodies of seven civilians had been found near Myrotske, where the Russians had been positioned while trying to advance on Kyiv.  The grave had been found in the same forest on 29 April of three other victims who had been tortured before being killed.

These were the most heinous, but almost certainly not the only war crimes committed by the Russian invading forces who had, for example, openly plundered people’s homes, shelled clearly civilian targets, mined even children’s playgrounds, etc.  In early April, Belarusian activists were able to video and name Russian soldiers caught sending the results of their plunder to their homes in Russia or trying to sell them in Belarus.  Since the stolen items included large appliances, like fridges, such plundering must have taken place with at least the tacit consent of the Russian military command.

Civilians are already known to have been tortured and killed in Sumy oblast, in Kherson oblast and essentially all parts of Ukraine that fall under occupation.  In the case of Mariupol which the world saw Russia bombing and nearly razing to the ground, Moscow is evidently trying to destroy the evidence of its crimes, including with the use of mobile crematoria.  Where such crimes cannot be denied, the Russian FSB has tried to coerce Ukrainians forcibly deported to Russia or the Ukrainian POWs held at Olenivka (occupied Donbas) to claim that these were committed by Ukrainian defenders.

Such methods will not work in those parts of the Kharkiv and Kherson oblasts now or soon to be liberated, and it seems likely that the coming days and weeks will bring to light many new war crimes.