‘Vote to join Russia’ or armed soldiers will come for you 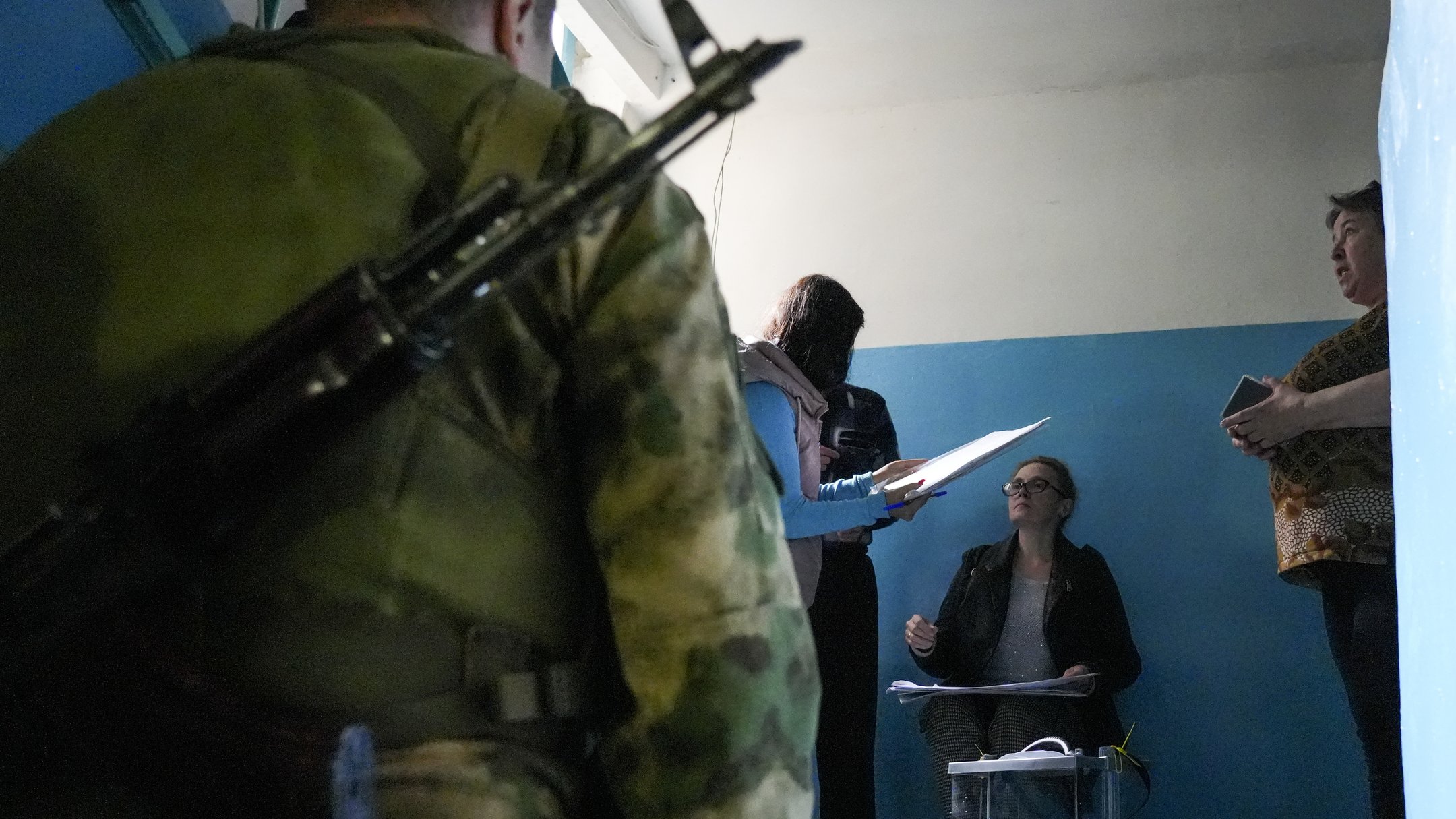 Russia has held the first three of five days of ‘voting’ in Russian-occupied parts of the Donetsk; Luhansk; Kherson and Zaporizhzhia oblasts, with Moscow claiming that this extraordinary stunt is a ‘referendum’ on joining Russia.  The Kremlin was clearly in a hurry to claim the territory as ‘Russian’ before the Ukrainian Armed Forces liberate it and paid even less heed to appearances than eight years ago.  It was, after all, clear that the international community such an attempt by an aggressor state to imitate popular support for seizure of Ukrainian territory.  There is, however, also no chance of faking public support, and the Russians have scarcely even tried.  ‘Votes’ are demanded by Russian soldiers with machine guns; there is no pretence of any secrecy of ‘ballot papers’ and attempts to bribe people into ticking the relevant box are also quite unconcealed.

The following are just some of the reports from areas under Russian occupation.

There were huge pro-Ukrainian demonstrations in March when the Russians seized this city of 150 thousand people.  The city’s Mayor Ivan Fedorov that, over six months later, less than 60 thousand residents remain.  The same is, of course, true of most of the places where Russia is staging these pseudo ‘referendums’, many of which were first virtually razed to the ground by Russian bombing and shelling.

Over three days, Fedorov said, the invaders have tried going around to each flat or home, demanding that people ‘vote’.  According to his information, the Russians or local collaborators were only able to find 20% of residents and managed to force 10% to ‘vote support for joining Russia’.

Videos have been posted from many cities, with it clear that such visitations, with these invariably including armed Russian soldiers, have absolutely nothing in common with ‘voting’.  According to Fedorov, the invaders turn up at the places people are registered at.  If it is other people who are, in fact, living there, they are forced to ‘vote’ for the flat owners.  People are also nabbed on the street.

The real Melitopol authorities, Fedorov adds, have passed a list of 58 heads of so-called ‘electoral commissions’ to the governments.  He and other public officials are adamant that all collaborators will be identified and prosecuted.

Viktor Dudakalov, Deputy Head of the District Council, many cases where people ‘voted’ without any electoral documents.  The self-styled ‘commissions’ with their armed Russian ‘escort’ turn up at people’s home and dismiss the argument that people don’t have documents as of no matter.

In Mariupol (Donetsk oblast), which the Russians systematically destroyed, people to ‘vote’ in return for drinking water.  In occupied Kakhovka (Kherson oblast), of money (40 thousand roubles).

explains that in occupied parts of Kherson oblast, the ‘referendum papers’ were made public a mere day before the supposed voting began.  There are, in fact, three ‘questions’ – whether a person is for Kherson oblast ‘leaving Ukraine’; for the formation of Kherson oblast as an independent state and for the latter ‘joining the Russian Federation’.  In short, three ticks are required.

This appears to be the format in the parts of the Kherson and Zaporizhzhia oblasts that Russia seized after its full-scale invasion of Ukraine on 24 February.  In occupied parts of Donbas (the so-called ‘Donetsk and Luhansk people’s republics’), there is only one question – for or against these proxy Russian entities joining Russia.

For occupied Donbas, this is the second pseudo ‘referendum’.  The first, on rubberstamping the creation of Russian-controlled ‘republics’, took place on 11 May 2014.  It too involved ‘voting’ with machine guns aimed at you and with anybody able to cast effectively as many ‘votes’ as they wanted.

A person forced to leave the oblast recounted family members’ experiences. They explained that two locals turned up, flanked by three armed men in camouflage gear and balaclavas.  One was given the ‘voting paper’ outside, on a bench, and was clearly being watched to ensure that he clicked the ‘yes’ box.

Another person from Stakhanov that everything had long been ready for such a pseudo-referendum.  Nobody is in any doubt that all public sector workers, enforcement officers, etc. will be brought in ‘to vote’.  “Maybe elderly people will also come.  I don’t think that there will be a large frequency, but that’s not needed. After all, everybody understands that the decision has long been taken, and all of this is mere fiction.”’

Petro Andriushchenko, Adviser to the Mayor of Mariupol, d a photo on 25 September of what he called this ‘circus-referendum’.  The photo showed a so-called electoral commission’ on a bench, surrounded by three propagandists, and nobody else.  “It’s all you need to know about Mariupol residents’ choice”, he added.

He told Suspilne about the so-called ‘mobile groups’ of four people – two civilians with a box for the ‘voting papers’ and two soldiers with machine guns.  People are effectively forced to ‘vote’, with little choice as to how, given the surveillance and the machine guns.

In the Manhush and Nikolske districts, Andriushchenko added, people are directly threatened with ‘arrest and imprisonment in a basement’ if they dare to vote against joining Russia.

The absolute majority of people, he says, are trying to ignore this circus referendum and avoid any involvement in it.

Suspilne spoke with various people who cannot, of course, be named.  One woman said that they had only learned that the event was finally happening from Telegram channels.  Another why they were even bothering.  After all, they had begun collecting personal data, under any possible pretext, months earlier.  She had heard that they planned to go around people’s flats and said that she would not open the door.

Under Vladimir Putin, ‘elections’ in Russia and occupied Crimea have long turned into a repeat of those in Soviet times, with the only concern being to ensure turnout for an event that has absolutely no meaning.

By sending soldiers with the individuals carrying ‘ballot papers’ around people’s homes, Russia is abandoning even that level of pretence.   The results of these farcical stunts could not, however, be more serious, both because Russia will then pretend to consider the territory ‘Russian’ and because it will use this as an excuse for forcing Ukrainians to fight its war against Ukraine.