‘Vote to join Russia’ or armed soldiers will come for youRussia needs sham "referendums" on occupied territory to forcibly mobilize Ukrainians as cannon fodder Russia sends forcibly mobilized Ukrainians from occupied Donbas to die as ‘live bait’ at the frontlineCovert mobilization and Ukrainian conscripts from occupied Crimea sent to die in Russia’s war against Ukraine Russian legislative changes would mean school leavers can officially be sent to fight in Ukraine Desperate plea from the wives of Donbas men seized and sent to fight Russia’s war against UkraineRussia deports Ukrainians to occupied Donbas, forcing them to fight its war against Ukraine Russia is forcibly ‘mobilizing’ Ukrainians from occupied territory to fight its war against Ukraine Russia plans total ‘filtration’ of Mariupol men and forced ‘mobilization’Russia destroys Mariupol and tries to get illegally deported residents to move to Siberia Russia accused of using mobile crematoria to hide its war crimes in Mariupol At least 50 Ukrainians were burned to death in Russia’s bombing of Mariupol hospitals Russian FSB produce ‘refugee’ propaganda video blaming Ukrainian soldiers for Russia"s war crimes in Mariupol Russia continues bombing Mariupol while producing propaganda videos about its ‘humanitarian aid’Russia responds to International Court order to stop bombing Ukraine by destroying Mariupol Theatre sheltering familiesRussian invaders take Mariupol intensive care hospital and its patients hostage Mass graves of the Ukrainian civilians Russia claims it is not killingTerror and abductions as Russia tries to break Ukrainian resistance in Kherson and other occupied citiesUkrainian journalist Oleh Baturin feared abducted by Russian invaders in Kherson oblast Mayor of Melitopol Ivan Fedorov abducted after refusing to collaborate with the Russian invaders
• Topics / War crimes

After destroying Mariupol, Russia claims its residents 'voted' for annexation and mobilizes them to fight Ukraine 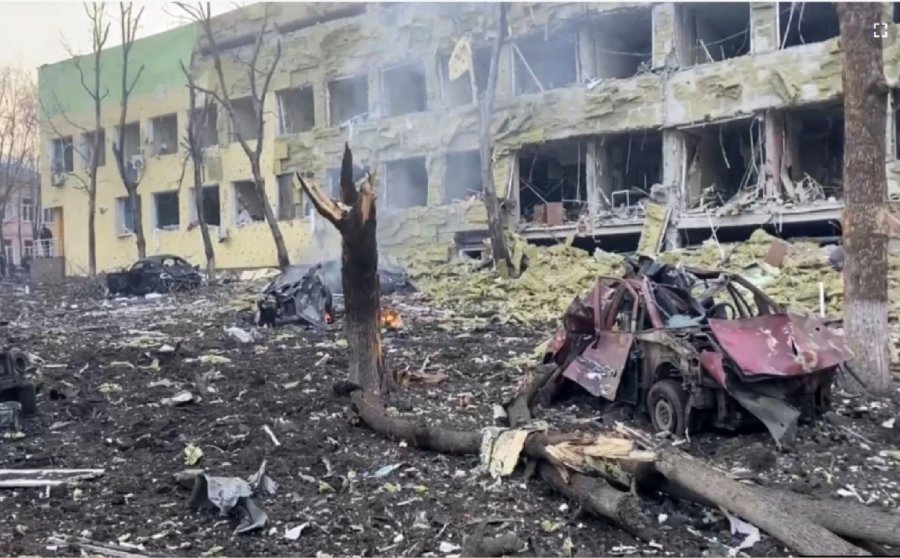 Russia has not even waited for ‘voting’ to end in its sham ‘referendum’ to claim huge ‘support’ for joining Russia and to begin ‘mobilizing’ Ukrainians from occupied Mariupol to fight and die its war of aggression against Ukraine.

The surreal nature of this supposed ‘referendum’ is particularly clear in Mariupol.  After several months of Russian relentless bombing and shelling of the city, Russia is claiming almost 100% support from surviving residents for joining the country that destroyed their homes and killed members of their families, neighbours and friends.  Worth watching the video clip which Petro Andriushchenko, Adviser to the Mayor of Mariupol, posted on 27 September to understand the only possible answer to his rhetorical question: “Does it really look as though Mariupol should be grateful?”

One of the reasons why Moscow organized these sham referendums was, undoubtedly, to forcibly mobilize Ukrainians from occupied parts of Ukraine, including Mariupol.  On 27 September, the Mariupol City Council posted a message circulated by the occupation regime to local residents, containing both a ‘request’ and an order.  The message began with the request to come to a so-called ‘polling station’ and ‘vote’ for joining the Russian Federation.  The second paragraph demonstrates that the invaders see no need to pretend that this is a real referendum whose result is as yet unknown.  Instead they inform that “in connection with the entry into force of V. Putin’s decree ‘On the partial mobilization of citizens in the Russian Federation’, you are asked on 29.09 to appear at a military recruitment office according to your place of registration. Have your passport with you, and personal belongings.”

The Council points out that Russia has been carrying out covert mobilization for some time, with the main result of this fake ‘referendum’ being to enable the aggressor state to carry it out openly.  “After all, the key thing that the Russians need is new cannon fodder to provide cover for its positions which it is giving up because of the Ukrainian Armed Forces’ counter-attack.”

The city authorities reiterated their advice given over several months now, namely to leave the city immediately, in order to save their lives.

Mariupol’s Mayor, Vadym Boichenko, believes that Russia could try to mobilize ten thousand men from occupied Mariupol, with Russia using the fake ‘referendum’ as its excuse.  He noted that the first victims of mobilization had been residents of Russia’s poorest, more depressed regions. If they don’t try to spare their own people, how would you expect them to spare those whom they were killing at the beginning of the full-scale invasion. “They destroyed Mariupol with artillery fire and airstrikes, and they will mobilize these people to the front to use as cannon fodder”.

As reported here, Russian began forcibly mobilizing men from occupied Donbas at the beginning of its full-scale invasion.  There were virtually no men left in the so-called ‘Donetsk and Luhansk people’s republics’, with men sent to fight without any training, and with no consideration of their state of health.  One of the reasons was doubtless that Russia did not need to record these men’s deaths, nor pay compensation to their families.  It has also been noted that their uniforms, etc. were of worse quality as were any weapons they were issued.

Such discrimination may now end, but only because reports from the ‘mobilization measures’ underway in Russia and occupied Crimea suggest that all those forcibly mobilized are being sent without training and in summer uniforms.