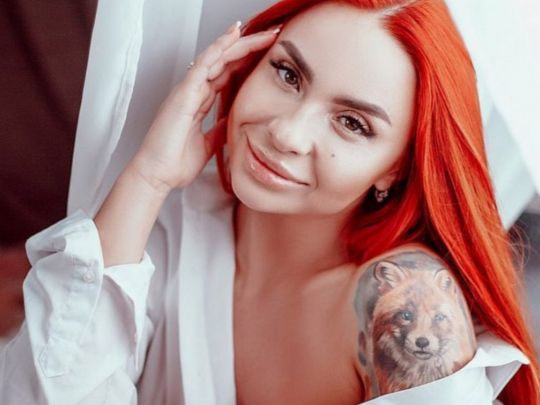 A Russian-controlled ‘court’ in occupied Crimea has fined this year’s ‘Miss Crimea’ and jailed her friend for singing the Ukrainian patriotic song ‘Chervona Kalyna’ [‘Red Kalyna, or Vibernum’].  These new prosecutions come just weeks after four people received jail terms and a fifth was heavily fined for playing the same song at a Crimean Tatar wedding.

34-year-old Olha Valyeva can be heard with her friend singing this well-known Ukrainian patriotic song from a balcony.  The video was initially posted on Valeyeva’s Instagram page but led to such torrents of threats and insults from pro-Russian circles, that Valeyeva removed it.  In response, she wrote on Instagram that she had no idea “that this song is connected with anything and that it is somehow prohibited. <> We simply sang a Ukrainian song (we thought it was simply a song which we have long known.

Yes! I am a Ukrainian! I am from Crimea and was born in Belohirsk. I live peacefully in Simferopol and am bringing up two children alone.  And you think I would have taken the risk, knowing, has it transpired, what this song means?”

She concludes by asking people to stop sending insults and saying that she didn’t wish anybody ill.

It seems that the initiative this time to get Valeyeva and her friend prosecuted came from Leonid Ivlev, a so-called Crimean deputy from Russia’s State Duma.  Ivlev was, however, parroting the hysteria that first emanated from Sergei Aksyonov, the Russian-installed ‘head’ of occupied Crimea.

The song Chervona Kalyna is actually very old, however the occupation regime concocted one of the two charges with the claim that slogans from the song were used by the Organization of Ukrainian Nationalists, which Russia has banned.  In fact, the real reason for persecuting those who sang or played it is doubtless due to the international prominence and poignance it has gained since Russia’s full-scale invasion of Ukraine in February.  The version first sung alone by Andriy Klyvniuk from Boombox, then accompanied by others in a powerful Zoom performance [watch and listen to the end!] were widely watched in Ukraine, and then became known worldwide through a Pink Floyd version with all proceeds going to the Ukrainian Humanitarian Fund.

Worth pointing out that, as Akhtem Chiygoz, Crimean Tatar Mejlis leader and Ukrainian MP, explained to Crimean Realities, Ukrainian songs had been regularly played at weddings, and New Year was openly celebrated according to Ukrainian time throughout the years of Russia’s illegal occupation of the peninsula.  The hysterical overreaction to the song in September 2022 is not explained only by the degree to which the song had become associated with Russia’s war of aggression against Ukraine.  Russia had been facing embarrassing military defeats, including attacks on military sites in occupied Crimea.  As Chiygoz put it, “the fact that the enemies are raging is a result of the actions of Ukraine’s Armed Forces.  Everybody understands that this is not for long, that the days of Crimean occupation are numbered.”

Aksyonov’s bellicose threats were clearly interpreted as an order by Russian-controlled ‘courts’.  On 13 September, the occupation Bakhchysarai district ‘court’ heard charges against Elvira Abdullayeva, the organizer of the Crimean Tatar wedding and mother of the bridegroom, over her allowing ‘Red Kalyna’ to be played.  There were two administrative charges: ‘public actions aimed at discrediting the use of the Russian armed forces’ (Article 20.3.3) and ‘propaganda or public demonstration of symbols or other elements of extremist organizations or other symbols, etc. that are banned’  On the first charge, she was fined 30 thousand roubles; on the second – jailed for five days.

The disk jockey that evening, Akhtem Hemedzhy, faced identical charges, and was fined 30 thousand roubles and jailed for ten days.  The same ‘court’ also jailed Lilia Abdullayeva, the bridegroom’s aunt,  for ten days.  Lila Saifullayeva, the mother of the bride and wife of the owner of the restaurant was ‘only’ fined 50 thousand roubles on the grounds that she has underage children.  The owner of the Arpat restaurant was, however, jailed for 15 days.

The same charges were then brought against Olha Valeyeva and her friend (whose name is presently unknown).  Presumably Valeyeva was ‘only’ fined 40 thousand roubles and not jailed for ten days, like her friend, because of the two children in her care.

As reported, on 12 August disk jockey Yury Rodionov as jailed for ten days for playing a Ukrainian song, with video accompaniment showing Ukrainian soldiers and symbols, in a Crimean bar.  The sentence was suspiciously quick, being passed literally the day after the video was posted on local pro-Russian social media sites. On 17 August, the same ‘court’ fined Dmytro Hain, who had asked for the song, 50 thousand roubles for supposed ‘actions aimed at discrediting the Russian armed forces’ [Article 20.3.3 of Russia’s code of administrative offences.].  Both men were forced to make ‘apologies’ on a video shown on pro-Russian Telegram channels.  According to Eskender Bariev, Head of the Crimean Tatar Resource Centre, the disk jockey from the wedding in Bakhchysarai  has also been forced to make such an ‘apology’.