Russian Prosecutor General given power to close media for ‘discrediting the army’ through truth about the war against UkraineYoung Crimean Tatar likely tortured into ‘confessing’ to anti-war protest Imprisoned in occupied Crimea for opposing Russia’s war against Ukraine Ukrainian seized and sentenced in Russian-occupied Crimea for pro-Ukrainian social media commentsArtist disappears after arrest for pro-Ukrainian anti-war protest in Russian occupied Crimea Crimean teacher dismissed and threatened with prosecution for telling students the truth about Russia’s war against UkraineRussia installs its propaganda TV after seizing Kherson and imposes 15-year sentences for reporting its invasion of UkraineUkrainian survivors of the Holocaust demand Putin and Russia get out of Ukraine Russia continues its carnage, flouting binding order from ECHR to stop bombing civilians in UkraineBabyn Yar bombed by Russia, 80 years after Nazi Massacre of Ukrainian Jews Russia proposes 15-year sentences and threatens "treason charges" for telling the truth about its war crimes in UkraineRussian schoolchildren told that Russia is bombing and killing Ukrainian children in ‘self-defence’ Putin miscalculated. Russia is fighting “an army of 40 million Ukrainians” Chief Rabbi of Ukraine demolishes Putin’s excuse for Russia’s invasion Russia bombs a Ukrainian kindergarten and apartments in its war against independent Ukraine Putin will continue attacking until Russia is stopped. Help Ukraine defend its freedom today!Russian Rule of Lawlessness in Occupied Crimea and DonbasMultiple jail terms for a patriotic Ukrainian song at Crimean Tatar wedding in Russian-occupied CrimeaFascism is here in Russia. Anti-war activities in Russia, 15-22 AugustConflicting values and conflicting narratives: the case of Russia’s war on Ukraine
• Topics / War crimes
• Topics / Human Rights Abuses in Russian-occupied Crimea 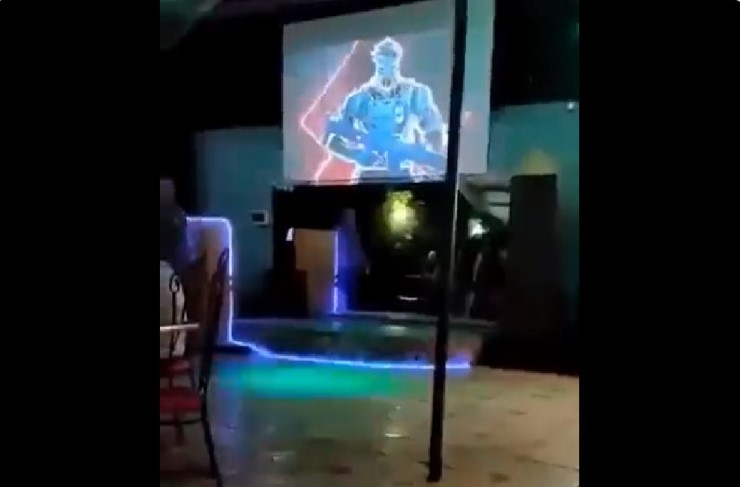 A Russian-controlled ‘court’ in occupied Crimea has sentenced disk jockey Yury Rodionov to ten days administrative arrest for playing a Ukrainian song, with video accompaniment showing Ukrainian soldiers and symbols, in a Crimean bar.  The sentence was suspiciously quick, being passed literally the day after the video was posted on local pro-Russian social media sites. On 17 August, the same ‘court’ fined Dmytro Hain, who had asked for the song, 50 thousand roubles for supposed ‘actions aimed at discrediting the Russian armed forces’ [Article 20.3.3 of Russia’s code of administrative offences.]

According to the pro-Russian social media pages, Rodionov was asked by a visitor to the Crab Café in Shcholkine, a tourist resort in the Leninsky raion, to play the Ukrainian song ‘Wild Field’ by the rap group Yarmak.  The song, sung in Ukrainian, was accompanied by a video clip.  This may be different from the one easily found on the Internet, but certainly had a stylised image of a Ukrainian soldier and the Ukrainian trident.    The video of the café and of the music playing was posted on social media on 13 August, the day after the song was played.  This was, presumably, together with a swift report against Rodionov and the café to the Russian-controlled police since the ‘court hearing was held the very next day.

Crimean Process, which monitors ‘court hearings’, reported on 15 August that the 10-day term of imprisonment had been handed down by ‘judge’ Anna Burova from the Leninsky District Court.   The charge was under Article 20.3 of Russia’s code of administrative offences which punishes for what is claimed to be ‘propaganda or public demonstration’ either of Nazi symbols, etc. or of those from what the current Russian regime calls ‘extremist organizations’,, or of symbols otherwise prohibited by Russian legislation. It is noteworthy that Crimean Process did not learn of it from the official court website which, as of 15 August, had no information about the date and time of the hearing, nor about the ruling.  This was despite the suspicious speed with which the ruling was passed and pro-Russian social media sites gained access to all of those named in this extraordinary administrative prosecution.

Crimean Process says that they learned that a resident of Shcholkine, Olha Tokareva had posted the video, on which a song was sung in Ukrainian, with the video showing a Ukrainian trident, a Ukrainian woman with an anti-tank Javelin missile and soldiers against the background of the Ukrainian flag.

The police decided that the video footage had symbols of the “Azov nationalist organization” and that there were “anti-Russian slogans” in the song.  Russia may be demonizing the Azov movement, but most of those watching the video clip would understand the image to be referring to the Azov Battalion soldiers defending Ukraine against the total Russian invasion since 24 February this year.  The song certainly speaks of the Hordes invading who can expect to meet their death on Ukrainian soil.

One of the most unsavoury parts of this blitzkrieg crackdown over a song is that three people were almost certainly forced or threatened into providing ‘repentant’ videos, which the Crimean Human Rights Group has posted.  These were Yury Rodionov, who put the music on, Dmytro Hain, the person who asked for the song, and Halyna Shchytova, the owner of the bar.  Hain mumbles his way through ‘apologies’ and ends by claiming that he “fully supports the special operation” [as Russia is calling its invasion].  Rodionov points out that he simply puts the music on that is asked for and that he normally then goes off to make a coffee or to use the toilet, and that as soon as he arrived back, he took the music off.

The Crimean Human Rights Group notes that there has been an escalation in attempts to silence dissent, with various articles of either the administrative code or the criminal code being used to persecute those expressing opposition to the war.  As reported,  Russia adopted new draconian legislation on 4 March this year, with both administrative and criminal liability (and potential 10-year sentences) envisaged for what is claimed to be action “aimed at discrediting the Russian armed forces”.  Telling the truth about the killing of civilians can get you a hefty fine or even a prison sentence, as can simply expressing opposition to it.

As of 21 July, 73 administrative cases had been passed to Crimean ‘courts’ on such supposed ‘discrediting of the Russian armed forces’.  At that time, 62 had already resulted in sentences, with those prosecuted having been ordered to pay around two million roubles in total.  This was most often for posting ‘No to the war’ on social media, or holding a legal single-person picket with such a slogan, as well as for conversations concerning the war, or comments or posts on social media.

In one case a person was fined for the slogan “I’m for peace”, with this claimed to discredit the Russian armed forces as Russia is officially claiming to not be at war with Ukraine, but carrying out a so-called ‘special operation’.

People have also been prosecuted for destroying or blotting out the Russian symbols for the war, such as the letter ‘Z’ or attacking cars with such symbols.

The other chilling part of such prosecutions is that they very often arise out of denunciations from colleagues, students, or even, in one case, from a wife against her husband after a political argument.

Imprisoned in occupied Crimea for opposing Russia’s war against Ukraine