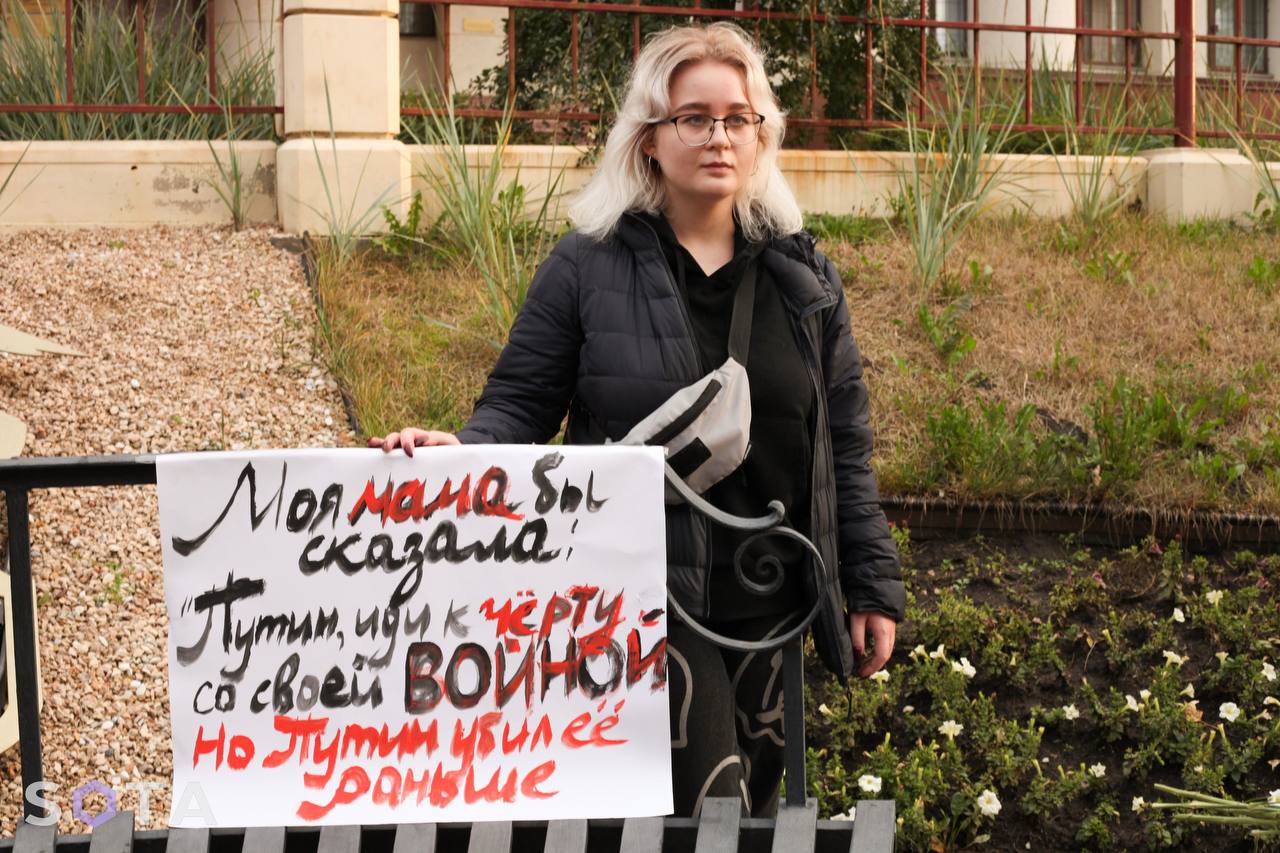 After the ‘partial’ mobilisation was announced on Wednesday 21 September protests in Russia against the war changed and took another direction.

Protests have been growing against the drafting of tens of thousands of men. Among opposition-minded citizens the very term “mobilisation” was reworked to incorporate the Russian word for a grave ‘mogila’ (могила): substituting ‘g’ for ‘b’ transformed the partial ‘draft’ into a mass burial movement (“mogilisation”).

For many in Russia the war ceased to be a conflict shown on television, somewhere far away, but a reality that could affect any family. Anti-war activists have used this shift in perception as the shortest route to Russian hearts, to the families who do not want to lose their sons, brothers or husbands.

Activists use the “partial draft” in their protests

Darya Ivanova and Victoria Lion, both from Moscow, stuck up flyers in the city: “We can bring a coffin, paid for by the State, into every home”. They were arrested on Sunday 25 September and subsequently told OVD-Info of the physical and verbal abuse to which they were subjected at a Lyublino district police station.

At the station, Darya confirmed that she had pasted up flyers. An officer from the “Extremism” centre then started to beat her: she was suffocated, the young woman says, kicked and hit, grabbed by her hair and thrown against surrounding objects. The police, meanwhile, threatened to charge her with prostitution or plant drugs on her.

Victoria, meanwhile, cited Article 51 of the RF Constitution (“No one shall be obliged to testify against himself / herself”) and refused to give a statement. She was not abused physically, but both women were insulted by police officers who called them “animals” and “scum” and said they should be killed.

On Friday 30 September, Ilya Suslov held a one-man protest in the city of Ivanovo (Central Russia). His placard bore the words of the Sixth Commandment (“Thou shalt not kill”) and anti-war slogans about mobilisation. The police arrested him and charged him with ‘discrediting’ the Russian army. His attorney called the arrest yet another restriction of the right to free speech.

Two years ago, the journalist Irina Slavina set fire to herself and died. “Blame the Russian Federation for my death”, were the last words she wrote on her Facebook page.

Her Koza.Press was the only independent publication in Nizhny Novgorod (Volga, pop. 1.3 million) and Slavina was constantly harassed and fined by the authorities. On 1 October 2020, they confiscated her computer and other equipment, all memory sticks and discs, and summoned her for questioning. The following day she performed an act of self-immolation in front of the main police and internal affairs department for the Nizhny Novgorod Region.

Recently her daughter Margarita Murakhtayeva held a one-woman protest in Nizhny Novgorod in her mother’s memory. “My mother would have told Putin, ‘Go to hell with your war!’ but he killed her earlier”, read the placard she held. 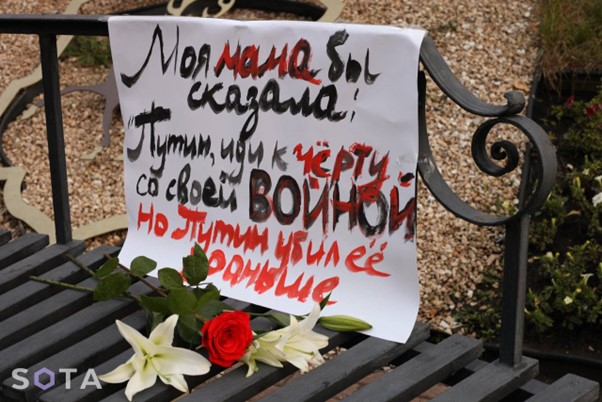 On Saturday 1 October, activist Lyubov Strelnikova held a one-woman protest in the centre of Moscow on Pushkin Square. Her placard bore the words, “We are not meat (cannon-fodder)”. She was arrested. 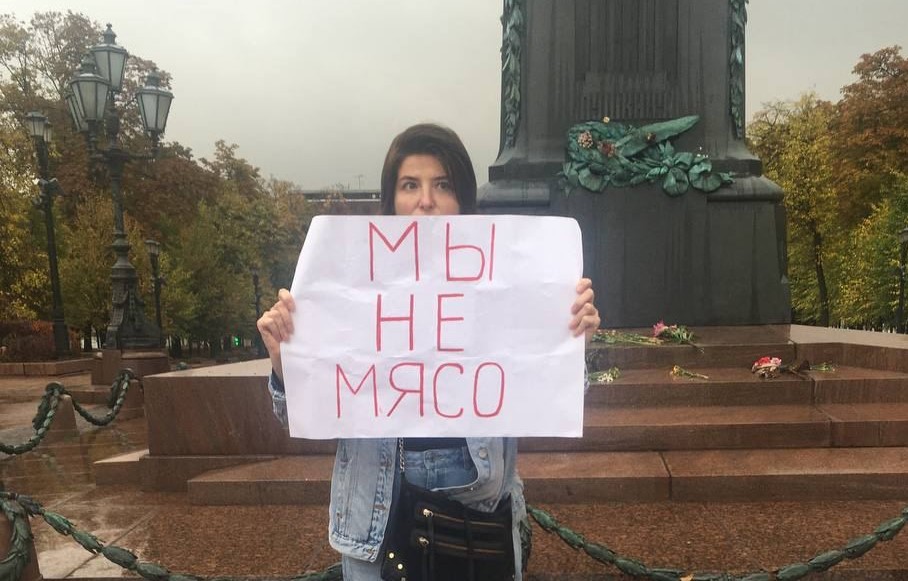 In Moscow someone added a note to a sign indicating access for disabled people. “Places for people who’ve returned from Ukraine”, it read, and the original words were painted over. 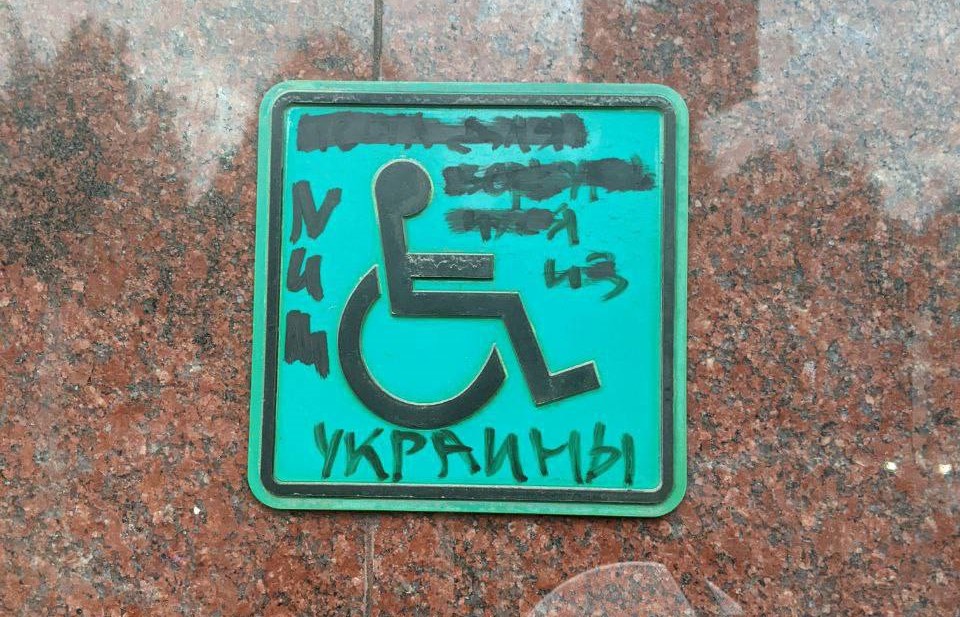 Protestor Karina Faskhutdinova was arrested on Saturday 1 October on the Griboyedov Embankment in St Petersburg. She was carrying a placard that read, “Stop the war, PEACE!”

OVD-Info reports that the police took her to a police station where she was charged with ‘discrediting’ the Russian army (Article 20.3.3, Administrative Offences), a misdemeanour for which she could be fined up to 3.5 Minimum Monthly salaries. Faskhutdinova was then released.

The FSB and police in Yakutia (Far East) decided to take pre-emptive action and arrested 23 young women at a demonstration that did not take place. It was planned to hold an anti-war rally on Saturday 1 October, but the organisers cancelled the event because of the large numbers of police officers on the streets.

The police decided not to deprive themselves of the pleasure of arresting some women and began to pick up groups of five at random. As a result, 23 young women were arrested. Sometime later all except one were released.

On Thursday 29 September, the FSB and the police used force to arrest several women in the city of Kyzyl (Tuva, south Siberia) who were protesting against the draft for the war in Ukraine. A relative of one of those arrested told OVD-Info about the incident. The women were driven to a police station, she said, where their finger-prints were taken. It is not known how many people were arrested during the protest but among them was a woman with a baby in a pram.

On Sunday 2 October a woman activist in St Petersburg gave an anti-war performance next to the obelisk celebrating the Hero-City Leningrad. She wore a dress stylised as a Russian flag and carried a baby doll in her arms.

Over five days from 26 to 30 September OVD-Info recorded the following cases of arson.

In St Petersburg the FSB and police arrested a 20-year-old student suspected of setting fire to a building in Lomonosovo that bore the “Enlistment &Recruitment office” (voyenkomat) sign. The investigators claim that the young man prepared an inflammable mixture at home because he wanted to set the voyenkomat records office on fire but went to the wrong address.

The building was set burning on Wednesday 21 September, the day a partial draft was announced. It was not in use, however; the Enlistment & Recruitment office was in the next building. For this reason, the charges first concerned a violation of fire safety rules. The student’s home was searched and, according to the Fontanka news website, chemical reagents and photographs (negatives) from the scene of the crime were confiscated, as was religious and nationalistic literature. Charges were brought under the Article 214 of the Criminal Code (Vandalism), concerning the intentional destruction of another’s property, or its deliberate damage.

In the legendary town of Uryupinsk (Volgograd Region, South Russia) FSB and police officers arrested Mikhail Filatov, a local man, as part of an investigation into arson at the Enlistment & Recruitmentoffice.

The building was attacked at around 4 am on Monday 26 September but the fire was quickly extinguished. According to the Kavkaz Realities website, a post appeared on Filatov’s InContact page with a photograph of a Molotov cocktail and the caption, “Everyone protests as he thinks fit”. The Investigation Committee has begun to look into the case.

FSB and police officers in Chernyakhovsk (Kaliningrad Region, Northwest Russia) arrested a local for setting fire to the sign of the Enlistment & Recruitment Office. The man is an out-patient at the psychiatric & neurological clinic. The authorities claim that he has given a statement, confessing his involvement in the incident.

In Russia’s third largest city, Novosibirsk (central Siberia), a man born in 1999 has been sent to the interrogation & detention centre (SIZO) for two months because of a plan to set the Region’s Enlistment & Recruitment Offices on fire.

The young man has been charged with the intention of organising a terrorist act (“Countering Terrorism”, 2006 Federal Law). “An unemployed inhabitant of Novosibirsk (b. 1999) has been identified as working for foreign agencies seeking to set fire to Enlistment & Recruitment Offices in the Novosibirsk Region,” says the regional FSB report, quoted by the press service of the Region’s administration.

FSB officers in the Rostov Region (South Russia) have brought criminal charges against Roman Shvedov who, it is claimed, threw a vessel containing petrol at the administrative building of the Zimovnikovsky district. He is charged with the intentional destruction of property or its deliberate damage (“Vandalism”, Article 214, Criminal Code)

On Monday 26 September, say the investigators, at 3 am Shvedov approached the building and tossed a can of petrol at the window of the head of the construction and amelioration department. The liquid then caught fire.

On Wednesday 28 September, Olga Trifonova was arrested in the city of Odintsovo (a western suburb of Moscow) on suspicion of circulating ‘fake news’ about the Russian army (Article 207.3, pt. 2, Criminal Code). As she told OVD-Info she had reposted online an article about Russian atrocities in Bucha, Ukraine.

Auction in support of anti-war protestors

A charitable auction was held on Monday 26 September in support of political prisoners who have been arrested and imprisoned for their anti-war views and activities.

The event was jointly organised by Department One (an association of lawyers and rights activists) and the Moscow Helsinki Group. Statuettes, diplomas and medals awarded to actors, authors and dramatists for their performances, books or plays were offered to the highest bidder.

Veteran actress Lia Akhedzhekovaoffered the Nika prize she received for her role in Eldar Rozanov’s “Promised Skies”. She has not left Russia and regularly voices her opposition to the war. In a warm and moving speech Akhedzhekova said how important it was for her and for the memory of film-director Rozanov that her award could help someone in such tough times.

On Tuesday 27 September, an unidentified activist of the Feminist Anti-War Resistance (FAR) left what appeared to be a page from a diary on the grave of Putin’s parents. It read:

“Dear parents, Your son is behaving very badly. He bunks off history lessons, fights with his classroom neighbours and has threatened to blow up the school. Do something!”

60-year-old Irina Tsybaneva was later arrested and charged with placing the notice on the grave. She faces up to five years imprisonment. 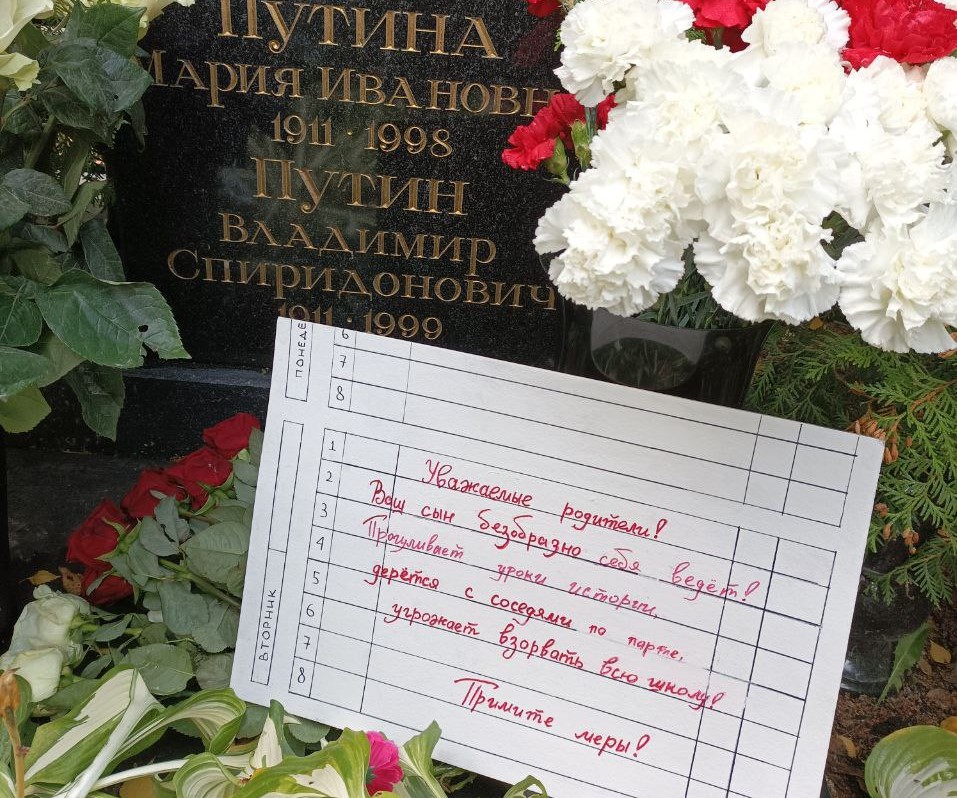 A placard on Mr and Mrs Putin’s grave (FAR)

Memorial volunteers have assembled this digest from information in the following and in other sources: online newspapers (Bumaga periodical and Novaya gazeta (Europe)); encrypted Telegram channels (OVD-Info (Telegram) and FAR (Telegram)); and a variety of websites.