Look at this instead. Anti-war activities in Russia, 2-11 September 2022 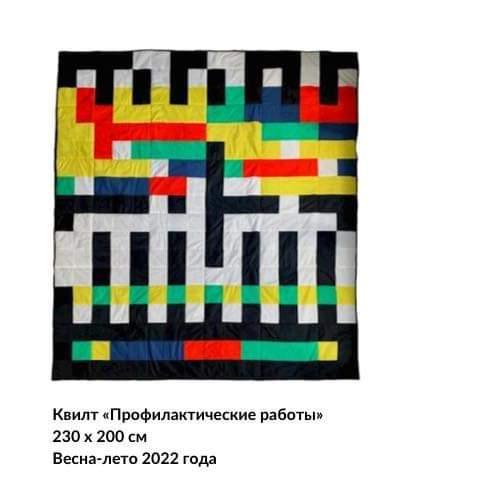 Think of the children

A woman from Ossetia who lost her husband and children during the 2004 Beslan Tragedy (North Caucasus) [1], has spoken out against the war in Ukraine, the Feminist Anti-War Resistance (FAR) Telegram channel. Emma Tagayeva made a public appeal to her fellow Ossetians, calling the present war inhuman and senseless. 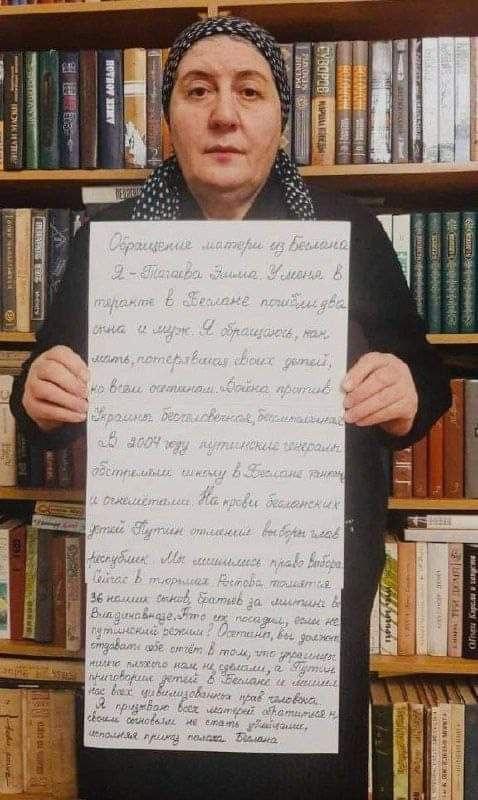 The FAR Telegram channel published a photo of Tagayeva holding the text of her appeal. It reads

“An appeal from a Beslan mother, Emma Tagayeva.

“My husband and two sons died during the terrorist act in Beslan. As a mother who has lost her children, I appeal to all fellow Ossetians. The war against Ukraine is inhuman and senseless.

“In September 2004, Putin’s generals used grenade-launchers and fire-throwers against the school in Beslan. Putin used this as an excuse to cancel elections of the heads of Russia’s republics [and Regions]. We were deprived of our right to vote. Today 36 of our sons and brothers are languishing in the prisons of Rostov-on-Don for taking part in rallies in Vladikavkaz.[2]  Who put them there if not the Putin Regime?

“You should note, fellow Ossetians, that the Ukrainians have done us no harm while Putin condemned our children to death in Beslan and deprived us of all the rights we should enjoy. I appeal to all mothers: talk to your sons and tell them not to become murderers following the orders of the Butcher of Beslan!”

In Karelia (Northwest Russia) a court has fined Natalya, mother of a large family, for reposting items on the InContact social media, the 7x7 “Horizontal Russia” Telegram channel. She was found guilty of “discrediting” the Russian army (Article 20.3.3, Administrative Offences). “I posted the photos in order to halt the madness: children are dying there and here,” Natalya explained.

Women of the Feminist Anti-War Resistance (FAR) left a rhyme on the asphalt outside a school in St Petersburg the “Wake up, Russia!” Telegram channel. Their protest was timed, they said, to coincide with the introduction of the “Chats on Key Themes” propaganda lessons in Russia’s secondary schools. “We wanted to remind everyone that we are not taught the most important things for the purpose of fighting a war, and to express our support for parents and teachers who know this truth”. 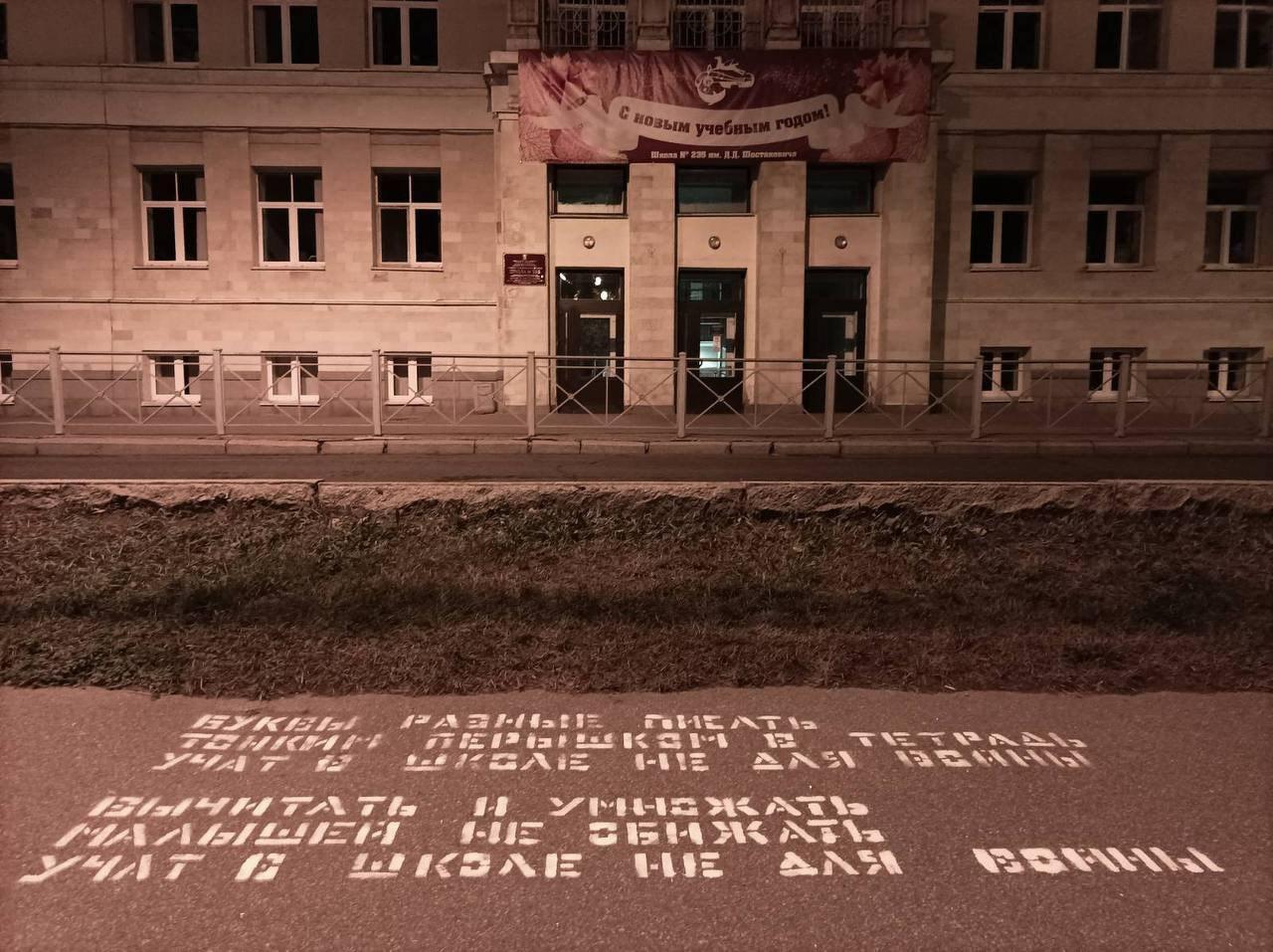 Secondary school, St Petersburg (FAR)
This is what they wrote next on the pavement opposite the school:

At school you learn

to write letters in your exercise books,

Not to fight a war:

That’s what they teach in school.

You learn to divide and multiply,

Not to harm the young,

Not to fight a war:

That’s what they teach in school.

On the“Chats on Key Themes” website has appeared of the lesson “Our country, Russia”, the“Wake up, Russia!” Telegram channel. Ukraine, the “special operation”, NATO military bases, “the defence of Russian people in the Donbas” have all vanished from the latest version.

According to the previous version of the textbook, the lessons should give pupils an understanding “of the goals of the Special Military Operation, that the inhabitants of the Donetsk and Luhansk People’s Republics are Russians, and it is important, therefore, that they become  part of  Russia. And that Russian soldiers are heroes.”

To fight against the textbook, the “Alliance of Teachers” Telegram channel has drawn up to be completed by teachers and parents who do not want children to hear or attend “Chats about Important Subjects”.

Galina Semyonova and Valeria Demidova were arrested for holding an anti-war protest outside the Ministry of Defence in Moscow OVD-Info.[3] The young women were decked out in Ukrainian mourning dress and carried a traditional rushnyk embroidered with the words “No to the War”. 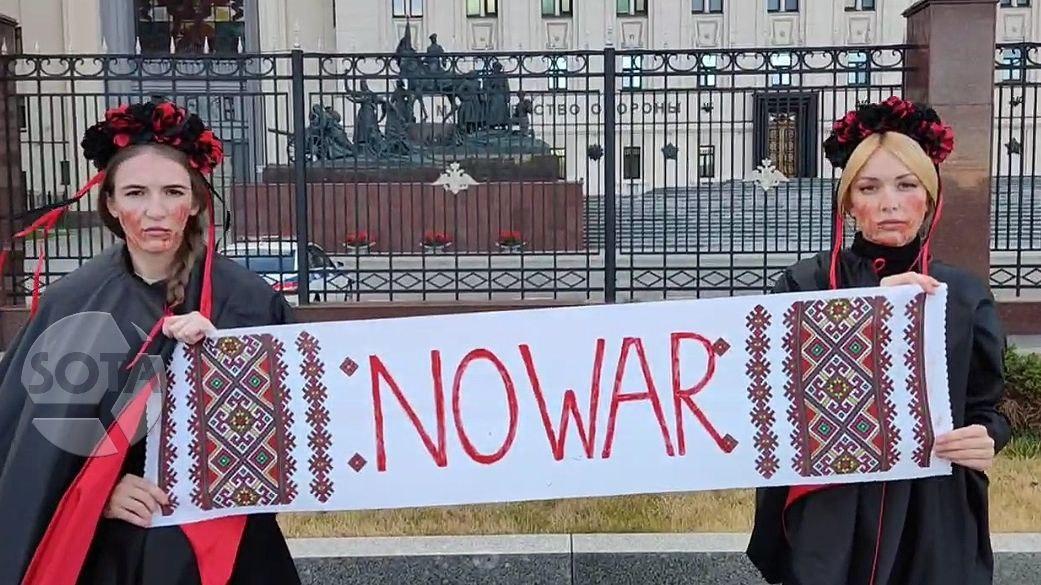 Protest outside the Ministry of Defence (OVD-Info)

In Samara (Volga) Andrei Zhvakin was arrested for holding a one man protest with a placard reading “We are strong enough to stop this war”, OVD-Info. He was charged with “discrediting” the Russian army. 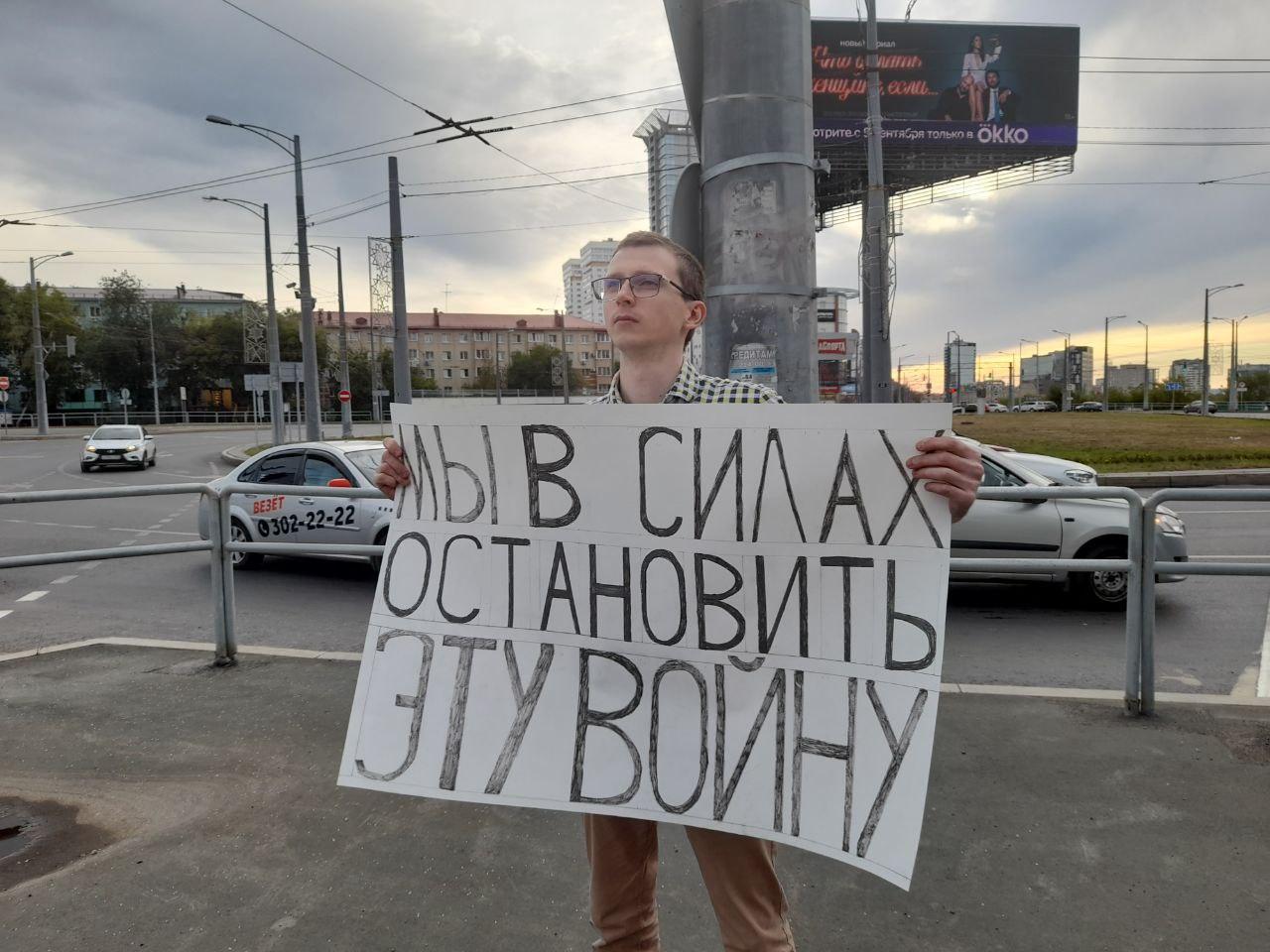 In Moscow, two women paying their last respects to Mikhail Gorbachev were arrested on Saturday 3 September OVD-Info, for wearing anti-war badges. Alexandra Kiselyova and another woman, who does not wish  to be named, were convicted of “discrediting” the Russian army and fined.

During the hearing of Kiselyova’s case the judge paid no attention to the woman’s low income or the fact that she was looking after her 80-year-old mother. She was fined 50,000 roubles.

At the other protestor’s trial her attorney told the court that his client was born in 1949 and received a pension worth less than 30,000 roubles a month. The judge saw no reason to lessen the fine, however, and demanded that the 73-year-old pay 30,000 roubles.

A new anti-war work by the artist ‘ffchw’ has appeared in Perm (Volga). The graffiti reads “Only Rain should fall from the Sky”, the “Wake up, Russia!” Telegram channel. 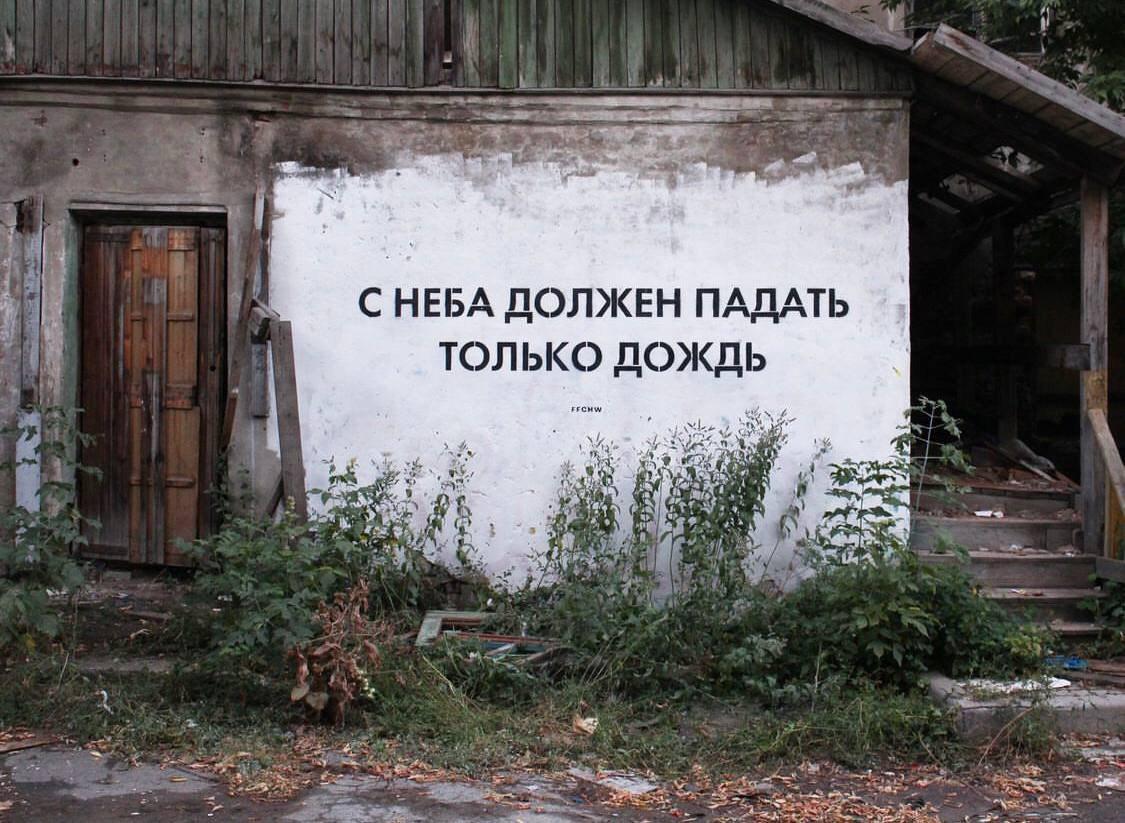 In Ivanovo (Central Russia) Olga Nazarenko was arrested after she held a one-woman protest, speaking out against the war and in support of political prisoners convicted for their anti-war stance and statements. Nazarenko’s lawyer Oscar Cherdyshev OVD-Info of these aspects of the case as he set out to visit his client. 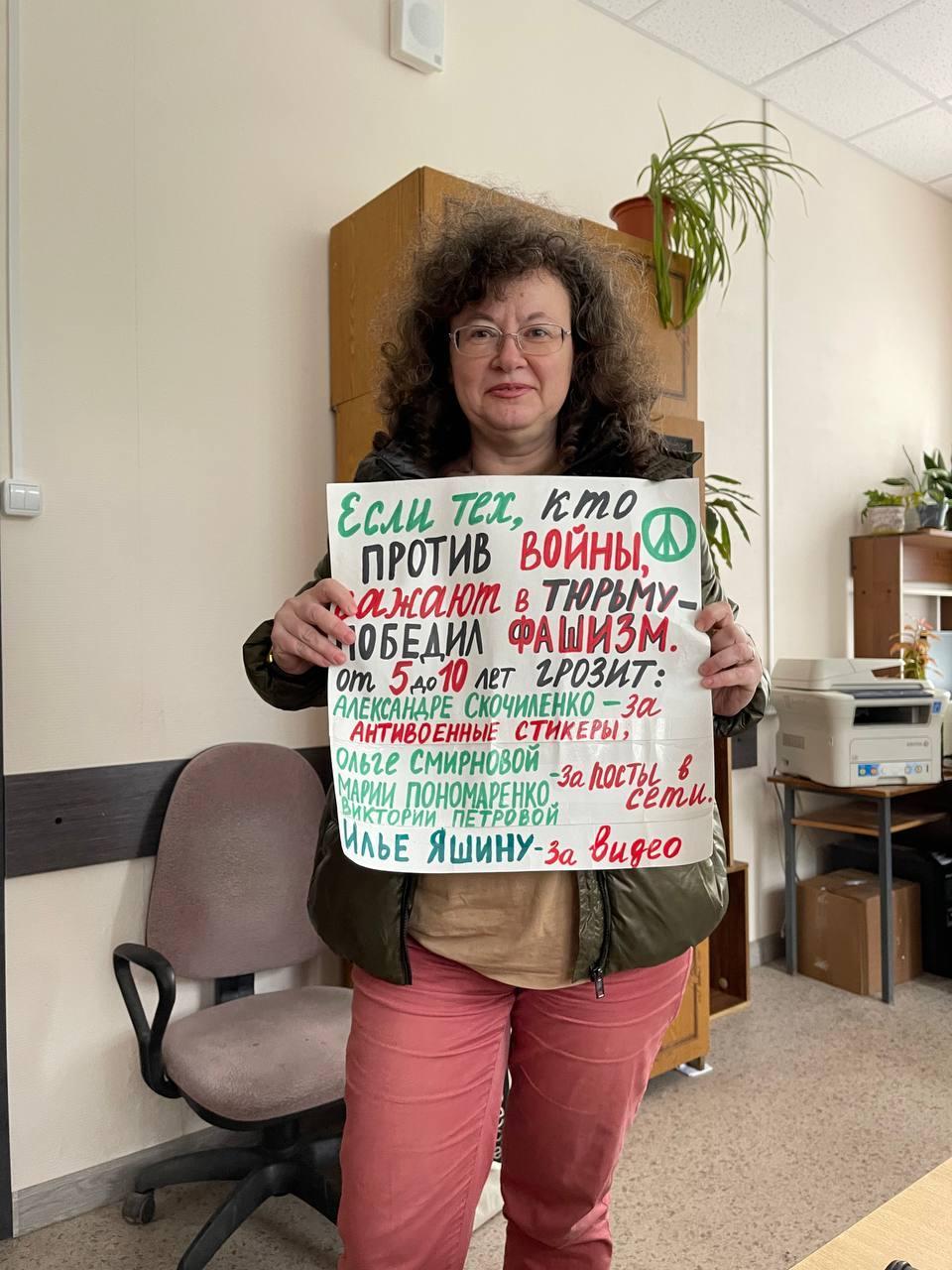 On Sunday 11 September, elections were held in 11 of Russia’s Regions and four of its Republics to choose or confirm the governors and heads of those subjects of the Russian Federation.

Some voters combined casting their vote and making anti-war statements. 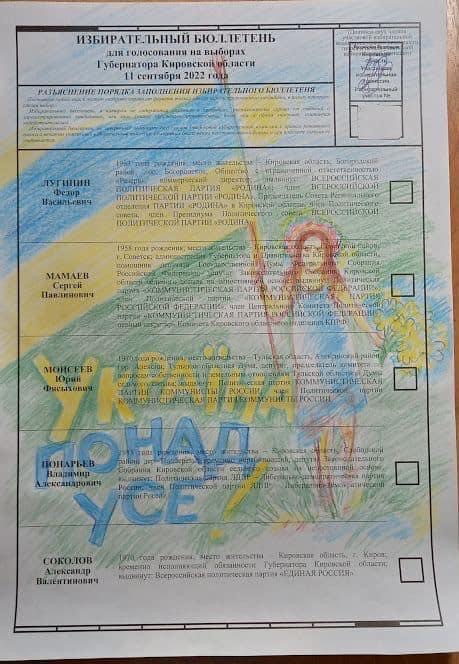 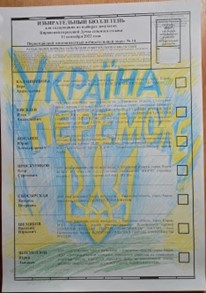 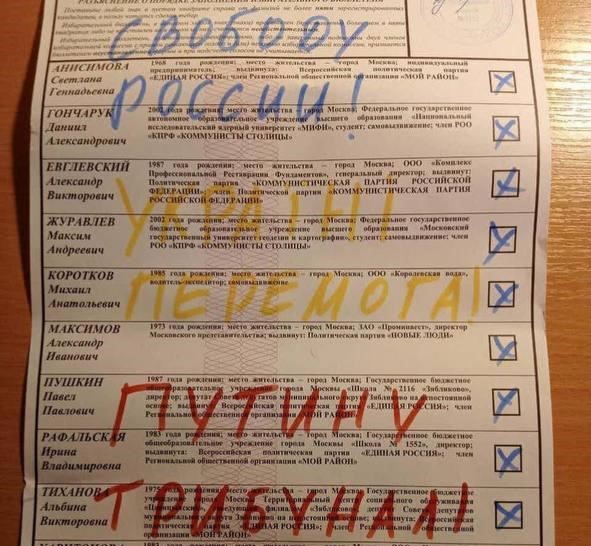 An inhabitant of Kopeisk in the Chelyabinsk Region (Urals), Pyotr Borovinskikh faces criminal charges for repeatedly “discrediting” the Russian army, OVD-Info. In the view of the investigation Borovinskikh posted “information” in which the actions of Russian soldiers are “characterised as terrorist”. Borovinskikh says that he was told that the charges were made because of posts about the shelling of Mariupol that he had shared on the InContact social media.

FSB and police officers searched his apartment. The investigators say that in March the man knowingly published “false information” about the actions of the Russian army “on a media channel which he managed”.

YouTube blogger Dmitry Ivanov, also known as Kamikaze D, has been charged under Article 207.3 with circulating “fake news” about the Russian armed forces. The pretext for the criminal charges, OVD-Info, are video clips in which Ivanov described the Russian air force attack on the drama theatre in Mariupol and spoke in negative terms about the response of Ministry of Foreign Affairs spokeswoman Maria Zakharova.

In the Stavropol Region (North Caucasus) a court fined a local woman for “discrediting” the army after she posted comments on InContact. These details were byOVD-Info.

These were her words about the soldiers in the Russian army:

The case materials also recall the phrase, “Glory to Ukraine!” in her comments and the avatar she used on InContact which reads “No to the War”.

The Soviet district court in Novosibirsk  (central Siberia) fined a woman from the city Katalisa Goldina for “discrediting” the Russian army because, OVD-Info, of certain stickers on her iPad.

They read “No to the War”, “I’m with you, Ukraine!” and “Sunny circle, sky all round” (children's song). According to the court’s verdict, the woman held the iPad in her hands and “showed it to those nearby”, thereby discrediting the Russian army.

Activist Konstantin Fokin was arrested near the Lenin Mausoleum in Moscow with a placard reading, “The Sixth Commandment: Thou shalt not kill”. OVD-Info reported both and . Fokin was charged with “discrediting” the Russian armed forces. 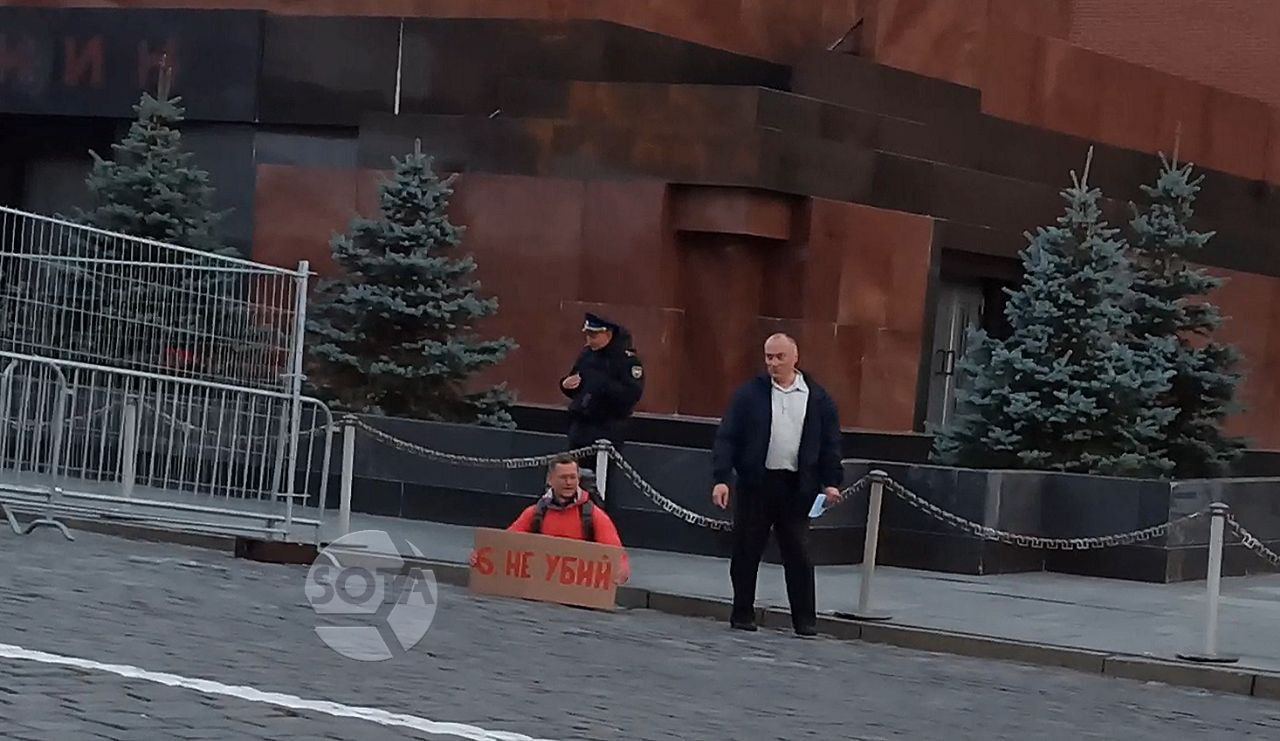 The Sixth Commandment “Thou shalt not kill” (OVD-Info)

In the city square in Kostroma (Central Russia) a 51-year-old-man broke an illuminated letter Z. He was convicted, OVD-Info, of vandalism (Article 214, Criminal Code).

The police in the Sverdlovsk Region (Urals) have twice visited the parents of anti-war activist Ruslan Kolobov demanding to know the whereabouts of their son. , Kolobov was arrested on Friday 2 September near Yekaterinburg’s city administration building where he was protesting with a placard that read “Z = swastika”. He was then taken to a police station and later released without charge.

In Irkutsk (east Siberia), , an unidentified protestor threw blue and yellow paint at a passing garbage truck decorated with the letter Z.

In Odintsovo (Moscow Region) searches were carried out at the homes of four staff members of the Odintsovo-Info website and at the apartment of  website director Andrei Ostroukhov, OVD-Info. The searches were part of an investigation of criminal charges of spreading “fake news” about the Russian army in certain publications on the website.

The Sverdlovsk Region department of culture (Urals) has asked the Tele-club venue to consider the anti-war views of performers when organising its programme. In a letter to the club’s director, the “Wake up, Russia!” Telegram channel, the head of the culture department mentions the administrative and criminal laws for “discrediting” the Russian army or circulating “fake news” about its actions.

A concert in Irkutsk (east Siberia) by the pianist Polina Osetinskaya has been cancelled. The official explanation is that she is unwell.

This is the second time in September that a performance by Osetinskaya has been cancelled. On 24 February, OVD-Info reports, the pianist published a photo of a badge inscribed with the words “No to the War”. Beneath the badge was the caption, “This is a black day in our history”. Later Osetinskaya supported an appeal by NGOs to President Putin, calling for an end to the war.

A quilt to cover the largest TV screen

A Russian artist Alevtina Yelsukova has sewn a quilt resembling the TV signal screen and sold it at auction. The money will be used to buy blankets for Ukrainian refugees, the Feminist Anti-War Resistance Telegram channel.

The artist herself said:

This quilt could cover the largest TV screen and stop anyone watching it again[…] The quilt is for sale. The higher the price, the more warm blankets I can buy and give to the centre to aid refugees. It’s already autumn, afterall." 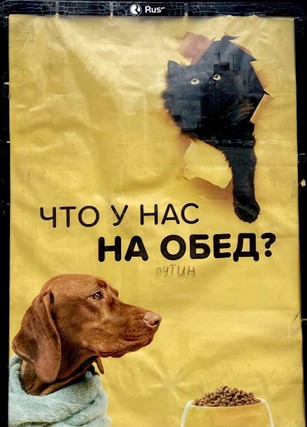 Memorial volunteers compiled this digest from reports on Telegram channels and other sources: , , , , , , and

On 1 September 2004, a secondary school in Ossetia was seized by Shamil Basayev and his Chechen fighters and all its teachers and schoolchildren were taken hostage. The brutal methods used to lift the siege by Russian forces led to the deaths not only of 31 hostage-takers, but also of 147 innocent adults and 186 children.

In April 2020, about two thousand people gathered in the North Ossetian capital to protest against anti-Covid restrictions and to call for the resignation of the republic’s leader. Several were arrested, convicted and imprisoned. They were joined by opera singer Vadim Cheldiyev who was accused of spreading “fake news” about Covid and assaulting the police.

OVD-Info began its activities in December 2011 during the protests against the rigging of elections to the Duma. Since then, the NGO has built up records of the forms of repression used by the Putin regime, identified the victims among protestors and members of the non-systemic opposition and offered them legal advice.