Czech court to decide if armed Russian paramilitary awarded for his role in the invasion of Crimea is extradited to Ukraine Czech authorities arrest Russian paramilitary awarded by Kremlin for role in annexation of Crimea Czech Republic passes record 21-year sentence for terrorism in militant-controlled Ukraine Czech Republic sentences Donbas fighter to 20 years on terrorism charges Czech gets 15 years on terrorism charges for fighting for Russian-controlled Donbas militantsCzech gets 3-year sentence for fighting in Donbas on side of Russian-controlled militantsLatvian resident sentenced to five years for Russian-paid fighting in DonbasRussian propaganda chief Kiselyov gets his nephew jailed in Germany for involvement in war in UkraineCzech national charged with terrorism after fighting for Russian-backed militants in UkraineBriton jailed on terrorism charges for fighting with Russia-backed militants in UkraineBriton charged with terrorism for involvement with Kremlin-backed militants in DonbasNot in Our Name: Journalist NGOs Should Condemn Propagandist Graham Phillips’ Torture StuntMaimed Ukrainian Hostage Finally Exchanged by Kremlin-Backed MilitantsKremlin-backed militants to put maimed and tortured hostage on ‘trial’Tortured Ukrainian ‘Sentenced’ by Kremlin-backed militants to 30 yearsDonbas militants could sentence Ukrainian hostages to death for ’spying’Kremlin-backed Donbas militants threaten to execute Ukrainian prisonersPraised on Russian radio for war crimes in Crimea & DonbasSloviansk torture, killings, execution orders, yet still no proper investigationFamilies of murdered hostages demand proper investigation
• Topics / War crimes 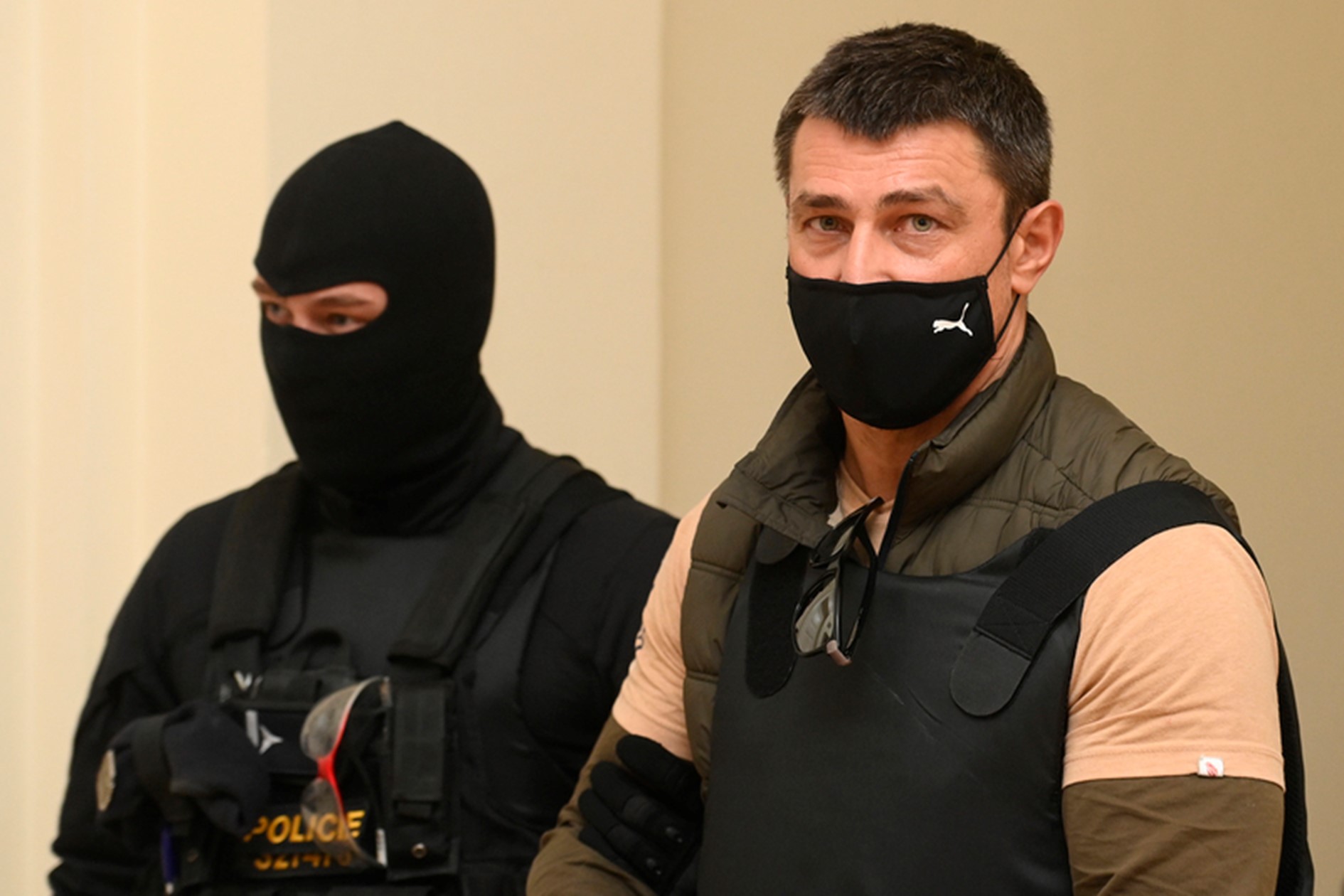 The Prague Municipal Court has dismissed one of two charges against Aleksandr Franchetti, with the other charge against the former Russian paramilitary still potentially carrying a sentence of up to 15 years.  This decision and the court order that Franchetti be released from detention are not final and, according to prosecutor Marek Bodlák. The appeal will, however, be held with Franchetti at liberty.

Aleksandr Franchetti played, and later boasted about, an active role in Russia’s invasion and annexation of Crimea and is reported by Myrotvorets to have received one of the Kremlin’s illegal medals ‘for the return of Crimea’.  He remains accused of having founded an organized criminal gang with the aim of committing a terrorist attack.  The Municipal Court, however, considered that the prosecution had not provided sufficient evidence for the charge of having taken part in forcibly imprisoning at least eleven supporters of Ukrainian unity.

Franchetti had lived in the Czech Republic for several years and has residence status there.  He is, however, a Russian citizen, and is accused of having travelled from Voronezh in Russia to Sevastopol (Crimea) in February 2014 and co-founded the so-called Sevastopol samooborona [or self-defence] armed gang of paramilitaries.  Within this formation, he is alleged to have financed and led a twelve-man gang called ‘North Wind ’[“Северный ветер»].  According to the indictment, the aim of both of these armed and illegal formations was “to contribute to the illegal annexation of Crimea by the Russian Federation through acts of sabotage, including armed attacks against Ukrainian government forces, the Ukrainian population, and critical infrastructure."   Franchetti is accused of having surveyed the terrain, monitored gas and power lines, as well as movements in the area, and obtained information about the deployment of Ukrainian forces, their weapons and ammunition caches.  It is alleged that he passed this information on to the Russian naval forces in the knowledge that it would be used for Russia’s invasion and annexation of Crimea.

According to Prosecutor Bodlák, Franchetti is now pleading not guilty and claiming to have been in Moscow during the period in question.  This seems problematical for two reasons.  One is that he previously denied the specific charges, but not his presence in Crimea.  He claimed that he had merely ‘patrolled the forest’ with other civilians, purportedly to help protect residents, and that he had arrived after the annexation had already begun, wanting to save his family and property because of the threat of war.

The second difficulty with such denials is that they run counter to Franchetti’s own description of his activities in Crimea given in at least two interviews. The first of these was in April 2015, together with Dejan Berić [nom de guerre Deki], a fighter for the Russian / Russian-controlled militants in the Russian proxy ‘Donetsk people’s republic’.  The second interview was to a Russian journalist in occupied Sevastopol on 13 May 2015.

During these interviews, Franchetti said that he had arrived in Sevastopol on 25 February 2014, two days before Russian soldiers without insignia seized control.  He had, he asserted, within the next three days formed his ‘North Wind’ group of 12 ‘forest rangers and ‘tourists’ able to move stealthily about in the forest and “read tracks”.  Franchetti clearly assumed that he was speaking (boasting) to a Russian or pro-Russian audience and could admit to all of this with impunity.

The interviews, however, were noted by Czech Radio who, in July 2019, published a report entitled: Russian annexation of Crimea with a Czech footprint.  The report cited at least one of the interviews from 2015 and quoted Franchetti as describing how his ‘North Wind reconnaissance group’ had “aimed to eliminate the penetration of various groups on the territory of Sevastopol. We divided the district into sectors where there were still patrols, both moving and immovable. We watched the surroundings, the movement of cars, unusual cars, we looked for shelters.”  He claimed that they had not themselves had arms but had provided such information to the Russian Navy.  The 2019 Czech report noted that, like other paramilitaries, Franchetti and his group had reported directly to senior Russian military officers, and quoted a Czech political analyst, Petr Pojman, as saying that the paramilitaries’ role in the invasion had been as important as that of the professional Russian soldiers. Pojman went on to describe such groups, as that of Franchetti’s, as essentially terrorist, having taken part in the illegal occupation of Crimea and, as such, having committed acts of terrorism on Ukrainian sovereign territory.

When tracked down by the radio station, Franchetti claimed that he had travelled to Crimea, on 25 February 2014, all on his own initiative.  This, he alleged, was because Ukrainians were planning a series of attacks and he wanted to protect Russian citizens.  He named incredible amounts of ammunition and firearms that he claimed his group had found and asserted that they had handed one group of supposed assassins to the Russian army.  He denied that he and his group had done anything illegal, as per international law.  Franchetti earlier asserted that Deki had been a member of his group in Crimea and that “it was thanks to him that we detained a quite large group of extremists – eleven people”.

The second charge, which the Municipal Court in Prague dismissed on 20 October, was presumably based on this admission.  As reported earlier, Franchetti’s claim had not been substantiated by evidence of any such group or cache of weapons.  On the other hand, human rights groups have documented numerous cases where the so-called ‘self-defence paramilitaries’ were responsible for abductions; torture; and either killing or enforced disappearances.

Ukraine’s Crimean Prosecutor announced on 29 July 2019 that it was bringing criminal charges under Article 260 § 2 against Dejan Berić for his role in ‘North Wind’.  No mention then was made of Franchetti.  This may have been in order to enable Ukraine to catch him, since he would certainly not be handed over by Russia.  Graty reports that on 6 August 2019, the Czech authorities officially confirmed that Franchetti was in their country and Ukraine placed him on the international wanted list.  In February 2020, an arrest warrant was issued by the Holosiyv District Court in Kyiv, and an official extradition request subsequently placed with the Czech Ministry of Justice.  According to a spokesperson from Ukraine’s Ministry of Foreign Affairs, Franchetti’s arrest on 12 September 2021 was the result of cooperation between the Czech and Ukrainian authorities.

The Prague Municipal Court initially allowed Ukraine’s request for Franchetti’s extradition however this was overturned by the Supreme Court, with the argument being that Russia’s full-scale invasion of Ukraine meant that there was a danger that Franchetti’s human rights would be violated if the extradition went through.

The charges that Franchetti is continuing to face in the Czech Republic appear to carry a harsher sentence than if he were extradited.  In Ukraine, Franchetti faces prosecution under Article 260 § 2 of the Criminal Code for the creation or participation in an unlawful armed formation and, if convicted, a sentence of from three to eight years.