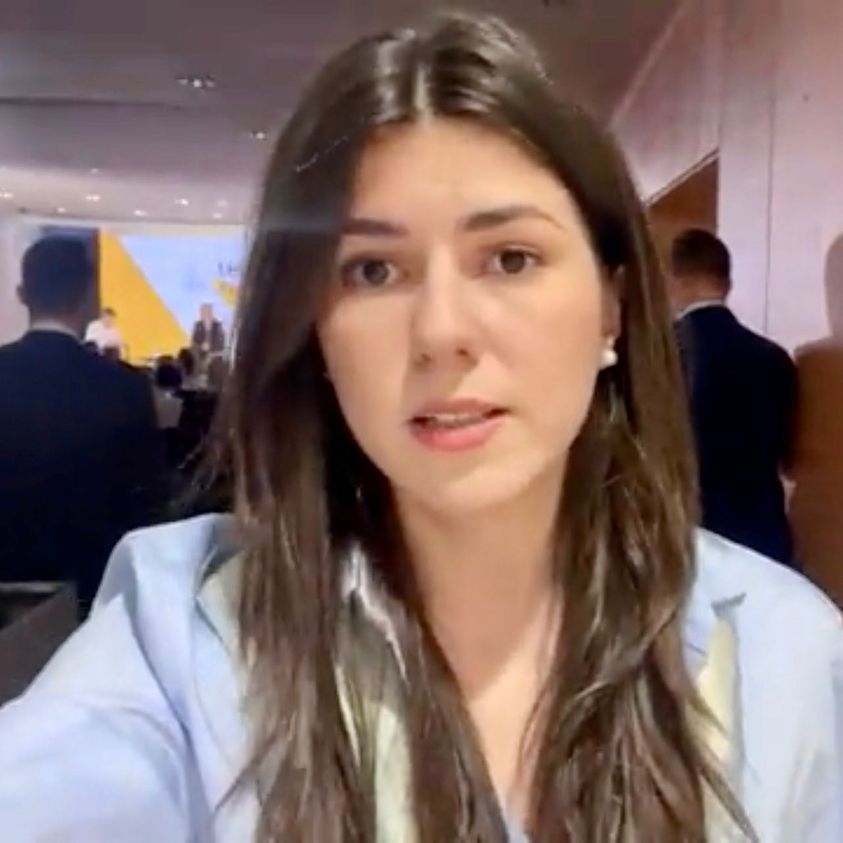 TV ATR journalist Gulsum Khalilova was detained on 27 October at the airport in Istanbul with the actions by the Turkish enforcement authorities seemingly based on an Interpol Red Notice issued at Russia’s request.  Khalilova was later released, and was able to enter Turkey, however the incident is of serious concern given the evident political motives behind Russia’s wish to secure the Crimean Tatar journalist’s extradition and prosecution.

News of Khalilova’s detention first came from ATR General Director Ayder Muzhdabaev.  Shortly afterwards Refat Chubarov, Chair of the Mejlis of the Crimean Tatar people and Ukrainian MP, reported that Khalilova had been released and allowed into Turkey.

Chubarov called on Ukrainians outraged by the incident to show restraint in their assessment, saying that Interpol has professional procedure which requires them to follow such Red Notices from member states.  He notes that he too has twice been briefly detained while travelling abroad in connection with requests on fabricated charges from Russia. He stresses that individual countries, in this case, Turkey are obliged to respond to such Interpol requests.  Rather than blaming them, he says, Interpol’s member state should expel Russia from this international policing body.  It is shameful that civilized countries are forced to carry out such procedure on the basis of requests from Russia, a terrorist state.

While there certainly seems every reason to expel Russia from Interpol, it is questionable whether the latter is, in fact, doing enough to prevent such evident abuse.  There are many cases where repressive regimes bring spurious criminal charges against those they wish to imprison on political grounds.  Interpol doubtless lacks the facilities to investigate each such case. There are, however, other instances, including the charges against Gulsum Khalilova (and Refat Chubarov), where Interpol could have immediately understood that Russia’s request was politically motivated.  Their failure to do so means that, at present, all Ukrainian citizens whom the Russian regime is persecuting should be wary of travelling to countries which are very closely collaborating with Russia.  The same would surely be true of all other repressive regimes, were no checks to be in place.  If there are checks in other cases, they do not appear to be working when it comes to the Russian Federation.  The latter came very close to having their candidate installed as Interpol President in 2018 despite abundant proof that Russia is using flawed legislation and politically controlled courts (including the Supreme Court) for political and religious persecution, both against its own citizens and in occupied Crimea.  Interpol need only look at the number of Crimean Tatar and other Ukrainian political prisoners sentenced to terms of up to 20 years without any recognizable crime.  Russia’s notorious ‘list of extremists and terrorists’ contains a huge number of Crimean Tatar civic journalists or activists; Jehovah’s Witnesses and others recognized by Russian, Ukrainian or international human rights NGOs as political prisoners.

As reported, an ‘arrest warrant’ was issued against the ATR journalist by an illegal Russian occupation ‘court’ in Crimea in early August 2019.  Khalilova herself only learned that she was facing Russian ‘criminal proceedings’ from the site of the ‘High Court’ on 1 August 2019, although the original ruling by ‘judge’ Denis Didenko from the Kievsky district ‘court’ in Simferopol dated back to 12 July.

Like many other Crimean journalists, Khalilova was forced to leave Crimea after Russia’s invasion and annexation.  She has worked ever since, as a journalist and presenter, for TV ATR, the Crimean Tatar channel which Russia also drove out of occupied Crimea.  The ‘warrant’ for her arrest was thus issued in absentia.

Were she to be illegally extradited to Russia or occupied Crimea, she would face charges which have become one of Russia’s conveyor belt weapons of repression against Crimean Tatars.  They would be particularly shocking in her case as they pertain to her activities as a journalist.

Khalilova is accused, under Article 208 § 2 of “taking part in the activities of an unlawful armed formation acting on the territory of a foreign country for purposes which are against the interests of the Russian Federation”.

Since its full-scale invasion of Ukraine, Russia has begun intensively using these charges against Ukrainian citizens abducted either at checkpoints into occupied Crimea or from occupied parts of Ukraine.  The organization in question is the Noman Çelebicihan Battalion which is neither illegal in Ukraine, nor an armed formation. It was founded by Crimean Tatar activist and businessman Lenur Islyamov on 1 January 2016, with the first members people who had taken part in the essentially peaceful civic blockade of occupied Crimea from 20 September 2015. The blockade began with human rights demands, including the release of all political prisoners and reinstatement of the other human rights that Russia had been systematically crushing since its invasion and annexation of Crimea.

Russia’s persecution of Crimean Tatars on unproven charges of involvement in the Noman Çelebicihan Battalion began in 2018, but has escalated since the invasion of new Ukrainian territory. To justify its abductions of Ukrainian citizens from such newly seized parts of Ukraine, the Russian Supreme Court stepped in, declaring the Battalion (which no longer exists) ‘terrorist’.  Shortly afterwards the Battalion was added to Russia’s ‘list of extremists and terrorists’ (more details of such persecution here and here).

The above is already ample reason for Interpol to have rejected Russia’s request for an international Red Notice, however there is more.  The charges that Russia wants to bring against Gulsum Khalilova are based solely on her coverage of the civic blockade in her capacity as journalist.  Nor is Russia really denying this, as Khalilova is accused of having provided the Battalion with so-called ‘information support’.  In commenting on the situation back in 2019, Khalilova said: ““From the beginning of the civic blockade, from 20 September 2015 until 1 January 2016, the date of the creation of the battalion, I worked there as a field journalist. Each day, I was involved in live broadcasts, features and talked about what was going on with the blockade of Crimea. I was purely carrying out my work as a journalist, but clearly they have decided that they need to come down on freedom of speech.<> They need to claim that Crimean Tatars are taking part in some kind of bands, they need to fabricate more criminal cases against the indigenous people of Crimea who are demonstrating their civic, pro-Ukrainian position. “

Interpol needed only glance at the charges that Russia wished to bring against a journalist for doing her job in mainland Ukraine, and reject the application.  The fact that it did not do so is of immense concern and makes it imperative that other member states give serious consideration to the call to expel Russia now and prevent it from further compromising the organization.