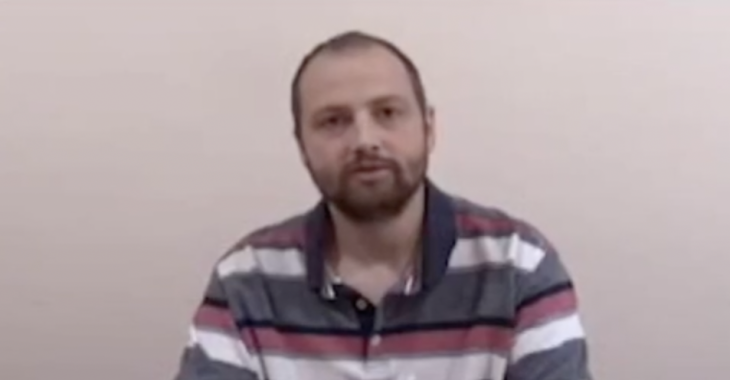 Yaroslav Zhuk, a volunteer from Melitopol (Zaporizhzhia oblast) who was taken hostage by the Russian invaders in June this year, has revealed harrowing details of the torture he was subjected to in the first days after he was seized in occupied Melitopol.  The account smuggled out of the prison in occupied Simferopol confirms fears triggered by a videoed ‘confession’ posted on the Internet a month after his abduction.

In the statement, made public by the Crimean Human Rights Group, Zhuk explains that he was seized on 17 June while driving in Melitopol.  A BMW blocked his path and an armed man, pointing a pistol at him, dragged him out of his car, beating him, and then put handcuffs on, and a bag over his head.  He was then taken by this armed man, and several others, to a basement where he was held for about a week.  He cannot be more specific as he lost consciousness as a result of the torture he endured.

He was held all that time with a bag over his head, tied around with scotch tape. For the first three days, he was in handcuffs all the time, then they cut these off with an angle-grinder.  Approximately every half-hour, his captors came and tortured him, applying wires to his legs; arms; genitals; earlobes or testicles, with the Russians then turning on an electric current, with this causing agonizing pain.  He was also beaten with a blunt instrument over his entire body.  They burned his feet with a lit gas burner , and also applied psychological torture. He was not given any food at all during the first week, only a tiny amount of water each day.

He says that since the torture, he has lost the feeling in all toes, and has partially lost his hearing from the regular beatings around the head.

He eventually couldn’t endure such torture anymore and agreed to ‘confess’ to whatever they demanded of him. At that point he was taken, blindfolded, to another premises, without any light or water, where “they got me to sign a printed confession to fabricated charges.”  He says that there were, in fact, three distinct versions of the ‘confession’, each of which he was tortured into signing.  He was then forced to learn the text of (one) ‘confession’ and read it out before a video camera.  They waited for this, however, until the torture marks on his face had cleared.

Zhuk asserts that they also forced him into holding (and therefore leaving fingerprints) on various items and substances.  Worth noting that the FSB [Russian security service] in occupied Crimea have used DNA illegally obtained from political prisoners without the presence of a lawyer in order to fabricate alleged material evidence.  The same will presumably be tried here, with the FSB clearly involved.  Zhuk recalls that on one of the documents, FSB captain Ipatyev was named.

Zhuk says that he was held in this basement from 17 June to 8 August, before being taken by force to occupied Crimea, to the Simferopol FSB.

As reported, two volunteers from Melitopol were abducted in the middle of June,  22-year-old Illya Yenin was at home with his wife, two small children and his grandmother when around 15 armed Russian soldiers turned up and staged a ‘search’.  They began beating Illya immediately, and then took him away, telling his family not to expect him back for a long time.

Almost a month after Zhuk was seized and then disappeared, the Russian state-controlled TASS agency claimed that “the saboteur who made an attempt on the life of the Russian-installed 'director' of the Melitopol department of education’, Olena Shapurova, had been ‘detained’.  They cited, as their source, Vladimir Rogov, a collaborator installed by the Russians in Melitopol and the video he posted on his Telegram channel, in which Zhuk, was seen alone, supposedly ‘confessing’ to the attack, and saying that he is part of the partisan movement, under the command of Ukraine’s Security Service [SBU].   A collaborator, installed by the Russian invaders of democratic Ukraine, and the Russian propaganda media, turn the situation entirely on its head, claiming that the so-called “law-enforcement bodies of the Zaporizhzhia oblast are continuing to carry out successful work in investigating the terrorist crimes of the Zelensky regime”.

This is the ‘confession’ that Zhuk has now confirmed was given under duress.  It was clear from the video that he was nervous and that he appeared to be reciting a prepared text.

Having used torture to obtain such a ‘confession’, the Russians saw no need to confine themselves to the remotely conceivable.  Instead they got Zhuk to claim that Ivan Fedorov, the elected Mayor of Melitopol and a former hostage, played a direct role in the alleged attack.

On 11 August a Russian-controlled ‘court’ in occupied Crimea ordered that Zhuk be remanded in custody in the Simferopol SIZO [remand prison].  This was almost a month after he was taken prisoner.  It became clear from a later ‘court’ report on 28 August, that Zhuk is charged with ‘an act of international terrorism’ under Article 361 § 1 of Russia’s criminal code. The Russian aggressor state has thus abducted a Ukrainian in his own country, forced him through torture to ‘confess’ to supposed ‘crimes’ and then taken him to occupied Crimea.  The charges under Russian legislation could result in a life sentence, handed down by an occupation ‘court’ without any legality.