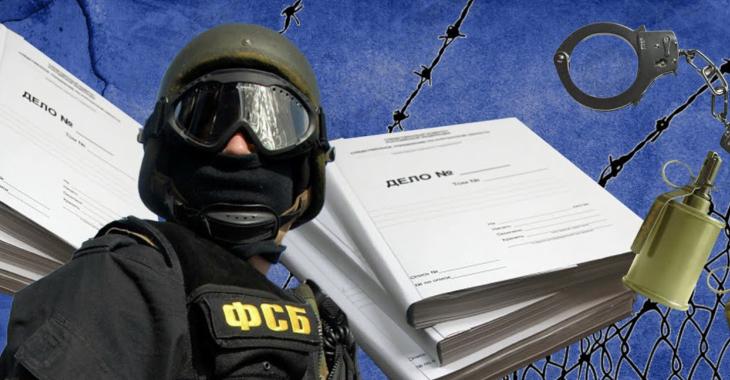 Photo montage from the Centre for Journalist Investigations

Russia’s fabrication of ‘terrorism’ charges began almost immediately after its invasion of Crimea in February 2014.  Back then, however, there were isolated arrests, such as those of Oleh Sentsov and three other open opponents of Russian occupation.  Since Russia’s full-scale invasion of Ukraine, there has been a huge increase in abductions, with many of those who disappear after being seized in Kherson or Zaporizhzhia oblasts later proving to be imprisoned in occupied Crimea.  The Crimean occupation regime has even opened a new SIZO, or remand centre to accommodate the new victims of this extension of Russia’s aggression and repression.

The charges of ‘international terrorism’, under Article 361 § 1 of Russia’s criminal code, are insane, but that, unfortunately, does not mean that they will not result in horrific sentences (10-20 years or even life imprisonment).

These new prosecutions are, reportedly, fabricated by the same FSB [Russian security service] officers who have been concocting charges against Crimean Tatars and other Ukrainians since 2014.   FSB officers can expect promotion or bonuses by using such ‘arrests’ and prosecutions to claim that they are ‘fighting terrorism’, while not really having to do anything at all.  Dmitry Dinze, the Russian lawyer who has represented many of the Kremlin’s Ukrainian political prisoners, has compared the situation in occupied Crimea with that in Russia and says that there is a staggering difference.  While political persecution is practised widely by the Russian regime, the level of sloppiness and overt fabrication of ‘evidence’ is much higher in occupied Crimea.  The FSB in Russia are, at least, a bit more professional, whereas here “it’s as if some bloke with an axe set to work”. He has the feeling that the FSB in Crimea are so certain of impunity that they see no need to aspire to any credibility.  Even before Russia’s full-scale invasion, there was every reason for them to assume such lack of any accountability with the ‘courts’ essentially always providing the sentences demanded of them.

All such cases are identical in that they involve Ukrainians being abducted from Russian-occupied parts of the Kherson and Zaporizhzhia oblasts, and disappearing for long periods. In every case where the person’s whereabouts is learned and they gain access to a  proper lawyer, we hear accounts of horrific torture during the period when they were held incommunicado.  This includes electric currents attached to sensitive parts of the body, including genitals, beatings, and being deprived of food and water.  The torture is used to force out ‘confessions’, with it essentially not mattering that the victims retract them as soon as they are allowed to see an independent lawyer and explain in detail the methods used to extract them.

Wherever the Russians have captured an area, they have immediately begun seizing civilians and, most often, torturing them. Their victims have included men, women, and several teenagers, as young as 14.  Like earlier in occupied Donbas, some of the hostage-taking was to extort money from the hostages themselves, or their families.  Often people are simply seized because they happen to cross the invaders’ path, and are, eventually, released.  In other cases, the Russians were clearly targeting public officials; journalists; civic activists and those who were working as volunteers, helping to evacuate civilians or to bring them food or medicines.  They also hunted former veterans of ATO [the initial phase of the military conflict in Donbas), current military people or members of their family.  The fate of a fair number of these people remains unknown.  With respect to the hostages known to be imprisoned in occupied Crimea, the FSB have probably decided to stage show trials because of the person’s pro-Ukrainian position and opposition to Russia’s invasion.  Their victims include at very least two men who are charged with ‘international terrorism’ - 32-year-old Yaroslav Zhuk from Melitopol and Pavlo Zaporozhets (also 32), an ATO veteran from Kherson.  Zhuk was seized by the Russians in June and held for some time in a Melitopol basement, before being taken to occupied Crimea and ‘officially detained’.  He has managed to provide details of the torture used to force him into providing signatures on alternative ‘confessions’.  Pavlo Zaporozhets was seized on 9 May and held prisoner for three months before any official acknowledgement of his detention in occupied Crimea. Russia appears to be charging him, under Article 361 of its criminal code, with so-called ‘international terrorism’.  It claims that he was planning a so-called ‘terrorist act’ during a Russian ‘Immortal Regiment’ procession in occupied Kherson on 9 May (Victory Day).  Aleksei Ladin, the lawyer representing both Zaporozhets and Zhuk has confirmed that both men were subjected to torture, with this how the Russians extracted Zaporozhets’ ‘confession’ to the supposed plans for a terrorist attack.

Artem Girieiev from the Zmina Human Rights Centre reports that Ukraine has recognized Zaporozhets as a military serviceman, and his lawyer is stressing that any activities of a sabotage nature were carried out in accordance with his duties as a serviceman.  He should therefore be treated as a prisoner of war and must not be tried for his actions as a combatant.

Russia, which is still insisting on calling its war of aggression against Ukraine a ‘special military operation’, is, of course, ignoring all such requirements of international law.   It is likely that it is planning similar ‘terrorism trials’ against five men seized in Melitopol and now held in occupied Crimea: Andriy Holubiev; Ihor Horlov; Yuriy Petrov; Volodymyr Zuyev and Oleksandr Zhukov.

Even if these men were involved in the resistance, the very fact that the country which invaded Ukraine, is seizing and torturing hostages and bombing and killing civilians, should be accusing them of ‘terrorism’ defies belief.

It is almost certainly no coincidence that Russia has escalated its extraordinary persecution of Crimean Tatars on charges of involvement, while in mainland Ukraine, in the Noman Çelebicihan Battalion, an entirely legal and civic formation which, despite its name, is unarmed and not engaged in fighting. The Battalion has long ceased to exist, yet at the beginning of June, Russia’s Supreme Court declared it a ‘terrorist organization’.  It is probably only a matter of time before terrorism charges are applied.  There have already been numerous abductions from newly occupied territory, with the victims then ‘sentenced’, in conveyor belt ‘trials’, to terms of imprisonment up to 10 years.  For the moment they are accused of “taking part in the activities of an unlawful armed formation acting on the territory of a foreign country for purposes which are against the interests of the Russian Federation”, under Article 208 § 2 of Russia’s criminal code (more details here). In one case, that of 20-year-old Appaz Kurtamet, he was only formally charged three months after the FSB abducted him as he tried to enter occupied Crimea to visit relatives.

Although ‘Battalion’ charges chiefly serve as a vehicle for FSB persecution of Crimean Tatars, related charges are also being used against Oleksiy Kiselyov, former commander of the Ukrainian Navy’s Slavutych Command Ship, who was abducted from his home in occupied Henichesk (Kherson oblast), savagely tortured and is now ‘on trial’ in occupied Crimea.

It is also noteworthy that in several other cases, in particular that of Oleksandr Babych, Head of Hola Prystan, Iryna Horobtsova and civic activist Serhiy Tsyhipa, it remains unclear what, if any, real charges have been laid despite all having been in Russian custody for six months or more.