Invaders threaten to take children away if parents don’t send them to be indoctrinated ‘to love Russia’ Teachers in occupied Kherson refuse to collaborate with Russian occupiers Russia uses terror and abduction in attempt to force schools to collaborate in occupied Melitopol Mayor of Melitopol Ivan Fedorov abducted after refusing to collaborate with the Russian invaders Russian priest arrested and prosecuted for sermon opposing Russia’s war against Ukraine Russia effectively admits it deliberately bombed the maternity hospital in Mariupol that killed three patients, including a childRussia brings grotesque propaganda to Berdiansk after Ukrainian journalists refuse to collaborate Russian invaders murder Ukrainian volunteers Impassioned appeal from Ukrainian Muslim leader in face of Russia’s war to destroy Ukraine Russia is forcing Ukrainians from occupied Crimea and Donbas to fight in its invasion of Ukraine Children among the dead after Russian invaders opened fire on fleeing civilians Russia installs its propaganda TV after seizing Kherson and imposes 15-year sentences for reporting its invasion of UkraineUkrainian survivors of the Holocaust demand Putin and Russia get out of Ukraine Russia continues its carnage, flouting binding order from ECHR to stop bombing civilians in UkraineBabyn Yar bombed by Russia, 80 years after Nazi Massacre of Ukrainian Jews Russia proposes 15-year sentences and threatens "treason charges" for telling the truth about its war crimes in UkraineRussian schoolchildren told that Russia is bombing and killing Ukrainian children in ‘self-defence’ Putin miscalculated. Russia is fighting “an army of 40 million Ukrainians” Chief Rabbi of Ukraine demolishes Putin’s excuse for Russia’s invasion Russia bombs a Ukrainian kindergarten and apartments in its war against independent Ukraine
• Topics / War crimes
• Topics / Children’s rights 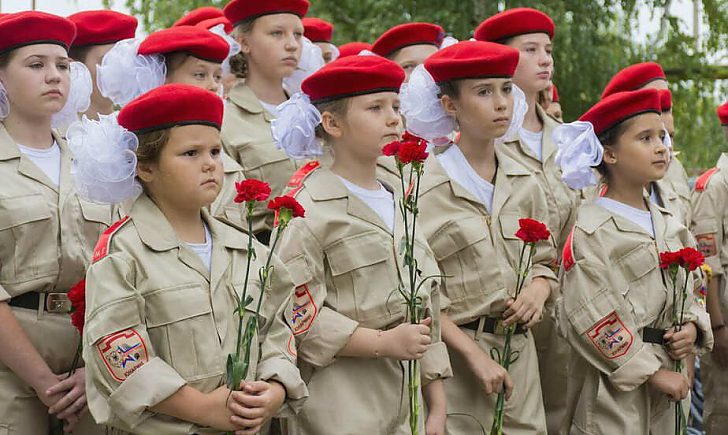 As soon as Russia seizes any Ukrainian territory, it blocks Ukrainian media, replacing this with its propaganda channels, and sets about ensuring the total indoctrination of children.  The aims are brutally simple: to distort the facts, presenting Russia, not as the aggressor and an occupying state, but as ‘liberator’, Ukraine as the enemy.  Most terrifyingly, the current regime in Russia devotes huge effort and means to trying to convince Ukrainian children that they must wish to fight and ‘defend’ the aggressor state.

Ivan Fedorov, Mayor of Melitopol (Zaporizhzhia oblast), reported on 6 November that the invaders occupying his city are intensifying their ideological pressure on children and trying to turn them into loyal subjects of a terrorist state.  As well as imposing Russian textbooks, with their total distortion of history and of current events, the invaders are planning to teach the rudiments of military training.  Fedorov suggests that this is to train kids for possible participation in so-called ‘volunteer battalions’.

The Russian occupation ‘authorities’ claim to have combined several Melitopol universities and created their own one.  At this fake institution, Fedorov reports, they are forming units of Russia’s so-called ‘Yunarmia’, or ‘Youth Army’.  Fedorov describes this as preparing future cannon fodder for the invaders’ army and security service.  He calls propaganda of war a crime and such propaganda among minors a crime against humanity.

Yunarmia was initiated by Russia’s defence ministry back in January 2016.  It was described by the ministry as having emerged “at the initiative” of defence minister Sergei Shoigu and as being “supported by  Russian leader Vladimir Putin.  Yunarmia has elicited unfavourable comparisons with the Nazis’ HitlerJugend, while its founders talk about its role in the so-called “military-patriotic upbringing of young people”.

There are already grounds for concern about Russia’s militarization of childhood and attempts to glorify war and the armed forces in its own country.  The problem is, however, exacerbated by the fact that Russia is pushing this militarization on illegally occupied Ukrainian territory.  Approximately four thousand Crimean children were ‘recruited’ into Yunarmia in 2021 alone, with the overall number of Crimean members at that time having reportedly reached 29 thousand.  There were similar organizations in the Russian proxy ‘Donetsk and Luhansk people’s republics’.  Children are taught how to use firearms and indoctrinated with the aggressor state’s propaganda regarding ‘patriotism’ and ‘the enemy’.  Such militarization on occupied territory is a war crime, one which Russia is now repeating in parts of the Donetsk; Luhansk; Kherson; and Zaporizhzhia oblasts seized since Russia’s full-scale invasion.

The Mariupol City Council reported back on 26 August that Russia was staging ‘children’s camps’, with young people wearing Yunarmia uniforms and being taught “to shoot and to hate Ukraine”.  The information available about what children are taught in the Crimean Yunarmia makes it clear that the Mariupol Council’s words are in no way an exaggeration.

As reported, Russia has tried to take over schools and other educational institutions wherever it seized control with its motives having nothing to do with concern about children’s education.   In all such cases, the aim is to impose the Russian curriculum, and specifically Russia’s distorted presentation of history and ideas about ‘patriotism’.  Anatoly Bondarchuk began his recent study of the situation with education on occupied territory by citing the famous words from George Orwell’s 1984: “Who controls the past controls the future. Who controls the present controls the past.”  The Kremlin, he says, knows that the main way of rewriting history is through schools, and for that reason Ukrainian education is one of the Russian invaders’ chief points of pressure.

Long before Russia staged its fake referendums on ‘joining Russia’, it began installing its own curriculum and removing Ukrainian textbooks, especially those on history.  From schools in occupied Luhansk oblast around 22 thousand Ukrainian history textbooks were removed and taken away in an unknown direction. All books from the library of the Petro Mohyla Church in Mariupol were burned.

The Russian invaders have encountered firm resistance from both teachers and parents and have resorted to measures of terror.  Several school directors and teachers have been abducted. On 28 March, Iryna Shcherbak, Head of the Department of Education within the Melitopol City Council, was abducted after she refused to collaborate with the Russians and restart schools under a Russian syllabus.  At the beginning of May, the invaders seized Olha Nikolayeva, a teacher of Ukrainian language and literature from School No. 3 in Berdiansk.  Two teachers from Nova Kakhovka (Kherson oblast) – Oksana Yakubova and Iryna Dubas – were abducted at the end of August.  None of these, nor others, have been seen since.  Other methods have been used to put pressure on teachers.  In Mariupol, the invaders threatened to deprive those who refused to collaborate of humanitarian aid, which is vital for survival in the city that Russia has destroyed through its relentless bombing and shelling.

There have been threats to take people’s children from them if they do not send them to Russian-controlled schools.

The measures have, however, largely failed, with the number of students on occupied territory sent to Russian-controlled ‘schools’ relative small.

Russia pushed through fake ‘referendums’ in September in order to then claim that occupied parts of Ukraine had ‘become Russian’.  Those in western countries now pushing Kyiv to ‘negotiate peace’ with Russia might like to consider what scope for compromise they would find if their children were suddenly told that they were now citizens of the invading state bombing their country, and that their real compatriots were not the victims of Russia’s unprovoked attack, but their enemy.   This is what Russia is imposing, with the use of terror, on those parts of Ukraine it has seized, and will continue if not stopped.