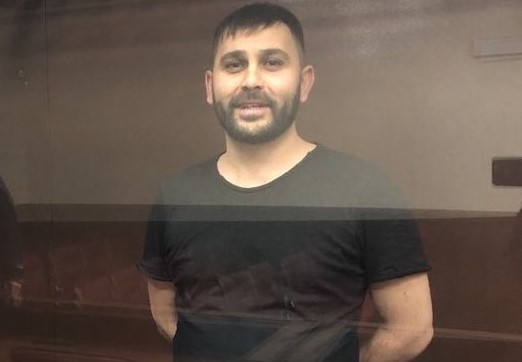 A Russian court has sentenced Marlen Mustafayev to 17 years’ imprisonment on preposterous charges copy-pasted from another political trial initiated over three years ago.  Everything about the ‘case’ against the Crimean Solidarity civic activist was shoddy, from the ‘prohibited literature’ that the FSB [Russian security service] openly planted in his home to the ‘secret witnesses’ who had probably never set eyes on the defendant.  In occupied Crimea, they have no reason to make any effort since these conveyor belt ‘trials’ are guaranteed to bring promotion and / or bonuses, and the ‘judges’ effectively always provide the sentence demanded of them.

During his final address, Mustafayev named the FSB officers who took part in the first act of this performance – in violently bursting into Mustafayev’s home, although he was coming to open the door, and then in staging an ‘armed search’ in which they scarcely bothered to conceal that they were claiming to have ‘found’ prohibited religious that they had brought with them.  These men are like screenwriters, Mustafayev said.  They write a script and send a man to prison for years.

In Russian-occupied Crimea, the FSB have a specific method of choosing defendants, with these increasingly men who take an active civic stand, helping political prisoners and members of their families, and often helping to ensure that their compatriots and people in other countries know about Russia’s repression against Crimean Tatars and other Ukrainians.

34-year-old Marlen Mustafayev is married with two children, and supported his family by working as a car mechanic.  He also actively attended political trials and helped the families of the ever-mounting number of Crimean Tatar and other Ukrainian political prisoners.  He was one of around 100 Crimean Tatars prosecuted and fined in December 2017 following peaceful single-person pickets in support of political prisoners.  Mustafayev was involved, from 2017, in the vital Crimean Solidarity human rights movement which has come under particular fire from the Russian occupation regime and the FSB.  Mustafa Seidaliev, Crimean Coordinator, is in no date that it was this civic activism, his constant presence at political trials, supporting those on ‘trial’, that led to him becoming the victim of persecution himself.

This was an exceptionally cynical persecution since Mustafayev was only arrested on 9 February 2022, although the so-called ‘terrorism’ charges were essentially identical to those against four other recognized political prisoners, three of whom were arrested back in June 2019.  If the FSB had seriously considered Mustafayev to be a ‘terrorist’, they would not have waited almost three years before arresting him.

Following this extraordinary delay, the ‘case’ was brought to the notorious Southern District Military Court in Rostov (Russia) with record haste, and culminated in the conviction on 30 November 2022,

On 18 November, prosecutor Vladislav Kuznetsov had demanded an 18-year sentence, with the first five years in a prison, the very worst of Russian penal institutions and the rest in a harsh-regime prison colony, which will be thousands of kilometres from his family and home in occupied Crimea.  On 30 November, a panel of ‘judges’ - Roman Plisko (presiding), Igor Kostin and Alexei Sannikov, passed only a slightly shorter sentence - 17 years’ harsh regime imprisonment, with the first three in a prison.

The sentence is not final, and will, of course, be appealed, but these are conveyor belt ‘trials’ and sentences, which Russian courts of appeal seldom change significantly. In all these ‘trials’, the presiding ‘judges’ tend to behave as though they are on the side of the prosecutor, and Plisko was no exception.

Like the four other political prisoners from Bilohirsk (Rus. Belogorsk) convicted earlier, Marlen Mustafayev was charged with ‘terrorism’ but not accused of any recognizable crime.  Like Enver Omerov (b. 1961); his son Riza Omerov (b. 1988); Aider Dzhapparov (b. 1980); and Azamat Eyupov (b. 1963), the Crimean Solidarity activist was essentially accused only of unproven involvement in the peaceful transnational Hizb ut-Tahrir Muslim organization which is legal in Ukraine and which is not known to have committed any acts of terrorism or violence anywhere in the world.   The Russian Supreme Court ruling in 2003 which declared Hizb ut-Tahrir a ‘terrorist’ organization was deliberately kept secret until it was too late to challenge it, and Russia has never provided any convincing justification for the decision.  The other four men were recognized by the Memorial Human Rights Centre as political prisoners (before Russia formally dissolved the NGO), and the same arguments apply in equal measure to the prosecution of Marlen Mustafayev.

The only variable in this conveyor belt persecution is whether the FSB claim that the person they arrest ‘organized’ a purported Hizb ut-Tahrir group, or merely took part in it.  The distinction often seems very arbitrary, but it carries a difference in sentence of five years or more.  In this ‘case’, Mustafayev was, like Enver Omerov; Aider Dzhapparov; and Azamat Eyupov before him, charged with being an ‘organizer’, under Article 205.5 § 1 of Russia’s criminal code and also accused of ‘planning to violently seize power’, under Article 278.  As noted by Memorial HRC, the arguments used to justify this second charge are identical to those used for the ‘terrorism’ charge, and seem clearly aimed only at propaganda and at justifying huge sentences.  The situation is surely grotesque when Eyupov, who was only arrested on 7 February 2021, and Mustafayev, a full year later again, are accused of having been ’organizers’ years after the first arrests. There is also another shocking aspect to Eyupov’s case since the FSB mixed up his voice with somebody else’s and he was not present at the meeting used to justify the charges.

The alleged ‘evidence’ used in such prosecutions is as flawed as the actual charges.  In Mustafayev’s case, as in many others, the FSB planted so-called ‘prohibited religious literature’ during the armed search and arrest.  In all such cases, the men’s lawyers are prevented from being present, with Russian courts guaranteed to ignore both the illegality of blocking access to lawyers, and testimony that the books were planted.  This is despite the fact that the FSB generally leave the books in places which no devout Muslim would use to keep religious material.

The rest of the ‘proof’ is equally dubious, with FSB-loyal ‘experts’ essentially willing to claim whatever is required to ‘prove ‘involvement’ and the main ‘evidence’ provided by anonymous ‘witnesses’.  There is no proof of any danger to justify allowing witnesses to appear in secret, so it is especially shocking that such ‘testimony’ is often the main part of the prosecution’s case.  The court goes along with this, although the alleged ‘witnesses’ often appear to be reciting what they have learned off by heart; and cannot answer the simplest question proving that they genuinely know the defendant.  It is, in fact, clear that the court is well-aware that such ‘testimony’ is fraudulent, since it regularly blocks defence questions aimed at demonstrating that these alleged ‘witnesses’ are lying.

On 18 July 2022, the same court (but different ‘judges’) sentenced Azamat Eyupov, a veteran of the Crimean Tatar national movement, to 17 years’ imprisonment. The charges and ‘evidence’ were all the same, only Eyupov’s voice was not even present on the illicitly made tapes. Eyupov is already 59 and in very poor health and there is next to no chance that he would survive the sentence.

It is quite possible that Marlen Mustafayev will not be the last victim in what is known as the ‘Bilohirsk case’.  These prosecutions bring material or career advantages to the FSB, while requiring next to no work. The Russian FSB can claim they are ‘fighting terrorism’ while merely copy-pasting a document or two and obtaining flawed ‘opinions’ from FSB-loyal ‘experts’.

Please write to Marlen Mustafayev, and, if possible, to one or two of the other men!  Letters show them that they are not forgotten and ensure that both the prison staff and Moscow know that their actions are under scrutiny. Letters need to be in Russian, and on ‘safe’ subjects.  If that is a problem, use the sample letter below (copying it by hand), perhaps adding a picture or photo. Do add a return address so that he can answer.