Men in occupied Donbas forcibly mobilized to die on the frontline 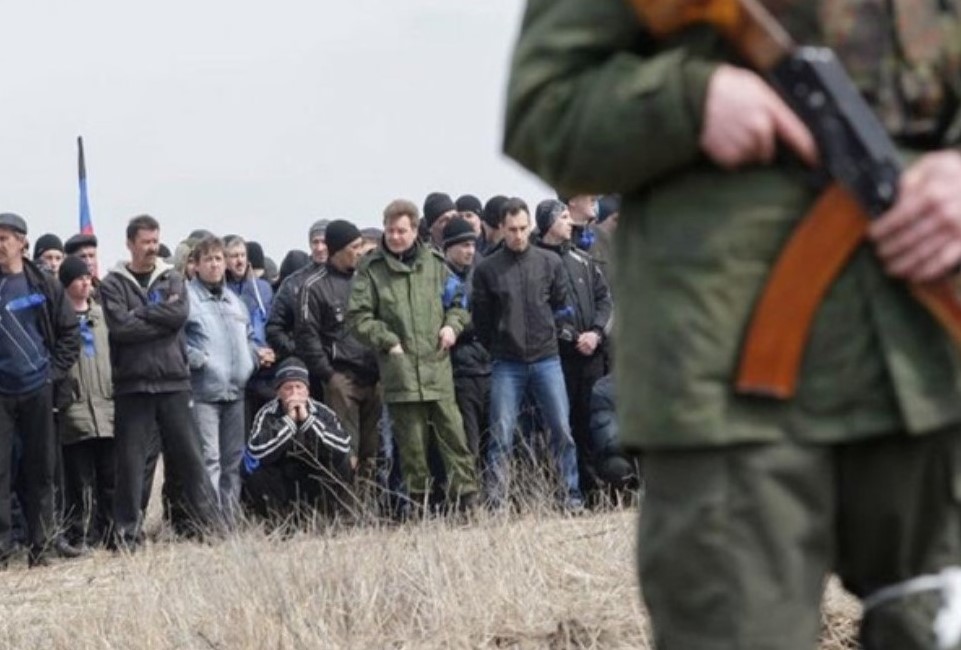 Russia is intensifying its efforts to mobilize any males in occupied parts of Ukraine, with men from occupied parts of the Luhansk oblast sent to the frontline, regardless of their age, state of health or number of children.  At least 58% of all miners in the oblast have been sent to the front against their will, with this very likely contributing to the other reasons linked with Russia’s savage war why residents of occupied Donbas will be freezing this winter.

Ukraine’s National Resistance Centre reported on 11 December that men in occupied Melitopol [Zaporizhzhia oblast] are being sent text messages, demanding that they appear at the occupation command centre.  For the moment, the aggressor state is pretending that those forcibly mobilized after Russia’s full-scale invasion and its farcical ‘referendum on joining the Russian Federation’ are ‘volunteers’.

There was never any such pretence in the Russian proxy ‘Donetsk and Luhansk people’s republics’ [DPR, LPR], with the first ‘mobilization’ essentially coinciding with the beginning of Russia’s full-scale invasion.  In a television interview on 11 December, Serhiy Haidai, Luhansk Regional Governor, confirmed that the invaders are still trying to hunt down any males in order to send them to the front, however unfit they are for military service.  He said that the men are sent to fight, after a mere two or three weeks’ ‘training’, with the men’s commanders often abandoning them there, without any food or water.  They are essentially treated as cannon fodder, though here Haidai points out that the Russian military command’s treatment of forcibly mobilized Russians is little better.

The Russian-installed ‘LPR authorities’ admitted late in November that 58% of the territory’s miners have been ‘mobilized’,  Russia has already plundered the region’s mines and combined them into one company which it now looks set to destroy.  The National Resistance Centre reported on 29 November that the so-called ‘authorities’ had even asked Moscow to reduce the rate of the ‘mobilization’, to not leave the industry and the region facing disaster. This has clearly not happened.

Russian leader Vladimir Putin clearly avoided imposing mobilization at home for as long as he could, with the regime preferring to forcibly mobilize Ukrainians from occupied territory to fight its war.  Almost from the beginning of the full-scale invasion, the ‘authorities’ abandoned any pretence of medical commissions who would normally decide whether a person’s medical condition renders them unfit for mobilization.  Instead, virtually any men that they could catch were sent to fight, with minimal training and inadequate gear.  The reasons were brutally cynical:  Russia did not record the number of such deaths and did not need to pay compensation to the men’s families when they did not return.

Back in June, wives of many men from ‘DPR’ who had been seized at their workplace on 24 February and ‘mobilized’ issued an appeal. They said that they had not heard from their husbands since they had been taken away and all attempts to discover what had happened to them had been fruitless. The women’s spokesperson explained that they had received information that the men were supposed to return to the unit on 6 June, however only a small percentage had come back, with no information given about the other 200 men.   Human rights groups, monitoring Russia’s deportation of children to Russia or occupied Crimea, report that the disappearance of a huge number of men from occupied Donbas meant that many wives were forced to seek employment elsewhere, often leaving their children with parents or other relatives.  This has, in many cases, been used as a pretext for depriving the mothers of their parental rights and then sending their children to Russia for totally illegal ‘adoption’ (details here).