‘There were more than five thousand of us in the shelter’ — account of the first war days in Mariupol‘My mom wanted to take poison, but she learned from a letter that we were alive.’ The story of a doctor from Mariupol, part 2She found out she was pregnant the day Russia invaded‘There was a human being, and the body was torn apart in an instant’ — a Mariupol graduate who went through hell"Did the Chechens cut your heads? No? We will do it..."‘They were trying to kill me, but I wasn"t killed.’ — a story of a woman who saw the airstrike on the Drama Theater in Mariupol‘They shot at our feet, near us, and one guy was wounded with an electric shocker...’ ‘In a panic, people abandoned their bed-ridden relatives.’ А resident of Mariupol story about how people were coerced to leave for Russia‘I don’t want to see them in the dock. I want to see them dead,’ a man from the Mariupol Drama Theatre says“All the Buildings on our Street were Destroyed” (Rubizhne resident)“I Gave the Dogs Vodka to Keep Their Hearts Going” (Mariupol Resident)“I entered a store and burst into tears” — three weeks under bombardment in Mariupol ‘There were more than fifty bullets in the body of a friend’‘People flew in the air like leaves — there was such a strong explosion’‘The helicopter skimmed the treetops.’ Azov fighter tells of his evacuation from Mariupol.‘I was afraid that I won’t be killed at once but will be maimed’ – a resident of Rubizhne‘Mariupol Moses’: A Man Who Took 117 People Out Of The Besieged City On FootA resident of Mariupol is telling how she found civilians killed by a sniper‘I survived 21 days with a shard in my body. I was lucky’‘I washed and buried my brother riddled with shrapnel, and his bloodied and wounded mother was barely in time for the burial…’
• Voices of war

‘We just love Ukraine. Why do they harm us?’ — a pensioner from Mariupol couldn’t hold back tears

My name is Vira Mikitivna Tiata. I used to live with my husband but buried him in 2018, and now I am alone. All my life, for approximately 48 years, I have worked as a kindergarten teacher. I lived in Mariupol, on Lavitsky street 24, apt. 56. It is hard, of course, to realize that my house was destroyed.

In 2014, Russians began to bomb East Mariupol. We lived closer to the port, and Vostochny was on the other side of the city. We were worried and did not understand anything. And when people began to die, and the destruction began, I slowly began collecting my things. I gathered clothes and documents. Then, my nephew from Yakutia called me: “How is your situation there?” It was on the 24th [2022]. I responded: “Tolya, everything is fine with us so far.” Around 4 March, heavy shelling began. My neighbor and I were hiding in the toilet covered with pillows. I have a three-room apartment in a five-story building.

Then cars caught fire near the house, and the windows flew out; the shell hit the transformer, and the neighbors on the first floor and another from the third entryway died.

Below the apartments was a store, and we hid there in the basement. I spent several nights there. But it was freezing. Tanya [neighbor] said: “Let’s hide in your toilet.” Then more and more GRADs [rockets] fell. First, all the windows with frames and doors flew out at the entrance. Then the windows on my balcony were damaged. I just renovated. A shell fragment hit the balcony. I didn’t know how it slowed down as my neighbor, and I were in the toilet. After that, we went to the Lyceum with her, to the shelter. Of course, there were no amenities there.

We arrived there around 10 March. People were already cooking food on bricks. They made porridge and pasta. When the bombing ended, the men ran to the medical facility to bring chairs, school desks, and everything we could sit on. They carried mattresses from a kindergarten. I took a blanket from home, and a neighbor took provisions and a sleeping bag. We slept on chairs. Volunteers brought us water and some food. I had meat left in the refrigerator, and we brought some cereal. The daredevils went out to the threshold and cooked there. Some porridge in the morning, soup for lunch.

We had children with us, even babies. There was a family with five children. Desks and boards were brought from the medical branch; we made makeshift beds and covered them with mattresses. We lived there, and, of course, the children were fed first.

What happened on the streets?

We were bombed so that the windows shook. Sometimes it was so scary that we squatted. They attacked because there was a ravine nearby where our troops were located. There was such an expression - they responded. Ours shot, and there would be an answer. We understood this and tried not to leave the shelter. There were certain rules of conduct. In truth, I forgot a lot.

How much time did you spend in the basement?

It was probably 12 days. I don’t remember exactly when we went to the shelter. Later my children came for me. They were in the port, and there was less shelling from the sea. Russians came from Volnovakha. When Volnovakha was smashed, then they went to Mariupol. Somewhere on the 18 March, the children arrived, and we went to my apartment. I had a parrot there, and we came because of him and took some things. I was disoriented but took the bags packed long ago, and we went to the children’s place. On the same day, we decided to leave the city because it was no longer possible to be there.

The shelling was terrible; there were explosions, cars were burning, and the houses were all black. Our building burned down from the bombing. All the windows and doors flew out; I have double doors, but they also broke. The balcony collapsed.

The balcony was pushed inside my neighbor’s apartment on the fifth floor, and she remained in the Lyceum. She tried to call me once, but I didn’t have a phone; I left it in the apartment and couldn’t talk to her. She saw me later and said my wall [furniture] collapsed, and the windows flew out. I don't know what was left there, but all the windows were cracked earlier, although we taped them up. 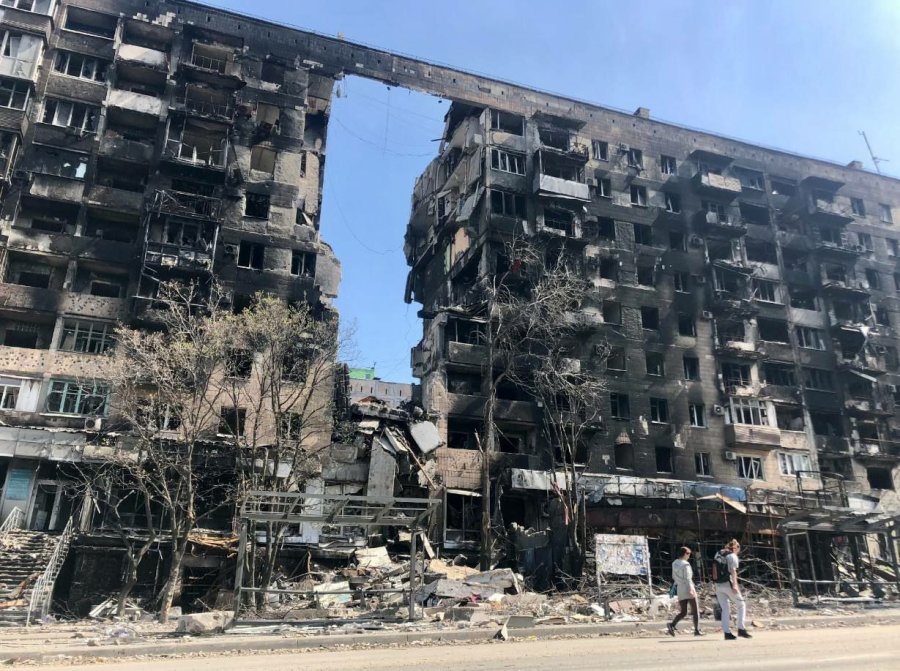 What happened to your property?

I don't know, as I left everything behind. Everything we've gained since 1963. Everything we had ... I bought a new refrigerator, “tore it away from myself,” as they say. My husband and I worked. We bought a stove, euro-windows and built a new balcony. All this was destroyed. A neighbor from the fifth floor said double doors flew out, and someone propped them up with a stick.

What about the neighbors?

You see, many left immediately. Many hid in shelters. A guy with his wife was on the second floor in the one-room apartment. Tatyana and I stayed on the fifth. There was another neighbor left (her husband has a disability); he walked with a walker. All the rest was gone.

How did you get out of the city?

The children called and said: “What are you thinking!? Already half of Mariupol is gone, but you stay put." They bombed the dentistry on Mir Street. Many died there during the collapse. Then it started at the Drama Theatre, where people were hiding. The houses around were all destroyed. Drama Theater too. So they called and said: "Leave urgently." They came and took me away. I took what I could, hurried in a panic, and did not know what to do. We took only a blanket and a bag I had previously packed. We left their house on 11 Polunina Street and drove to Gagarin Street, to the regional hospital. There was a long queue of cars: people were in damaged cars, with broken windows, in cars that had been shot through. Instead of 20 minutes, we drove 6 hours until we left the city. After that, the traffic became lighter. Some went one way, and some went the other.

Did the Russian military fire at the civilian cars?

There were such cases before us. When we left, this was not the case. There were cars shot through, without windows. But we heard good vehicles were taken away. A man came out at a Russian checkpoint to show his documents, then they pushed him out and confiscated his car. When we were under fire, a husband and wife were wounded: his arms were torn off, and his wife's legs. People tried to leave. They announced a green corridor, so we left. On the 18th, I think, at noon. We arrived in Ananyevo, Odessa region. Well, where to go? My brother is in Russia, but we would never go there, even though it's closer.

What are you planning to do next?

You know, I want to go back to my native city. But people who left later said that the city was utterly destroyed. So many people were buried… At first, people were buried in gardens owned by peaceful civilians whose houses were ruined. Then they began to bury in the parks. And later, they were buried near their homes when things became impossible. The neighbor I was talking about was killed by a shell and buried by a husband and wife who lived on the second floor.

She was buried next to the house. They put a note in the bottle: who is she, where is she from, from which apartment. But I don't think the grave was dug. So they must have covered the body with the earth.

When the neighbors left the fifth floor, they saw a lot of crosses on Shevchenko Street. All this is terrible. They say that in the summer, there were unsanitary conditions. Although the occupiers said they would provide water, there is nothing of this. Everything is destroyed, and all pipes are broken. What kind of water? I don't know how it is there now. I don't know, but I think there is nothing good. You heard about Azovstal. Poor guys. I do not know what to say. I can't speak without words. 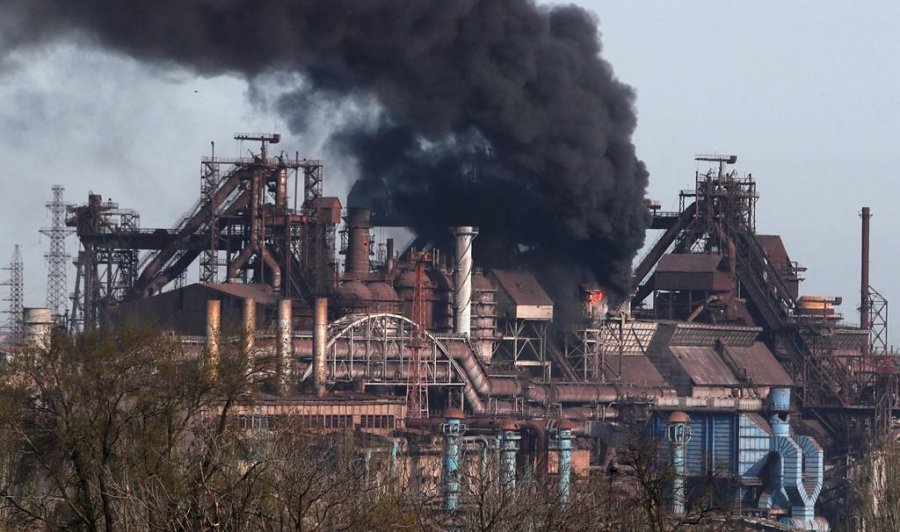 Has your attitude towards Russians changed?

I am a mother; I have a son in Russia. Both are my sons, but the one who lives in Ukraine does not want to listen to anything. He is outraged. I said: “Valera, this is your brother…”. All nations were mixed up, and all people were brothers and lived together. And here it is. Who is to blame? Are we to blame? Of course not.

It so happened that we love our country — Ukraine. It is my homeland. Although I was not born here, I have lived and worked all my life here for over sixty years.

Ukraine is my home. My sons were born in Ukraine and studied at Ukrainian schools. And now this. Why do they punish us? I don't know. What did we do? I can't speak without tears... 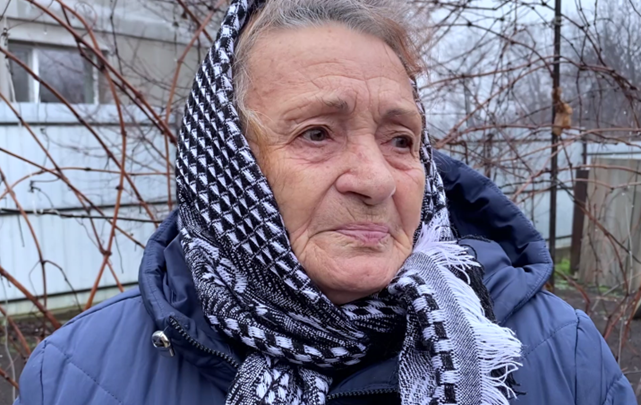 Vira Tiata, Mariupol
The article was prepared by the Kharkiv Human Rights Protection Group with the support of the Prague Civil Society Centre
Share this
x