Putin will continue attacking until Russia is stopped. Help Ukraine defend its freedom today!Russian Rule of Lawlessness in Occupied Crimea and DonbasChief Rabbi of Ukraine demolishes Putin’s excuse for Russia’s invasion Putin miscalculated. Russia is fighting “an army of 40 million Ukrainians” Russian schoolchildren told that Russia is bombing and killing Ukrainian children in ‘self-defence’ Russia proposes 15-year sentences and threatens "treason charges" for telling the truth about its war crimes in UkraineBabyn Yar bombed by Russia, 80 years after Nazi Massacre of Ukrainian Jews Russia continues its carnage, flouting binding order from ECHR to stop bombing civilians in UkraineUkrainian sportsman tortured to death by Russian invadersUkrainian survivors of the Holocaust demand Putin and Russia get out of Ukraine Russia installs its propaganda TV after seizing Kherson and imposes 15-year sentences for reporting its invasion of UkraineCrimean teacher dismissed and threatened with prosecution for telling students the truth about Russia’s war against UkraineChildren among the dead after Russian invaders opened fire on fleeing civilians Russia is forcing Ukrainians from occupied Crimea and Donbas to fight in its invasion of Ukraine Russian soldiers risk prison or injure themselves so as to not fight in Ukraine Impassioned appeal from Ukrainian Muslim leader in face of Russia’s war to destroy Ukraine Russian invaders murder Ukrainian volunteers Russia brings grotesque propaganda to Berdiansk after Ukrainian journalists refuse to collaborate Russia effectively admits it deliberately bombed the maternity hospital in Mariupol that killed three patients, including a childRussian priest arrested and prosecuted for sermon opposing Russia’s war against Ukraine
• Topics / War crimes 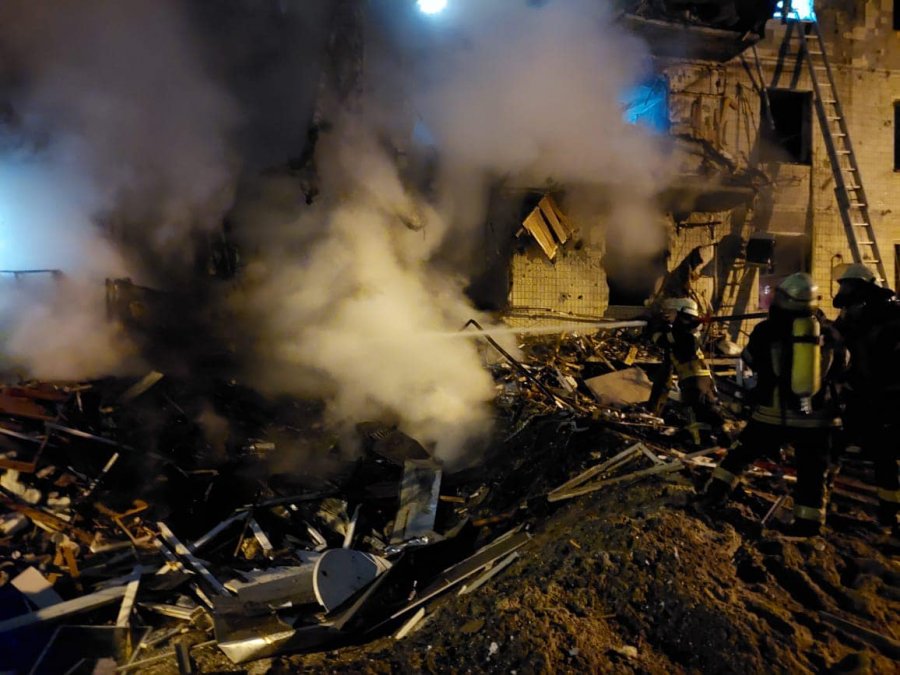 Russia is believed to have aimed around 200 ballistic and cruise missiles at Ukraine over the last 48 hours, with some hitting residential areas.  It is unclear, but fundamentally immaterial whether Moscow is deliberately targeting the civilian population or simply couldn’t care less whom it kills in this deranged attack on independent Ukraine.

Ukraine’s Foreign Minister Dmytro Kuleba reported early on Friday afternoon that there had been Russian attacks on both a kindergarten and an orphanage.  He rightly pointed out that these are war crimes and stated that they were collecting information about all such crimes for the International Criminal Court at the Hague.

ICC Prosecutor Karim Khan stated on 25 February that the Court is closely following developments in Ukraine and that it may investigate possible war crimes. “"I remind all sides conducting hostilities on the territory of Ukraine that my office may exercise its jurisdiction and investigate any act of genocide, crime against humanity or war crime committed within Ukraine."

All international courts take a very long time and no investigation will protect Ukraine from a powerful enemy, nonetheless it is very important that all crimes are documented.  In December 2020, the then ICC Chief Prosecutor, Fatou Bensouda stated that she had found reasonable grounds for believing that war crimes and crimes against humanity, falling within ICC jurisdiction had been committed in occupied Crimea and Donbas.  One of the crimes that will surely fall within the Court’s scope was the downing by a Russian military Buk missile of Malaysian airliner MH17 over militant-occupied Donbas.  Russia has been denying its direct and pivot role in the conflict in Donbas, so that decision is of enormous importance.  Since the night of 23/24 February, Moscow stopped pretending, although it is still regurgitating insane lies about Ukraine’s supposedly neo-Nazi leaders (presumably including Ukraine’s President Volodymyr Zelensky who is Jewish).

It will doubtless try to deny its responsibility for the shelling on 25 February of the Solnyshko Kindergarten in Okhtyrka (in the Sumy oblast).  According to the official report, two missiles hit the two-storey kindergarten building, with a guard killed, a female employee injured, and two children hospitalized with shrapnel injuries. There are probably situations in war where it is difficult to prove whose missile was to blame for a death.  Here the world is watching as Ukraine’s very existence as a free and independent country is at threat from an invading power which is pummelling Ukrainian cities with missiles.  It was clearly those missiles that caused the devastation to apartment blocks in Kyiv in the early hours of 24 February.  It is only because so many people had sought refuge in bomb shelters not previously needed since World War II, that there was not heavy loss of life (the extent of the damage can be viewed in the video here).

The thirteen border guards killed on Zmiyiny [Snake] Island in the Black Sea were gunned down after they (robustly) rejected the demand from the invading Russian forces that they surrender Ukrainian territory.

The photos and videos of bombed apartment blocks, of a Russian tank running over a civilian car, of the bombed kindergarten are real and can be easily verified.  This is in marked contrast to the constant barrage of fake videos which Russia used in 2014 to try to claim that Ukraine was committing war crimes.  In June 2014, for example, Russian Foreign Minister Sergei Lavrov claimed that Ukraine was using prohibited phosphorous bombs, with the ‘proof’ he presented being video footage from Iraq in 2004.

Lavrov is now parroting Russian leader Vladimir Putin and his extraordinarily cynical claims that Russia’s invasion and attempt to overthrow its democratically elected leaders is an attempt at “demilitarization” and “denazification”.

It remains a mystery what Lavrov means by “all of this”.  Ukraine’s President Zelensky is almost certainly right in believing that he will be No. 1 on Russia’s hitlist if it succeeds in seizing power in Kyiv.  Not only is Zelensky Jewish, but he is also the grandson of a Ukrainian colonel who fought the Nazis throughout WWII.  Russia is using foul lies about some mythical ‘denazification’ in order to subject Ukrainians to bombing last inflicted on Ukraine by the Nazis 80 years ago.  If it succeeds, this is only the beginning of Ukrainians’ suffering.