Chief Rabbi of Ukraine demolishes Putin’s excuse for Russia’s invasion Russia bombs a Ukrainian kindergarten and apartments in its war against independent Ukraine Putin will continue attacking until Russia is stopped. Help Ukraine defend its freedom today!Russian Rule of Lawlessness in Occupied Crimea and DonbasRussian schoolchildren told that Russia is bombing and killing Ukrainian children in ‘self-defence’ Russia begins propaganda of war against Ukraine at pre-school level Russia proposes 15-year sentences and threatens 'treason charges' for telling the truth about its war crimes in UkraineBabyn Yar bombed by Russia, 80 years after Nazi Massacre of Ukrainian Jews Russia continues its carnage, flouting binding order from ECHR to stop bombing civilians in UkraineUkrainian sportsman tortured to death by Russian invadersUkrainian survivors of the Holocaust demand Putin and Russia get out of Ukraine Russia installs its propaganda TV after seizing Kherson and imposes 15-year sentences for reporting its invasion of UkraineCrimean teacher dismissed and threatened with prosecution for telling students the truth about Russia’s war against UkraineChildren among the dead after Russian invaders opened fire on fleeing civilians Russia is forcing Ukrainians from occupied Crimea and Donbas to fight in its invasion of Ukraine Russian soldiers risk prison or injure themselves so as to not fight in Ukraine Impassioned appeal from Ukrainian Muslim leader in face of Russia’s war to destroy Ukraine Russian invaders murder Ukrainian volunteers Russia brings grotesque propaganda to Berdiansk after Ukrainian journalists refuse to collaborate Russia effectively admits it deliberately bombed the maternity hospital in Mariupol that killed three patients, including a child
• Topics / War crimes

Putin miscalculated. Russia is fighting “an army of 40 million Ukrainians” 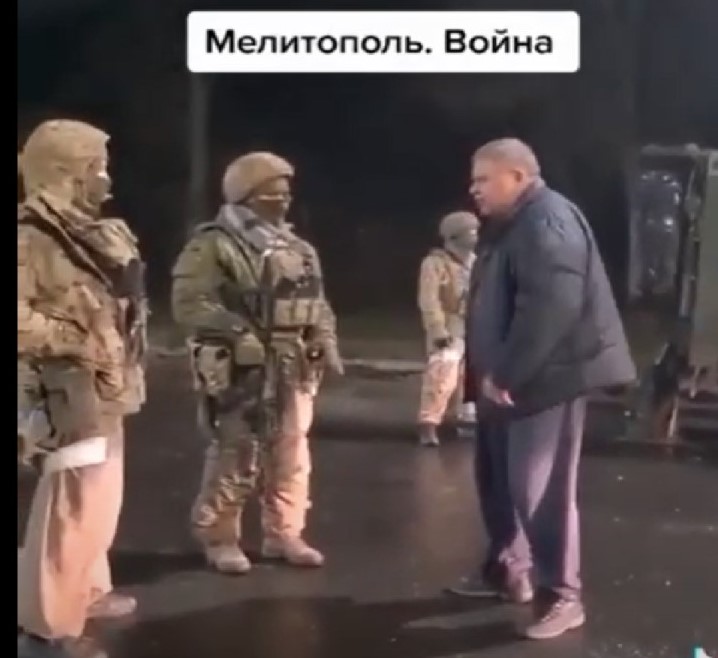 Ukraine is confronting a powerful enemy alone, and the outcome of Russia’s invasion cannot be guaranteed.  What, however, is already clear is that Ukrainians have achieved a significant victory in demolishing the Russian lies used to justify this war. Judging by Russian leader Vladimir Putin’s deranged call on the Ukrainian Army to abandon their posts, he appears to have seriously miscalculated whom he was dealing with. Not only are Ukraine’s Armed Forces repelling the invading Russian aggressor, but so too are huge numbers of other Ukrainians, including many without any weapons at all. In Koriukovka (Chernihiv oblast) on 27 February, a large number of Ukrainian men walked straight at the Russian tanks who were trying to move through their city (see the video here)..  On 25 February, a single woman confronted Russian soldiers who were claiming they were on ‘exercises’ in the Kherson oblast.  She called the men fascists, demanded to know what the hell they were doing in her country and offered them sunflower seeds, so that there would be some use from their bodies.  They are occupiers, she said, who have invaded her land.   In Melitopol (Zaporizhya oblast), an older man berated Russian soldiers, saying “do you not have your own problems?” and telling them to get out of Ukraine.  He also said that he was Russian himself but that Ukraine was his country, not theirs.

Rather than being greeted by flowers, Ukrainian journalist Denis Kazansky says, the Russian invaders have been met with weapons and with hatred.  And if Russian firepower proves able to occupy his land, they will be hated occupiers.

The world is seeing this, and is no longer looking away as it largely did in 2014.  Given that the weapons now promised from other countries were not sent earlier, they may prove too late to save more Ukrainian cities from falling to the invaders, but there will be no pretence that this is anything but armed occupation. 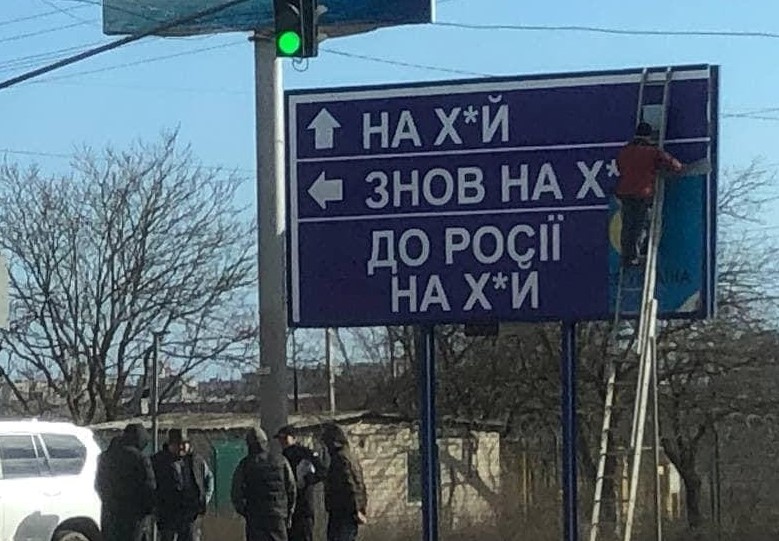 Entry to Chornomorsk (Odesa oblast) on 27 February. The sign being put up reads Straight ahead f**k off, to the left, also f**k off, and to the right, F**k off back to Russia Photo posted by Dumskaya.net

Over the last eight years (and more), Moscow has been using its vast propaganda machine to push the narrative that Ukraine is some kind of ‘failed state’ which could collapse any moment.  Since the night from 23-24 February, it has been mercilessly bombing not only military sites, but also residential areas, a kindergarten; civilian vehicles, including an ambulance, and causing untold suffering and destruction.  Far from being a failed state, Ukraine’s authorities have responded quickly and adequately, with a huge number of volunteers also stepping in to help the Armed Forces and civilian victims of Russia’s barbaric attacks.

On 26 February, Inna Sovsun, an MP from the Holos Party, wrote about the grassroots reaction to Russia’s invasion, with her blog entitled “We have an army of 40 million!”  Putin had unwisely judged by himself and his own country, she said, and thought that Ukraine’s soldiers are merely obeying orders and that it would suffice to intimidate and break a few people in charge of the country.

“In fact, however, Putin is fighting the entire country.  Russia has made each and every one of us its enemy. We have a level of self-organization which people in an authoritarian country are simply incapable of comprehending.”

She points out that tens of thousands of Ukrainians have joined the territorial civil defence and there are huge queues of people waiting to become blood donors for the Armed Forces.  Ordinary citizens in urban and rural areas are helping to ensure the failure of Russia’s ‘mighty army’ and its groups of saboteurs.  In Kyiv and other cities, people have been learning how to use rifles for several months, and in those places not under day curfew there are large queues of people waiting to officially receive rifles to help defend their city.

“A rubbish-sorting station is returning people bottles so that they can be used to make petrol bombs. Prominent academic chemists are writing instructions on how to best destroy the signs placed to guide enemy fire.”

Kyiv residents can be seen here making such petrol bombs, with this having been positively encouraged by Ukraine’s Defence Ministry.

There are a huge number of examples of such volunteer activities, and any number of Ukrainians who are not sitting back waiting passively for their village or cities to be invaded.  Polish employers have reported that up to a third of their Ukrainian employees have left in order to defend Ukraine.

Sovsun ended her text by suggesting that a video was needed to show Russians how civil society works in Ukraine, what solidarity and self-organization mean, “so that they understand that Putin’s chances against Ukraine are zero.  Such an excursion could be carried out by any person in Ukraine and therefore Russians have zero chance against us.

No dictator will conquer a country whose people organize themselves better on chats and social media than the entire Russian military headquarters altogether.”