Russia is forcing Ukrainians from occupied Crimea and Donbas to fight in its invasion of Ukraine Children among the dead after Russian invaders opened fire on fleeing civilians Russia installs its propaganda TV after seizing Kherson and imposes 15-year sentences for reporting its invasion of UkraineUkrainian survivors of the Holocaust demand Putin and Russia get out of Ukraine Russia continues its carnage, flouting binding order from ECHR to stop bombing civilians in UkraineBabyn Yar bombed by Russia, 80 years after Nazi Massacre of Ukrainian Jews Russia proposes 15-year sentences and threatens "treason charges" for telling the truth about its war crimes in UkraineRussian schoolchildren told that Russia is bombing and killing Ukrainian children in ‘self-defence’ Putin miscalculated. Russia is fighting “an army of 40 million Ukrainians” Chief Rabbi of Ukraine demolishes Putin’s excuse for Russia’s invasion Russia bombs a Ukrainian kindergarten and apartments in its war against independent Ukraine Putin will continue attacking until Russia is stopped. Help Ukraine defend its freedom today!Russian Rule of Lawlessness in Occupied Crimea and DonbasRussian invaders murder Ukrainian volunteers Russia brings grotesque propaganda to Berdiansk after Ukrainian journalists refuse to collaborate Russia effectively admits it deliberately bombed the maternity hospital in Mariupol that killed three patients, including a childRussian priest arrested and prosecuted for sermon opposing Russia’s war against Ukraine Mayor of Melitopol Ivan Fedorov abducted after refusing to collaborate with the Russian invaders Russia uses terror and abduction in attempt to force schools to collaborate in occupied Melitopol Ukrainian journalist Oleh Baturin feared abducted by Russian invaders in Kherson oblast
• Topics / Terrorism
• Topics / Freedom of conscience and religion 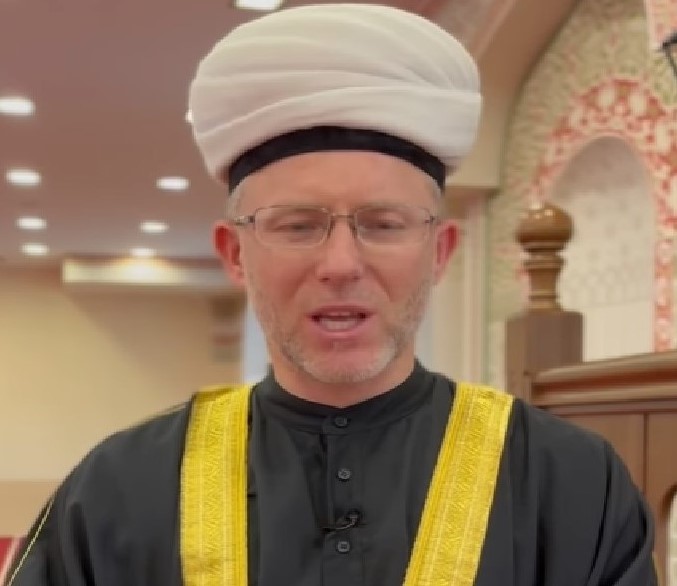 Sheikh Said Ismagilov, Mufti of the Spiritual Administration of Muslims of Ukraine ‘UMMA’, has called on Muslims in all countries to support Ukraine in its struggle against Russia’s invasion, and has also made an extremely hard-hitting address to Muslims in Russia.  Essentially all Ukraine’s religious leaders have come out with clear statements in defence of Ukraine and in condemnation of Russia’s aggression, even Metropolitan Onufriy, head of the Orthodox Church in Ukraine linked to the Moscow Patriarchate.

The address to Muslims in all countries was given in Ukrainian, and can be followed in English translation here.  The Mufti stresses that Russia is waging a war of aggression against Ukraine, aimed at killing Ukrainians, “at destroying our people, our statehood and our freedom”   This is an unjust war, with the troops sent by Russian leader Vladimir Putin killing civilians and destroying people’s homes.  He calls on Muslims everywhere to be on Ukraine’s side and to help in whatever way they can, and stresses that Ukraine is a country where Muslims are respected, “where we have an unprecedented level of rights and freedoms” and are “an organic part of Ukraine”  He adds that this is in marked contrast to the Russian Federation.

Said Ismagilov’s address to Muslims of the Russian Federation can be heard in Russian here and on YouTube.  Given Russia’s draconian measures aimed at preventing the population knowing the truth about its war against Ukraine, any help in ensuring that the address is heard would be welcome.

“I don’t know if you are aware, but at present an absolutely total war is being waged against our people, against the Ukrainian people and our state  Your media are lying to you. Your forces, your Russian forces have come here simply to kill us.  They are shelling homes and civilians, and I call on you, Muslims of Russia, to not take part in any way in this war, to not support the Putin regime.”

He goes on to ask what Russian Muslims are waiting for. While all Russia’s forces are deployed in Ukraine, while Ukraine’s heroic army is fighting them off, they should begin their own liberation movement in the Russian Federation. He points out that they are being deprived of their native languages, of their rights and freedoms; of their identity as Muslims and as individual peoples.

“Russia is a prison of nations. Begin your liberation while all of the dogs are fighting us here. We will fight them off. We will win.  You have the chance of self-determination; of freedom; [the chance] to reinstate your national, cultural and religious identity.”

Said Ismagilov was among many Ukrainian representatives of religious and national minorities who spoke out publicly in defence of Ukraine, “the peaceful home of all us” after Putin’s declaration of war in the early hours of 24 February 2022.

Since Moscow has resorted to a particularly foul lie, claiming that its savage war against Ukraine is aimed at “the demilitarization and denazification” of Ukraine, the clear message given by Chief Rabbi of Ukraine,  Yaakov Dov Bleich, was particularly welcome.  On 25 February, he stressed that “The Jewish community is an integral part of Ukraine and stands with the Ukrainian people, government and armed forces in defending Ukraine.”

Ukraine is a country of many faiths, and it is likely that the list of spiritual leaders who have spoken out against the war and in support of Ukraine is very much longer.  As with Said Ismagilov and Rabbi Bleich, there was nothing unexpected about the unequivocal support for Ukraine and its defenders taken by Metropolitan Epiphanius, Head of the Orthodox Church of Ukraine, and by Archbishop Sviatoslav Shevchuk, Head of the Ukrainian Greek Catholic Church.

It is the position of the Ukrainian Orthodox Church linked to the Moscow Patriarchate that had not, necessarily, been guaranteed.  The current Moscow Patriarch, Kirill, has long been known for sharing the same strident ‘Russian world ‘ views as Vladimir Putin.  Back in November 2009, Kirill stated  that “if we consider the Russian Federation with its present boundaries, then we have sinned against the historical truth and artificially cut off millions of people who are aware of their role in the fate of the Russian World and consider its creation their main deed.”

Kirill has made no more than a weak call “to all parties to the conflict” to avoid civilian casualties, and has certainly not condemned Russia’s evident targeting of civilians. On 27 February, his purported call to peace spoke of the so-called “evil forces [in Ukraine] that have always strived against the unity of Rus’ and the Russian Church, gain the upper hand”.

All of this ‘call to peace’ was widely interpreted as in support of Putin’s war against Ukraine, and led to considerable protest from Orthodox priests, many of whom have publicly refused to commemorate Kirill in their sermons.  Others have called on the Head of the Orthodox Church under the Moscow Patriarchate, Onufriy, to break with the Moscow Patriarchate

Russia’s aggression against Ukraine began back in 2014, however it was noticeable then and later that the only faith in either occupied Crimea or Donbas that did not come under fire was the Orthodox Church linked to the Moscow Patriarchate.  Although officially the latter did not take any position on the conflict in Donbas, it was certainly noticeable in the Verkhovna Rada back on 8 May 2014 that the only people who did not stand to commemorate 21 Ukrainian soldiers who had been killed in the war were Onufriy and two other representatives of the Church linked to the Moscow Patriarchate.  The latter was also the only faith that did not take part in the Prayer Marathon for Peace in Donetsk.

A 2015 study entitled ‘When God becomes the weapon’ identified systematic and widespread religious persecution, and also note that religion is one of the key motivating factors and justification cited for criminal activities by unlawful paramilitary groups within the Russian proxy ‘Donetsk and Luhansk people’s republics’.

As early as 24 February, before it became clear that Russia was bombing civilian targets and causing untold destruction and suffering, Onufriy came out with a very different message.  He called on believers to pray for Ukraine, its army and people and on Putin to end what he called a fratricidal war and “repetition of the sin of Cain”.

It seems unlikely, given the brutality of Russia’s attack on Ukraine, and the position taken by Kirill as head of the Moscow Patriarchate, that this will be enough to still the outrage and alienation very many believers are now experiencing.