Ukrainian journalist Oleh Baturin feared abducted by Russian invaders in Kherson oblast Mayor of Melitopol Ivan Fedorov abducted after refusing to collaborate with the Russian invaders Russian priest arrested and prosecuted for sermon opposing Russia’s war against Ukraine Russia effectively admits it deliberately bombed the maternity hospital in Mariupol that killed three patients, including a childRussia brings grotesque propaganda to Berdiansk after Ukrainian journalists refuse to collaborate Russian invaders murder Ukrainian volunteers Impassioned appeal from Ukrainian Muslim leader in face of Russia’s war to destroy Ukraine Russia is forcing Ukrainians from occupied Crimea and Donbas to fight in its invasion of Ukraine Children among the dead after Russian invaders opened fire on fleeing civilians Russia installs its propaganda TV after seizing Kherson and imposes 15-year sentences for reporting its invasion of UkraineUkrainian survivors of the Holocaust demand Putin and Russia get out of Ukraine Russia continues its carnage, flouting binding order from ECHR to stop bombing civilians in UkraineBabyn Yar bombed by Russia, 80 years after Nazi Massacre of Ukrainian Jews Russia proposes 15-year sentences and threatens "treason charges" for telling the truth about its war crimes in UkraineRussian schoolchildren told that Russia is bombing and killing Ukrainian children in ‘self-defence’ Putin miscalculated. Russia is fighting “an army of 40 million Ukrainians” Chief Rabbi of Ukraine demolishes Putin’s excuse for Russia’s invasion Russia bombs a Ukrainian kindergarten and apartments in its war against independent Ukraine Putin will continue attacking until Russia is stopped. Help Ukraine defend its freedom today!Russian Rule of Lawlessness in Occupied Crimea and Donbas
• Topics / War crimes 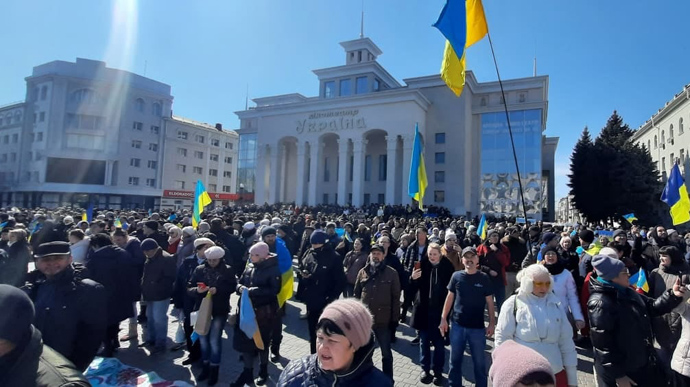 Invading Russian forces have seized a second Ukrainian mayor, as well as the head of a regional council in Melitopol, and a civic activist organizing information self-defence in occupied Nova Kakhovka.   Despite the clear threat from the invaders who have seized Kherson, as well as Berdiansk and Melitopol in the Zaporizhya oblast) several thousand people came out in Kherson on 13 March, chanting that “Kherson is Ukraine”, with residents in Berdiansk also holding both a procession and the daily demonstration, under Ukrainian flags.  The protests in Melitopol  are also continuing, with residents demanding the release of their mayor and undeterred by the abduction of a leading protester.  Such demonstrations and the opposition from local deputies clearly obstruct Russian attempts to set up a so-called ‘Kherson people’s republic’, and the Russians are resorting to methods of terror.

Yevhen Matvieyev, the Mayor of Dniprorudne (Zaporizhya oblast) was seized by Russian forces on 13 March, two days after the Mayor of Melitopol, Ivan Fedorov, was taken away, with a bag over his head, by the armed Russians who have seized control of the city.  The large public protests that were already taking place in Melitopol are continuing, with the local residents now particularly demanding the release of their Mayor.

The Melitopol Regional Information Agency reported on 13 March that “the terror is continuing in occupied Melitopol. The invaders are abducting representatives of the legally elected authorities and activists.” Russians had turned up at the home of Serhiy Pryima, head of the Melitopol  District Council, at 7.30 on 13 March, carried out a search and then taken Pryima away.

The agency added that nothing has been heard either of Olha Haisumova, the coordinator of the daily protests in Melitopol who was seized by the invaders on 12 March, at the first protest demanding the release of Mayor Fedorov.

It was after these abductions that Halyna Danylchenko, a deputy from the Melitopol  City Council from the (pro-Russian) ‘Opposition Bloc – For Life’ appeared on a televised address, stating that a so-called ‘committee of people’s representatives’ was being created which would govern Melitopol .

All of this is depressingly typical of the methods Russia used back in 2014.  It was, and has remained, typical of Russia’s methods in occupied Crimea and Donbas that those abducted are subjected to horrific torture to get them to take part in propaganda videos and there are very real fears for the safety of all of those who have been abducted.

Russia’s methods are, however, meeting serious resistance.  The Melitopol  City Council’s deputies responded to the attempt to impose a collaborating ‘administration’ through an address to Ukraine’s President Volodymyr Zelensky; the Prosecutor General Iryna Venediktova and to NATO member states.  In it, they write that the Russian invading forces are unleashing repression and mention the abductions of Ivan Fedorov; Leila Ibragimova, Deputy Head of the Zaporizhya Regional Council and Olha Haisumova.  They firmly reject the illegal attempt to impose an occupation administration under Danylchenko as supposed ‘acting mayor’.  In concluding, they ask the President to use all means available to him to secure the release of Mayor Fedorov and other civilians seized, the Prosecutor General to initiate criminal proceedings on treason charges against Danylchenko and NATO states to finally establish a no-fly zone over Ukraine.

There have been numerous reports, including from Kherson journalist Kostiantyn Ryzhenko, of civic activists and journalists facing persecution from the Russian invaders.  According to Ryzhenko, the Russians have lists of people who have spoken out against Russia’s invasion or who simply express a pro-Ukrainian position.  The lists also include those known to have photographed the movement of Russian equipment and passed on information to the Ukrainian enforcement bodies.  Hromadske reported back on 5 March that Rosgvardia and SOBR – a swift reaction special force  - had arrived in Kherson.  It is Rosgvardia fighters, Ryzhenko says, who are going around people’s homes and breaking down the doors of activists; former SBU [Security Service] officers and former military, as well as threatening journalists. He has been told that the Rosgvardia are looking for him also.

There have been at least two abductions in the neighbouring Kherson oblast.  As reported, Oleh Baturin, a journalist from Kakhovka in the Kherson oblast disappeared from a petrol station in Kakhovka on 12 March around the same time that Russian military had been spotted near the station.

Serhiy Tsyhipa is from neighbouring Nova Kakhovka which is under Russian occupation.  He had been organizing information self-defence in the city since the Russians invaded it on 24 February.  He reportedly went out with his dog at around 9.00 on 12 March, and has not been seen since.

Shortly before the invasion, Russian leader Vladimir Putin came out with nonsense about Russia’s aim supposedly being “the demilitarization and denazification of Ukraine”.  In fact, the first seizure of control was of the main structure of the Northern Crimean Canal and the Kakhovka Hydro-electric Power Station.  Putin’s claims about Crimea always having been ‘Russian’ came into unpleasant conflict with reality very swiftly as it became clear that, without mainland Ukraine, Crimea does not have enough water.  At least one of the motives for Russia’s new aggression is to grab more land in order to resolve this.

Russia’s attempt to create a fake ‘Kherson people’s republic’ hit another obstacle on 13 March, with Kherson Mayor Ihor Kolykhayev and the City Council joining their colleagues from the Kherson Regional Council in rejecting any suggestion of a so-called ‘referendum’ on creating such a fake ‘republic’.