Russia responds to International Court order to stop bombing Ukraine by destroying Mariupol Theatre sheltering familiesRussian invaders take Mariupol intensive care hospital and its patients hostage Mass graves of the Ukrainian civilians Russia claims it is not killingTerror and abductions as Russia tries to break Ukrainian resistance in Kherson and other occupied citiesUkrainian journalist Oleh Baturin feared abducted by Russian invaders in Kherson oblast Mayor of Melitopol Ivan Fedorov abducted after refusing to collaborate with the Russian invaders Russian priest arrested and prosecuted for sermon opposing Russia’s war against Ukraine Russia effectively admits it deliberately bombed the maternity hospital in Mariupol that killed three patients, including a childRussia brings grotesque propaganda to Berdiansk after Ukrainian journalists refuse to collaborate Russian invaders murder Ukrainian volunteers Impassioned appeal from Ukrainian Muslim leader in face of Russia’s war to destroy Ukraine Russia is forcing Ukrainians from occupied Crimea and Donbas to fight in its invasion of Ukraine Children among the dead after Russian invaders opened fire on fleeing civilians Russia installs its propaganda TV after seizing Kherson and imposes 15-year sentences for reporting its invasion of UkraineUkrainian survivors of the Holocaust demand Putin and Russia get out of Ukraine Russia continues its carnage, flouting binding order from ECHR to stop bombing civilians in UkraineBabyn Yar bombed by Russia, 80 years after Nazi Massacre of Ukrainian Jews Russia proposes 15-year sentences and threatens "treason charges" for telling the truth about its war crimes in UkraineRussian schoolchildren told that Russia is bombing and killing Ukrainian children in ‘self-defence’ Putin miscalculated. Russia is fighting “an army of 40 million Ukrainians”
• Topics / War crimes 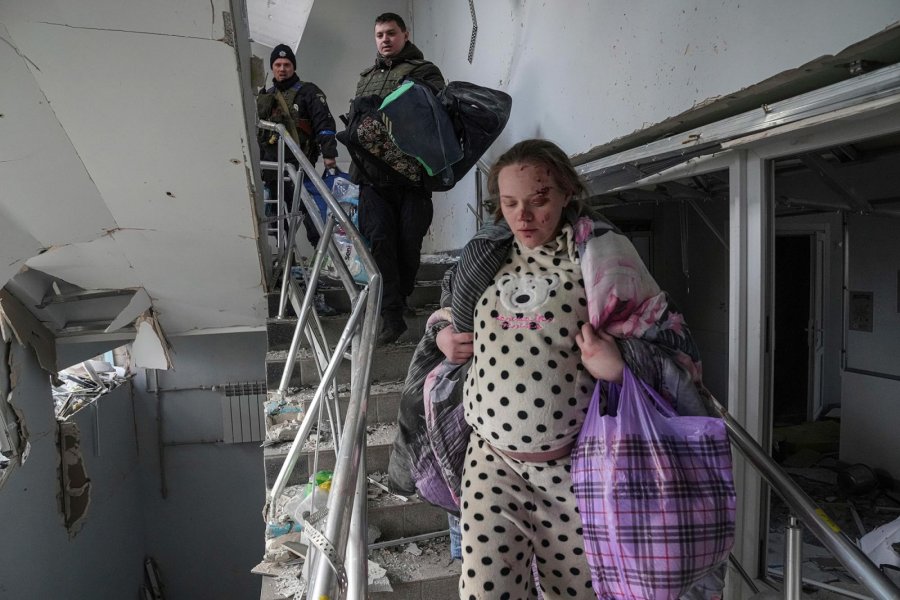 Mariupol Maternity Hospital immediately after Russia bombed it on 9 March. It effectively admitted to having deliberately targeted it, claiming, without any proof, that it was not being used as a hospital Photo Evgeniy Maloletka

Russia’s effective exclusion from the Council of Europe over its invasion of Ukraine will not mean that the gross violations of human rights it is currently committing will be outside the jurisdiction of the European Court of Human Rights [ECHR]. On 22 March, the Court published a resolution stating that Russia will cease to be a party to the European Convention on Human Rights from 16 September 2022. This means that Russia can be held to answer at ECHR for all violations of human rights committed before 16 September 2022, even if all the legal remedies which must first be tried have not been exhausted.

A decision was urgently required following the suspension on 25 February of the Russian Federation’s rights of representation in the Council of Europe, and Russia’s reaction by withdrawing from the Council of Europe on 15 March. In notifying of its withdrawal, Russia also informed of its intention to denounce the European Convention on Human Rights, thus inevitably leading to its rejection of the European Court of Human Rights’ jurisdiction. It was for this reason that the President of the Court suspended examination of all applications against Russia on 16 March.

The resolution passed on 22 March has lifted that suspension. Most critical, however, is the decision that “The Court remains competent to deal with applications directed against the Russian Federation in relation to acts or omissions capable of constituting a violation of the Convention provided that they occurred until 16 September 2022.”

Given that the moves which led to this situation were directly linked with Russia’s horrific war crimes and violations of human rights in Ukraine, it would have seemed immensely unjust if the Court had lost jurisdiction from only weeks after Russia’s invasion. Both individual Ukrainians, and the Ukrainian state, will now be able to apply to ECHR, with one of the advantages of this being that the Court can award significant amounts of compensation.

Russia is already flouting another, also binding, ruling from the UN’s International Court of Justice. On 16 March, ICJ ordered Russia to immediately suspend all military operations in Ukraine. Within hours, Moscow had bombed the Mariupol Drama Theatre in which hundreds of civilians were seeking shelter from its onslaught. That war crime was committed against a building where the word ‘Children’ was clearly marked in Russian for the bomber pilots to read

Until now, Russia seldom reacted to ECHR judgements by changing the legislation or practice found to violate human rights, but it did generally pay out the compensation which the Court awarded. It also usually (although by no means always) complied when the Court imposed interim measures under Rule 39. These measures have, for example, been used to ensure that Crimean Tatar and other Ukrainian political prisoners have received access to independent lawyers, thus preventing Russia from holding them incommunicado and torturing them. Russia has, up till now, refrained from forcibly deporting Sokhiba Burkhanova to Uzbekistan, after killing her husband Nazi Rakhimov in occupied Crimea, with this also thanks to ECHR intervention. The Court has since ordered Russia to refrain from dissolving the vital Memorial Human Rights Centre and International Memorial until their application is considered. The Memorial Human Rights Centre has been immensely important in documenting Russia’s violations and repression in occupied Crimea, and all Memorial bodies have been at the forefront of protest against Russia’s aggression against Ukraine.

It has to be noted that Russia has also flouted the ECHR’s order on 1 March that Russia cease any attacks on civilians and on civilian infrastructure, including kindergartens and hospitals, and it remains to be seen to what extent it will comply with any judgements in the future. It is still important that Ukraine and its citizens establish violations in the international courts.

ECHR does not move quickly and it was only on 14 January 2021 that the ECHR Grand Chamber found Ukraine’s complaints against Russia over violations in Crimea admissible and essentially determined that Russia had occupied Crimea since 27 February 2014. This was one of three inter-state cases, as well as over 7,000 individual applications, pending before the Court over events in Crimea, Eastern Ukraine and the Sea of Azov.

A judgement is also awaited from the Court with respect to the Case of Ukraine and the Netherlands v. Russia over the latter’s actions in Eastern Ukraine and over the downing by a Russian BUK missile of Malaysian airliner MH17 on 17 July 2014.