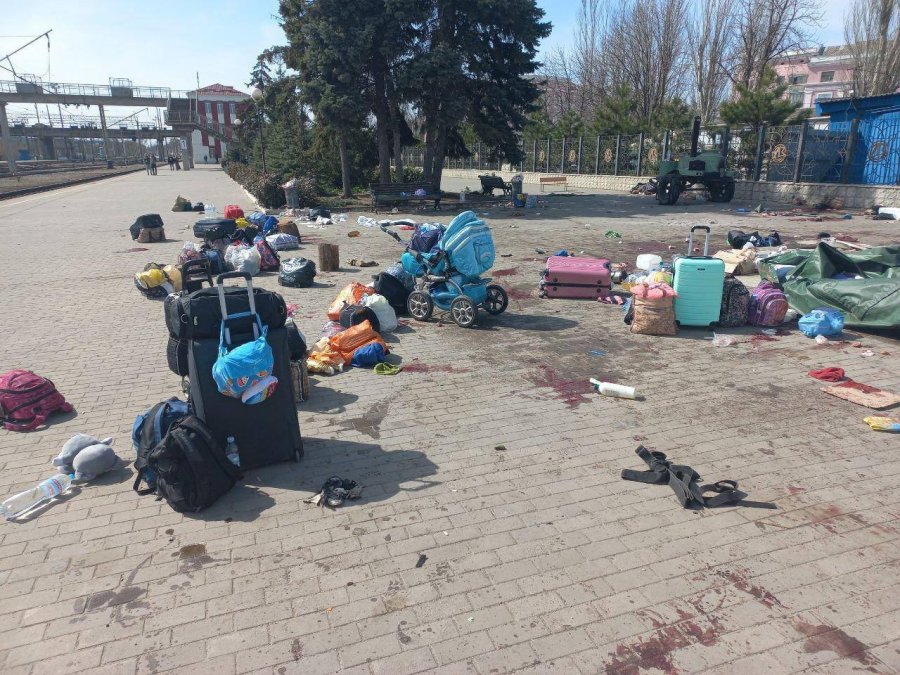 Kramatorsk Station after Russia bombed it as civilians were trying to escape Photo tweeted by Ukraine’s Foreign Minister, Dmytro Kuleba

The death toll now stands at 50, after Russia’s barbaric missile attack on the Kramatorsk Railway Station on Friday morning where as many as 4,000 civilians were trying to flee the city. 38 people were killed outright, and another 12 died of their injuries in hospital, with five children among the dead. 98 people are now in hospital, many with extremely serious injuries. The fact that two Tochka-U missiles were fired means that the Russians were well aware that they would be killing and maiming civilians, most of them women, children and the elderly.

Ukrainian Railways called this a deliberate attack on the railways’ passenger infrastructure and on Kramatorsk residents.  It reported over 30 deaths, with 100 injured, however the death toll seems certain to rise.  Gyunduz Mamedov, former head of Ukraine’s ‘War Department’, described the airstrike as “a deliberate war crime”.

The horrific attack on 8 April comes less than a day after another Russian airstrike bombed railway tracks near Barvenkove Station in the Donetsk oblast, damaging the only exit by which three evacuation trains were due to take civilians away from Sloviansk, Kramatorsk and Lyman.  All the passengers from the three evacuation trains had to wait for some time at the Barvenkove Station, however the railways were, late at night, able to fix the tracks and enable the trains to move on.

Sloviansk and Kramatorsk were the first cities in eastern Ukraine to be invaded by ‘former’ Russian FSB officer Igor Girkin and highly trained and Russian-armed fighters in April 2014.  Although the official narrative from Moscow was, and remains, that this was an uprising by local residents against the new government in Kyiv,  all key figures were Russians and Girkin has admitted that the men came from occupied Crimea via Russia.  He and other Russians involved in the creation of the so-called ‘Donetsk people’s republic’, such as Alexander Borodai and neo-Nazi Alexander Zhuchkovsky have openly acknowledged the pivotal role played by Moscow and “Russian forces”.   The cities were under Russian and Russian-controlled militant occupation until early July 2014.