Russia accused of using mobile crematoria to hide its war crimes in Mariupol At least 50 Ukrainians were burned to death in Russia’s bombing of Mariupol hospitals Russian FSB produce ‘refugee’ propaganda video blaming Ukrainian soldiers for Russia"s war crimes in Mariupol Russia continues bombing Mariupol while producing propaganda videos about its ‘humanitarian aid’Russia responds to International Court order to stop bombing Ukraine by destroying Mariupol Theatre sheltering familiesRussian invaders take Mariupol intensive care hospital and its patients hostage Mass graves of the Ukrainian civilians Russia claims it is not killingTerror and abductions as Russia tries to break Ukrainian resistance in Kherson and other occupied citiesUkrainian journalist Oleh Baturin feared abducted by Russian invaders in Kherson oblast Mayor of Melitopol Ivan Fedorov abducted after refusing to collaborate with the Russian invaders Russian priest arrested and prosecuted for sermon opposing Russia’s war against Ukraine Russia effectively admits it deliberately bombed the maternity hospital in Mariupol that killed three patients, including a childRussia brings grotesque propaganda to Berdiansk after Ukrainian journalists refuse to collaborate Russian invaders murder Ukrainian volunteers Impassioned appeal from Ukrainian Muslim leader in face of Russia’s war to destroy Ukraine Russia is forcing Ukrainians from occupied Crimea and Donbas to fight in its invasion of Ukraine Children among the dead after Russian invaders opened fire on fleeing civilians Russia installs its propaganda TV after seizing Kherson and imposes 15-year sentences for reporting its invasion of UkraineUkrainian survivors of the Holocaust demand Putin and Russia get out of Ukraine Russia continues its carnage, flouting binding order from ECHR to stop bombing civilians in Ukraine
• Topics / War crimes 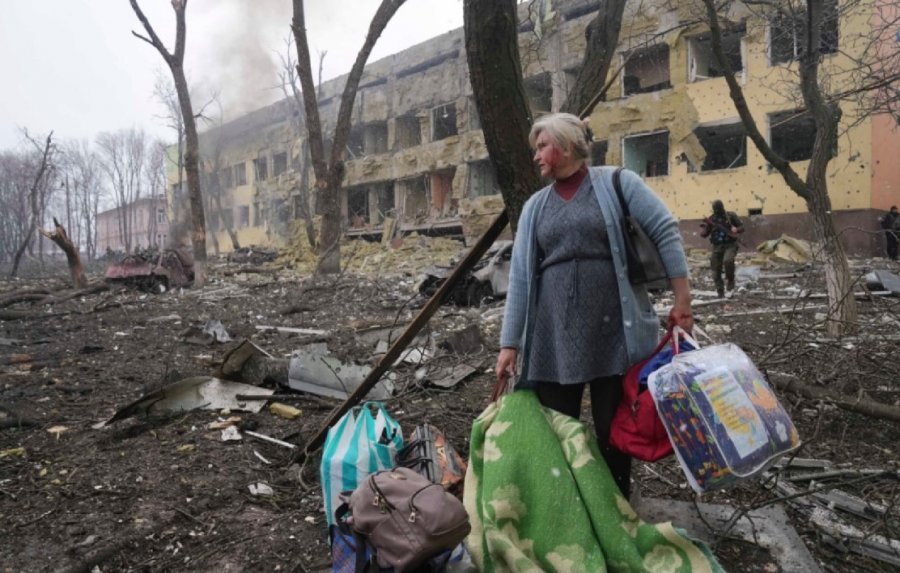 Mariupol residents taken to Russia have received ‘invitations’ to settle in the most inhospitable, far eastern parts of the Russian Federation. In publishing a copy of the leaflet, the Mariupol City Council noted that Russian leader Vladimir Putin’s “monstrous logic is clear.”  First they destroy a successful and warm city on the Sea of Azov, and then they drive its residents to Siberia or Sakhalin to work as cheap labour. “So how does this differ from Hitler’s policy?”, the Council asks and juxtaposes the leaflet from 2022 to an apparent equivalent to one from the Nazis’ occupation of Ukraine.

The 2022 leaflet is entitled “The Far East of Russia awaits you!”.  It does speak of ‘compatriots, resettling from abroad’, but since his first decrees in 2019, Putin has been fast-tracking illegal methods of obtaining ‘Russian citizens’.  Various figures are cited, for the apparent perks if people agree to move to the Far East. 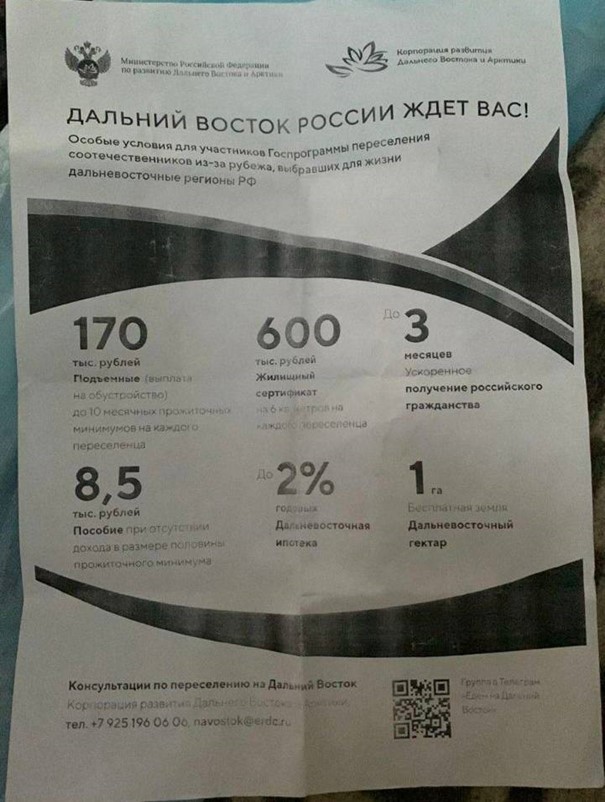 Even without the rouble currently plummeting as the result of sanctions, the offers would not, of themselves, be especially alluring.   There are, unfortunately, grounds for doubting that Ukrainians will be given the choice.

According to Mariupol Mayor Vadim Boichenko, 33.5 thousand Mariupol residents have been forcibly deported by the Russian invaders either to the Russian proxy ‘Donetsk people’s republic’ [‘DPR’] or to the Russian Federation. He explained that they had verified the names of these people with the list of residents of Mariupol, and were currently trying to rescue the Mariupol residents illegally taken to the enemy’s territory.  He added that the embassies of several European countries have become involved in trying to achieve this, and that “we are returning people to Ukraine via various countries”.

On 12 April, the Independent reported that Putin “is resettling Ukrainians 5,500 miles away in Siberia and far east Russia”.   The UK-based newspaper, which is owned by the son of a Russian oligarch (Alexander Lebedev) but has an independent editorial staff, asserted that Putin had issued an emergency order in March “to move 95,739 people” from Russia and Ukraine (including Donetsk and Luhansk) “from the war zones to be resettled as far as 5,500 miles away from their homes”.  The text states that they have seen the relevant document, but do not provide a copy of this.

“It included provisions to send 11,398 people to Siberia, 7,218 to the Far East and 7,023 to the North Caucasus, including other regions such as the heavily-militarised republics of Chechnya, Ingushetia and Dagestan.  Citing separate documents, the report added that people in the port city of Mariupol were being asked to sign papers that claimed Ukrainian troops shelled their city. The signatories were reportedly told they cannot return to Ukraine because they will face “persecution”.

If this decree exists, it does not appear to be on open access, and so the report cannot be verified.  The assertion that Mariupol residents are being forced into signing documents claiming that Ukrainian troops are behind the horrific shelling (and bombing) of the city does, however, fit with other propaganda efforts which Russia has been making to blame Ukraine for its crimes against the civilian population.

As reported, on 23 March, RIA Novosti, and other state-controlled Russian media broadcast a video in which a young Ukrainian from Mariupol, Lyubov Ustinova repeated the Kremlin’s narrative about the Ukrainian Azov soldiers defending Mariupol, including the claim that Ukrainian soldiers were behind the bombing of the maternity hospital in Mariupol on 9 March.  The Russian independent MediaZona was able to demonstrate that the relevant video had been produced by Russia’s Security Service, or FSB, with state media sent the videos and instructed not to divulge their source.

A little later, Associated Press, whose photographer had been present at the site of the Russian bombing, reported that Russia had now changed its story.  At the time of the bombing, Russian officials claimed that the heavily pregnant Ukrainian beauty blogger photographed leaving the devastated building was “a crisis actor”.  Now, a video had been posted with the same woman “Marianna Vishegirskaya, in which the new mother says the hospital was not hit by an airstrike last month and that she told AP journalists she did not want to be filmed — assertions that are directly contradicted by AP reporting.”

We know from Lyubov Ustinova’s sister, Anastasia, that the Russians claimed to believe that Lyubov was a ‘saboteur’.  Judging by the behaviour of the FSB in occupied Crimea, it seems extremely likely that she was threatened with imprisonment if she did not provide the video demanded.  There is no way of proving at present that the young woman first seen as a victim of the bombing of the maternity hospital was not put under similar pressure, but there is sufficient video, photographic and witness testimony of the bombing to make it difficult to find any other explanation.  It is reported that all of the hospital staff and most likely the patients from all but one hospital forced to treat Russian soldiers, have been illegally taken to Russia, where such pressure can easily be brought to bear.

Russia is continuing to cause a horrific humanitarian disaster in Mariupol which has been without electricity and running water for over a month and is running critically low on food and medication. The Donetsk Oblast Governor Pavlo Kyrylenko reported on 12 April that over the past two days, the Russians had prevented any civilians from leaving the city.  Prior to that, it has essentially blocked any significant coach evacuations, and is clearly preventing the International Committee for the Red Cross and other international bodies from witnessing what it has done to Mariupol.  Under such circumstances, it is difficult, if not impossible, to investigate the alleged use by Russia of a chemical poison against Ukrainian Azov soldiers on 11 April.

On 12 April, in itemizing the horrific scale of the devastation that Russia has inflicted on residential buildings and other infrastructure in Mariupol, Mayor Boichenko referred bitterly to what Putin has euphemistically claimed is not an invasion, but a  ‘special military operation’.

“The only special operation which putin [sic] has successfully carried out is a special operation on destroying Mariupol and killing its civilian population. Fascist Germany in 1941 seemed unconquerable, but it was finally punished. The war criminals rotten in prisoners or were killed. For decades the Germans paid reparations. The same will happen with russia. They will pay for everything.”