Over 60 places of worship in Ukraine, as well as sites of cultural heritage, have been attacked by the Russian invaders, with some totally destroyedRussian invaders kill 96-year-old Ukrainian Holocaust survivor Odesa Christian, Jewish and Muslim faiths unite for Ukraine and against Russian aggression Five members of a family and people queuing for bread killed by Russian bombing of Chernihiv Russia responds to International Court order to stop bombing Ukraine by destroying Mariupol Theatre sheltering familiesRussian invaders take Mariupol intensive care hospital and its patients hostage Mass graves of the Ukrainian civilians Russia claims it is not killingTerror and abductions as Russia tries to break Ukrainian resistance in Kherson and other occupied citiesUkrainian journalist Oleh Baturin feared abducted by Russian invaders in Kherson oblast Mayor of Melitopol Ivan Fedorov abducted after refusing to collaborate with the Russian invaders Russian priest arrested and prosecuted for sermon opposing Russia’s war against Ukraine Russia effectively admits it deliberately bombed the maternity hospital in Mariupol that killed three patients, including a childRussia brings grotesque propaganda to Berdiansk after Ukrainian journalists refuse to collaborate Russian invaders murder Ukrainian volunteers Impassioned appeal from Ukrainian Muslim leader in face of Russia’s war to destroy Ukraine Russia is forcing Ukrainians from occupied Crimea and Donbas to fight in its invasion of Ukraine Children among the dead after Russian invaders opened fire on fleeing civilians Russia installs its propaganda TV after seizing Kherson and imposes 15-year sentences for reporting its invasion of UkraineUkrainian survivors of the Holocaust demand Putin and Russia get out of Ukraine Russia continues its carnage, flouting binding order from ECHR to stop bombing civilians in Ukraine
• Topics / War crimes 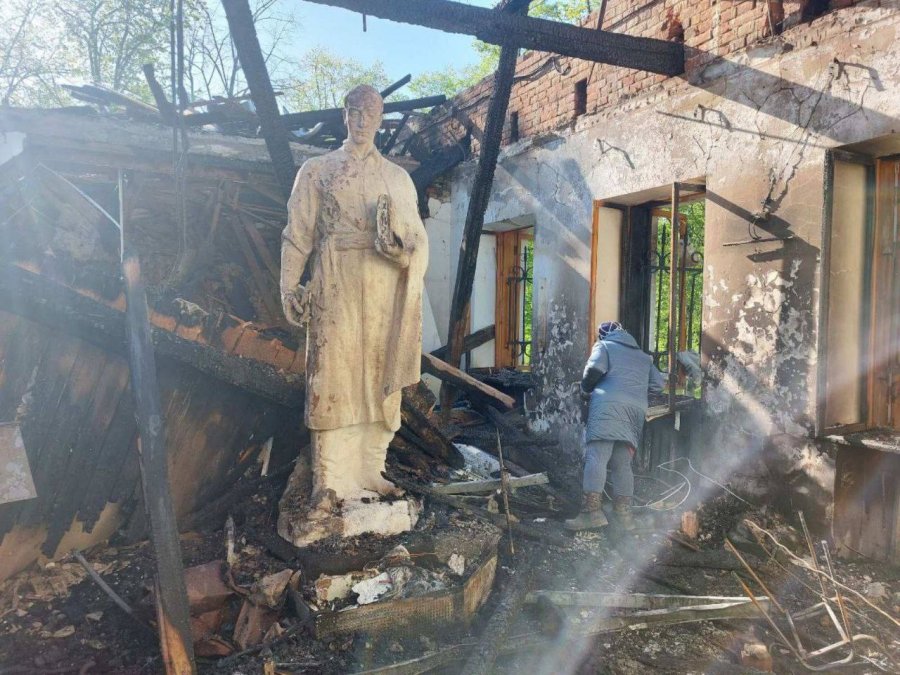 Ukraine’s National Hryhoriy Skovoroda Museum was destroyed late in the evening of 6 May by a Russian missile strike to the roof and the ensuing fire, with the Museum director’s 35-year-old son, who was guarding the building, injured in the attack.  As of 7 May, the Russian invaders had damaged or destroyed almost 200 sites of Ukraine’s cultural heritage, as well as killing a huge number of civilians, often through notoriously inaccurate artillery fire from multiple missile launchers.

While the attack on the Skovoroda Museum may also reflect only the invaders’ barbaric disregard for whom and what they destroy, Ukraine’s Minister of Culture Oleksandr Tkachenko is unconvinced.   He believes that the Russians deliberately aimed at the museum, the building in which the great Ukrainian philosopher spent his last years, and has called this an ideological act.  Tkachenko points out that the museum, in the village of Skovorodynivka (Kharkiv oblast) is far from any other inhabited locations or infrastructure, and is effectively surrounded by fields.

The Museum was due for restoration work in advance of events marking three hundred years since the birth of Hryhoriy (or Gregory) Skovoroda on 3 December 1722.   The philosopher, mystic, poet and educationalist was born of Ukrainian Cossack roots, studied and spent most of his life in Ukraine, and is buried not far from the museum which will now need to be totally reconstructed.  As Tkachenko points out,  Russia has often treated Skovoroda as “the first Russian philosopher”, so all these Ukrainian links are, undoubtedly, an irritation.  The Russian Wikipedia entry is notable for the number of times it mentions ‘the Russian empire’ and avoids speaking of Ukraine.

Tkachenko has said that Ukrainian and international specialists will be recording this new Russian crime against Ukraine’s cultural heritage and sending the relevant documents to both UNESCO and to the international community.  The attack on the National Skovoroda Museum is, he adds, a strike against what Russian leader Vladimir Putin is fighting, namely Ukrainian identity.  He recalls Skovoroda’s words that he “could not remain without freedom” and calls Russia’s attack “a strike against our freedom, the freedom of self-determination, the freedom against which the Russian forces are fighting.

Fortunately, Russia did not succeed in destroying the exhibits in the Skovoroda Museum.  Since its total invasion began on 24 February, Russia has already destroyed or plundered other sites of cultural heritage, and the exhibits had been removed as a precaution.

Over the last months, many in the West have expressed indignation when Russian cultural events were cancelled in response to Russia’s aggression against Ukraine.  The argument is that cultural figures and works are apolitical and should not be targeted.  Nor, however, should the final home and museum of a great Ukrainian philosopher and countless other sites of Ukrainian cultural heritage.