Russian invaders kill 96-year-old Ukrainian Holocaust survivor Odesa Christian, Jewish and Muslim faiths unite for Ukraine and against Russian aggression Five members of a family and people queuing for bread killed by Russian bombing of Chernihiv Russia responds to International Court order to stop bombing Ukraine by destroying Mariupol Theatre sheltering familiesRussian invaders take Mariupol intensive care hospital and its patients hostage Mass graves of the Ukrainian civilians Russia claims it is not killingTerror and abductions as Russia tries to break Ukrainian resistance in Kherson and other occupied citiesUkrainian journalist Oleh Baturin feared abducted by Russian invaders in Kherson oblast Mayor of Melitopol Ivan Fedorov abducted after refusing to collaborate with the Russian invaders Russian priest arrested and prosecuted for sermon opposing Russia’s war against Ukraine Russia effectively admits it deliberately bombed the maternity hospital in Mariupol that killed three patients, including a childRussia brings grotesque propaganda to Berdiansk after Ukrainian journalists refuse to collaborate Russian invaders murder Ukrainian volunteers Impassioned appeal from Ukrainian Muslim leader in face of Russia’s war to destroy Ukraine Russia is forcing Ukrainians from occupied Crimea and Donbas to fight in its invasion of Ukraine Children among the dead after Russian invaders opened fire on fleeing civilians Russia installs its propaganda TV after seizing Kherson and imposes 15-year sentences for reporting its invasion of UkraineUkrainian survivors of the Holocaust demand Putin and Russia get out of Ukraine Russia continues its carnage, flouting binding order from ECHR to stop bombing civilians in UkraineBabyn Yar bombed by Russia, 80 years after Nazi Massacre of Ukrainian Jews
• Topics / War crimes

Over 60 places of worship in Ukraine, as well as sites of cultural heritage, have been attacked by the Russian invaders, with some totally destroyed 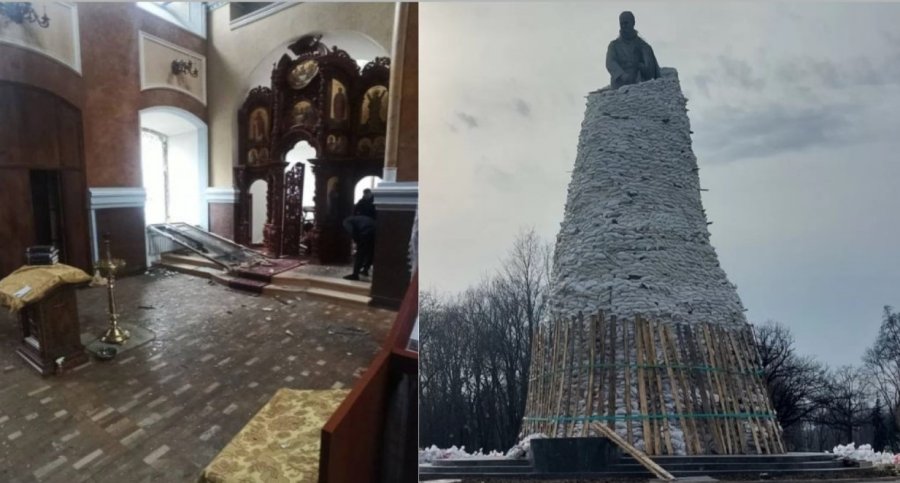 Five weeks into its war against Ukraine, Russia has bombed or shelled over sixty places of worship in at least eight oblasts (Kyiv; Donetsk; Luhansk; Kharkiv; Sumy; Zaporizhya and Zhytomyr).  It has also destroyed or damaged many places of huge cultural significance.

It is for this reason that, instead of running for cover to escape Russia’s relentless bombing and shelling of the city, Kharkiv municipal workers and volunteers worked together to protect the famous Monument to the great Ukrainian poet Taras Shevchenko by totally covering with sandbags.  There have been similar moves in Odesa, Lviv and other Ukrainian cities, but nowhere as dangerous as in Kharkiv which Russia has been unable to seize, and instead seems bent on destroying.

The very tall monument is a landmark of the city, which withstood the Nazis, but was in grave danger from the new invading force from the North.  Work is also underway to protect the monument to Ukraine’s Independence on Constitution Square and Kharkiv Mayor Ihor Terekhov has promised that they will endeavour to protect other monuments as well. 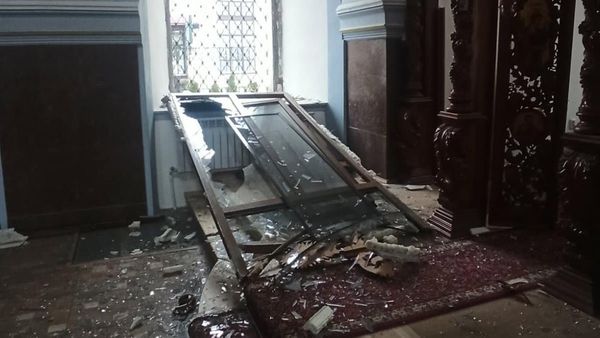 Holy Dormition Cathedral, 1778 in the Kharkiv oblast damaged by Russian shelling on 3 March

The Russian regime under Vladimir Putin has long demonstrated barbaric disregard for human life, as well as for places of religious and cultural significance.  There may, however, be other more sinister motives for the horrific destruction to sites of cultural importance that Russia has caused since it began its invasion of Ukraine on 24 February. The Russian regime does not recognize Ukraine’s right to exist, and may well want to destroy the country’s rich historical and cultural legacy, especially since this demonstrates roots that go back far beyond the emergence of Moscow.  Russian politicians and the state media have made almost childish attempts to try to appropriate the ancient monument of Chersonese in occupied Crimea as ‘Russian’, while also inflicting considerable damage on it, the 16th Century Khan’s Palace (Hansaray) and other places of significance in Crimea.  Ukrainians’ valiant residence to the Russian invaders has spoiled Russia’s narrative, and it is quite possible that the blanket destruction to Mariupol and Kharkiv is, at least in part, prompted by the wish for revenge.

Some of the losses are irretrievable.  Enormous damage was caused to a museum in Ivankiv, Kyiv oblast, with some of the works of Ukrainian artist Maria Prymachenko totally destroyed. In Mariupol alone, Russian strikes destroyed the Drama Theatre and a School of Arts, with both these having also been used to provide residents with shelter from the incessant bombing.

While Moscow may well be hoping, through such destruction, to undermine Ukraine’s separate identity, the horrific vandalism also gives the lie to all of the excuses that the Kremlin has presented for its war against Ukraine.  The claims that it is defending the Russian-speaking population and the Orthodox Church are grotesque in the light of the systematic destruction of the predominantly Russian-speaking cities of Kharkiv and Mariupol, and the huge amount of damage caused to churches, including those which are, at least for the moment, still linked with the Moscow Patriarchate.

The claim that the war is aimed at the so-called ‘denazification’ of Ukraine has been condemned by Holocaust survivors, the Chief Rabbi of Ukraine and international Holocaust remembrance organizations.  It seems particularly cynical given that it is Russians who bombed Babyn Yar, site of one of the worst Nazi massacres of Jews; another Holocaust memorial in the Kharkiv oblast and who killed Boris Romantschenko, a 96-year-old Kharkiv resident who had survived four Nazi concentration camps, only to die from a Russian missile.

Ukraine’s Ministry of Culture and Information Policy has created a special website for documenting war crimes committed by the Russian armed forces against the Ukrainian population and sites of cultural heritage.   The material  will, hopefully, be used as evidence for criminal prosecution, either under Ukrainian legislation or at the International Criminal Court at the Hague.  They invite people to send them information and / or photographic and video evidence regarding the damage of protected buildings; monuments; places of worship, etc, the plundering of museums, libraries and similar and the use of force by the armed forces during the above acts of plunder or destruction.   The considerable evidence already amassed can be viewed here in Ukrainian and in English (most easily viewed in ‘Gallery’).