Odesa Christian, Jewish and Muslim faiths unite for Ukraine and against Russian aggression Five members of a family and people queuing for bread killed by Russian bombing of Chernihiv Russia responds to International Court order to stop bombing Ukraine by destroying Mariupol Theatre sheltering familiesRussian invaders take Mariupol intensive care hospital and its patients hostage Mass graves of the Ukrainian civilians Russia claims it is not killingTerror and abductions as Russia tries to break Ukrainian resistance in Kherson and other occupied citiesUkrainian journalist Oleh Baturin feared abducted by Russian invaders in Kherson oblast Mayor of Melitopol Ivan Fedorov abducted after refusing to collaborate with the Russian invaders Russian priest arrested and prosecuted for sermon opposing Russia’s war against Ukraine Russia effectively admits it deliberately bombed the maternity hospital in Mariupol that killed three patients, including a childRussia brings grotesque propaganda to Berdiansk after Ukrainian journalists refuse to collaborate Russian invaders murder Ukrainian volunteers Impassioned appeal from Ukrainian Muslim leader in face of Russia’s war to destroy Ukraine Russia is forcing Ukrainians from occupied Crimea and Donbas to fight in its invasion of Ukraine Children among the dead after Russian invaders opened fire on fleeing civilians Russia installs its propaganda TV after seizing Kherson and imposes 15-year sentences for reporting its invasion of UkraineUkrainian survivors of the Holocaust demand Putin and Russia get out of Ukraine Russia continues its carnage, flouting binding order from ECHR to stop bombing civilians in UkraineBabyn Yar bombed by Russia, 80 years after Nazi Massacre of Ukrainian Jews Russia proposes 15-year sentences and threatens "treason charges" for telling the truth about its war crimes in Ukraine
• Topics / War crimes 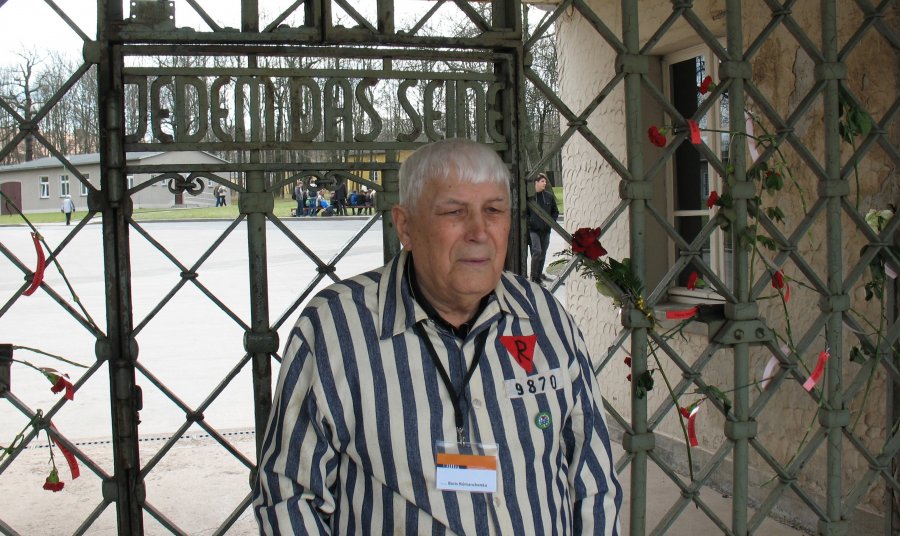 Boris Romantschenko (or Romanchenko) was killed on 18 March, when Russians bombed his apartment block in Kharkiv.  He was 96 year old and had survived four Nazi concentration camps (Buchenwald; Peenemünde; Dora and BergenBelsen), but was killed by Russian invaders whose leaders are claiming that their aim is “the demilitarization and denazification of Ukraine”.   According to his granddaughter, Mr Romantschenko had difficulty walking and had refused to leave Kharkiv, even though the Northern Saltivka district where he lived has been particularly savagely bombed.  The missile hit his apartment, which was totally gutted.

Boris Romantschenko was born in 1926 in the Sumy oblast of Kharkiv, and was first seized by the Nazis and taken for forced labour to Germany in 1942. After an unsuccessful attempt to escape, he was sent to the Buchenwald concentration camp, and was later also held at the other camps.

After the Second World War, he was active in Holocaust remembrance work, and was the Vice President for Ukraine of the International Buchenwald-Dora Committee.  In 2012, on the 67th anniversary of the liberation of Buchenwald, it was Boris Romantschenko who read out the pledge which survivors had made “to create a new world where peace and freedom reign.”

In reporting Boris Romantschenko’s death at the hands of the Russians, the Buchenwald and Mittelbau-Dora Memorial Foundation expressed concern also about the safety of other Holocaust survivors in Ukraine.  There is every reason for such concern as Moscow, while constantly denying that it is targeting civilians, has been systematically bombing apartment blocks, hospitals; schools and other clear civilian sites, especially in Kharkiv; Mariupol and Kyiv.  Having been unable to seize the cities, due to huge resistance from the Ukrainian Army and Territorial Defence, Russia is resorting to massive bombing and shelling.  The Mayor of Kharkiv, Ihor Terekhov reported on 21 March that 972 buildings have been devastated in Kharkiv since Russia’s invasion on 24 February, with 778 of these residential buildings.  Since Russia has been bombing and shelling the Kharkiv oblast in general, including with cassette bombs, the full figures, both in numbers of buildings hit and in the death toll, are likely to be much higher.

The situation in Mariupol has been described as apocalyptic, with up to 300 thousand Ukrainians prevented by the Russian invaders from leaving, and deprived of heating, electricity and water.  Simply venturing out into the street to try to find water or food is perilous, and Russia has bombed both a theatre and an art school although it was known that these were being used by civilians as bomb shelters.  The bombing is also intensifying in Kyiv, where Russia has already shelled Babyn Yar, the site of one of the worst Nazi massacres of the Holocaust.

The elderly are among those probably most at risk as many have health reasons restricting their mobility.  If they are alone, they may well not hear the syrens, or may be too frightened to leave their apartments.

The Russian invaders are attacking Ukraine and Ukrainians and they really do not care how many civilians are killed.  All of this makes Putin’s lies about Russia’s aim being “the demilitarization and denazification” of Ukraine so shockingly cynical. 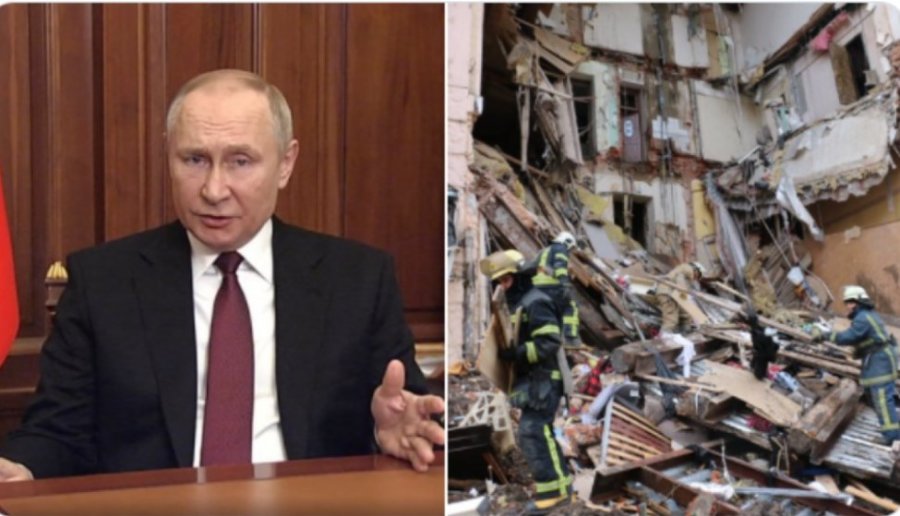 Putin declaring war on Ukraine, Ukrainian rescuers amid the devastation in Kharkiv caused by Russian missiles

On 28 February, members of the international remembrance committees of Auschwitz, Buchenwald-Dora, Dachau and other Nazi concentration and death camps, issued an appeal, demanding an end to the war.  They condemned Moscow’s cynical abuse of Shoah and the memory of its victims in its propaganda.

Odesa Christian, Jewish and Muslim faiths unite for Ukraine and against Russian aggression