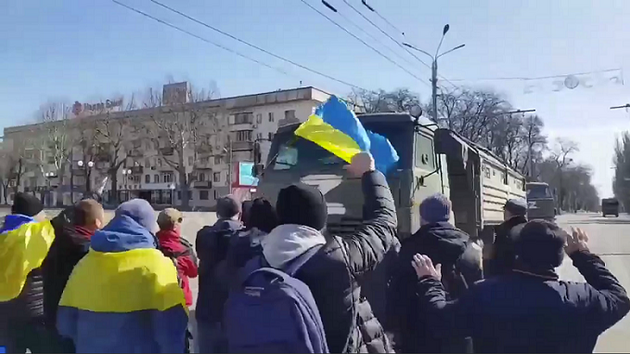 Kherson during a peaceful protest against Russian occupation on 21 March before the Russians began shooting and otherwise violently dispersing the crowd. Screenshot from a video posted by Information Resistance

Russia’s state-controlled RIA Novosti published a headline on 11 May, claiming that ‘The Kherson regional authorities will ask Putin to include their region into Russia’.  The so-called ‘authorities’ are, in fact, a very small number of collaborators whom the Russian invaders have installed, after their abductions and other terror tactics failed to force the democratically elected representatives in Kherson and the oblast to capitulate.

RIA Novosti calls Kyrylo Stremousov the ‘deputy head of the regional military-civic administration’ without mentioning that he is recognized as such only by the Russian invaders and fellow collaborators.  Stremousov is quoted as claiming that “the city of Kherson is Russia” and that there will be no referendums about the creation of a so-called ‘Kherson people’s republic’.  “This will be a single decree on the basis of an appeal from the leadership of the Kherson oblast to the president of the Russian Federation and will be a request” to supposedly join the oblast to Russia.

Stremousov is a Russian-installed puppet, so presumably at least the annexation part is what the Kremlin is considering.  RIA Novosti then quotes Putin’s press secretary Dmitry Peskov as claiming that such a decision must be taken by the oblast’s residents.  These are the same residents it should be noted as those whom the Russian military have repeatedly and violently dispersed as they tried to hold peaceful protests against Russian occupation.   Peskov’s verbiage made no mention of such demonstrations, nor how they would ascertain the views of “residents of the Kherson oblast” if the latter are not allowed to peacefully gather, and if their democratically elected representatives are being overridden.  He does, however, end by claiming that any such move must “be absolutely legitimate, as it was with Crimea”.

Russia’ invasion of Crimea and the pseudo referendum used as the excuse for annexing Ukrainian territory were in flagrant violation of Ukraine’s Constitution and were condemned by all democratic countries.  Russia did not suffer sufficient sanctions then, however, and has since rewritten the history books, at least in Russia and Russian-occupied parts of Ukraine.  According to the white-washed version, ‘the Crimeans’ decided that they wanted to separate from Ukraine and organized a ‘referendum’.  Where the Russian forces without insignia that invaded Crimea on 27 February are mentioned, they are claimed to have merely ‘ensured order’ during this alleged ‘referendum’.  Most often, they are not referred to at all.

It is unclear whether the Kremlin is assuming that the same can be achieved in the parts of Ukraine that the Russian invaders have seized since 24 February 2022, or has simply dropped any pretence.  It has certainly not changed the format, with such ‘appeals’ either used, or planned, since 2014.

What was clear much earlier, and openly articulated on 6 May by Andrei Turchak, a top official in the ruling United Russia party, is that Russia “has come to the Kherson oblast for good”.  While Turchak also claimed that the residents of the oblast would determine its status, this clearly referred only to whether collaborators like Stremousov advocated for a ‘people’s republic’ or for annexation, no more.  There would be “no return to the past”, Turchak claimed, adding that they would “live together and develop this rich oblast” which Russia has been bombing, shelling and otherwise devastating, as it has huge areas of Ukraine.

It was clear from when Russian forces first seized Kherson that Russia planned to stay and would need to be driven out.  It has, in fact, long been feared that Russia would resort to military means, having failed otherwise to compensate for the loss of Ukrainian water to occupied Crimea.  Russian forces seized the Kakhovka Hydroelectric Station on 24 February with at least one of its aims being to gain access to water from the Dnipro river.

Russia has not succeeded in crushing resistance from local residents and, as mentioned, could not force the democratic leadership to collaborate.  On 26 April, the Russian invaders therefore held a ‘meeting’ in the Russian-seized Kherson City Council building.  During this meeting, the invaders presented the people they claimed to be the new ‘head of the Kherson regional administration’ Volodymyr Saldo, and the ‘head of the Kherson city administration’, Oleksandr Kobets.  If Saldo was a former Mayor of Kherson and then an MP from Yanukovych’s ‘Party of the Regions’ party, virtually nothing appears to be known of Kobets, aside from his willingness to commit state treason.

Kyrylo Stremousov is a Kherson blogger, who has been actively supporting the Russians since the beginning of the full invasion. Ukraine’s Institute for Mass Information reported on 4 March that Stremousov, had been threatening independent journalists and ‘dissidents’ with Russian imprisonment.  He had warned  journalists, activists and patriots who are against the so-called ‘Russian world’ doctrine that they wouldl face purges and prison.  In his video, Stremousov referred to the Russian draconian new law envisaging sentences of up to fifteen years for what were claimed to be ‘fakes’ and ‘discreditation’ of the Russian army.  By 28 April, Russia was calling Stremousov not only the head of the so-called ‘For peace and order committee for the rescue of the Kherson oblast', but also the ‘deputy head of the military-civic administration of the Kherson oblast’.  On that day, Stremousov announced that the Kherson oblast would be a ‘rouble zone’ from 1 May.  Russia has also cut off Ukrainian media, replacing it with propaganda channels.