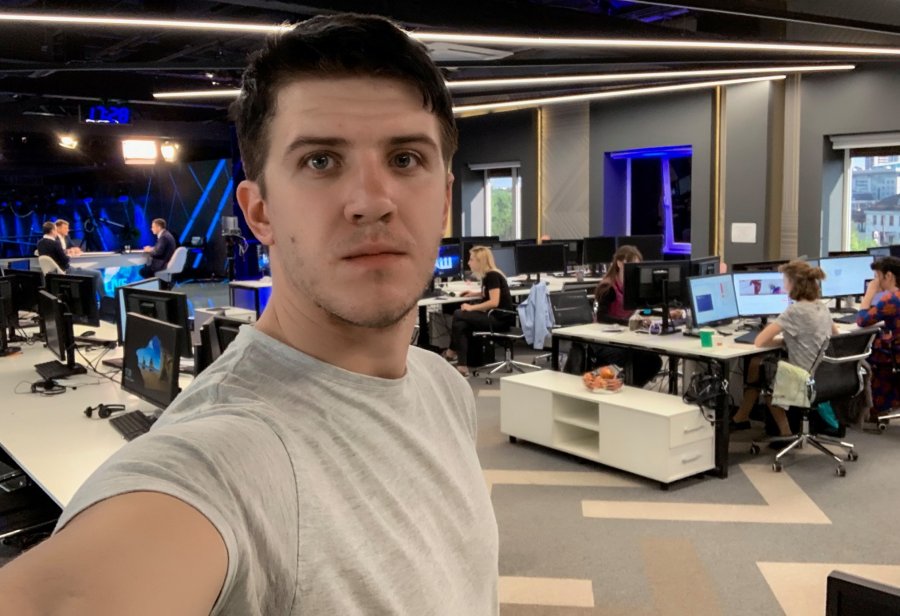 There has been no contact with Kherson journalist and Chief Editor of Kherson NewsCity, Kostiantyn Ryzhenko since 30 March and there is every reason to believe he is in danger because of his courage in reporting Kherson resistance to the Russian invasion. It is unclear whether he has been seized by Russian soldiers,  or is in hiding because the latter were actively looking for him. Armed Russians have since also turned up at his family’s home and taken his 25-year-old brother Zakhar away.

The news that Ryzhenko was missing effectively came from the journalist and civic activist himself. He had left a message on his Telegram page which begins with the words: “Hi, if you’re reading this text, it means that something has happened.”  This is a scheduled text which he keeps postponing, and the fact that he has been unable to do so is a sign of trouble.  His message stresses that the lack of contact does not  necessarily mean that he has been seized.  He could have lost contact, or have destroyed his phone so that it did not get into the hands of the enemy. He adds that he has ensured that the latter, i.e. the Russian invaders, will not be able to learn about his contacts and correspondence as he has secured his accounts against such attempts.  The rest of his message assures people that the voluntary organization providing food, medicines, etc. will continue their work.

Ukraine’s National Union of Journalists has spoken with Konstiantyn’s father, Oleksandr Ryzhenko about the Russians’ armed raid.  He explained that the Russians were looking for Kostiantyn because of his journalist work and that two or three carloads of men with machine guns had appeared at their home on 31 March.  They had searched the flat and taken Zakhar’s telephones and other technology away.  They had freed Oleksandr “on condition that I got in touch with my son, Kostiantyn.  They warned that the first visit would be restrained, but that the next time the military would speak roughly.”

It seems that the invaders objected to Zakhar’s use of the Signal encrypted messenger and decided to take him away “to get to the bottom of it”.  That, however, was on Thursday, and a day later there is nothing to suggest that Zakhar has been released.

The Russians claimed that many people had died because of Ryzhenko.  They effectively confirmed that this assertion was linked with his journalism by asking whether he had published his material for money, or because of “nationalist views”. Very tellingly, they added that they would swiftly find a common language with him if his materials had been “for money”.

Ryzhenko’s friend Serhiy Chernyavsky has told the Committee to Protect Journalists that Ryzhenko had probably been targeted because he had streamed and recorded the daily demonstrations by Kherson residents against the Russian invaders. “He was also cited as a source on the situation in Kherson by news outlets including the BBC and the Latvia-based outlet Meduza.”

Since the only bloodshed has been when the Russians opened fire and injured peaceful demonstrators, it is certainly strange to accuse Ryzhenko of having blood on his hands.  It seems much more likely that Moscow is aggrieved that all the courageous anti-Russian demonstrations are contradicting the Kremlin’s narrative and thwarting the attempts to stage yet another pseudo referendum and fake ‘Kherson people’s republic’.

Ryzhenko is one of three journalists who have disappeared since the beginning of Russia’s invasion. Well-known photojournalist Max Levin was last seen working in parts of the Kyiv oblast that were under Russian attack on 13 March.  Zaporizhzhia journalist Iryna Dubchenko is known to have been seized by the invaders who said that they were taking her “for trial” to occupied Donetsk (details here).  According to the Head of the Zaporizhzhia Regional Military Administration, Oleksandr Starukh, a centre has been created to secure the release, through an exchange of prisoners, of Dubchenko, as well as the other journalists; city mayors and civic activists whom the Russians are believed (or known) to be holding.  Starukh stressed that it is vital that everybody knows about such forced disappearances since that can protects each victim’s life.