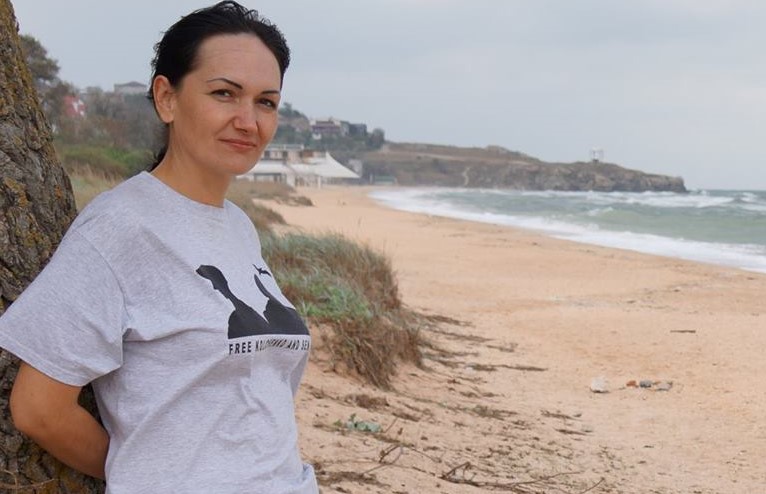 For twelve days, Iryna Danilovych’s parents went through hell, not knowing what had happened to their daughter, since the enforcement bodies in Russian-occupied Crimea who had detained her were denying any knowledge of her whereabouts.  It was only on 11 May that she was ‘found’ in the Simferopol SIZO [remand prison].  Her lawyer, Aider Azamatov, has now been able to provide more details, with these suggesting that Russia is once again fabricating criminal charges against a journalist and using torture to obtain ‘evidence’.

As reported, Danilovych was detained in the early morning of 29 April at a bus stop as she was heading home from her work in Koktebel to her home in the village of Vladyslavivka, near Feodosia.  A search was carried out that morning at the home she shares with her parents, so there were grounds for believing that she had been detained, rather than abducted.  The distinction becomes blurred, however, given that she simply disappeared for 12 days, despite Azamatov searching for her in all possible places of detention.

Azamatov has now learned that she was held for eight days in the premises of the Russian FSB [security service] in occupied Crimea. She was forced to undergo a so-called lie detector test, with the FSB threatening that she “would be taken to the forest” if she concealed anything.  Over the entire period, she was only given anything to eat once a day.

At the end of this 8-day period, the FSB forced her to sign blank pieces of power, in exchange – they claimed – for her freedom.  Such pages will then, almost certainly, be turned into supposed ‘confessions’ to whatever charges the FSB decide to bring, and were obtained only through illegally holding Iryna prisoner, without access to her lawyer, and placing her under, at the very least, psychological duress.

In fact, they were also the result of brazen deceit.  Instead of releasing her, the FSB claimed that 200 grams of explosives had been ‘found’ in her handbag.  She was taken to the Russian-controlled court in Simferopol and remanded in custody, with the detention order only issued on 8 May, nine days after her disappearance.. It appears that an FSB-appointed ‘lawyer’ was involved, essentially for the paperwork, and entirely illegally since Azamatov, the lawyer of Danilovych’s choice, was available, and was receiving only lies when he tried to find her.

There is every reason to view these charges with scepticism.  The officers who carried out a search of Danilovych’s home on 29 April refused to leave a copy of the search warrant, but did have one, with this evidently preceding the alleged ‘finding’ of explosives.  Iryna’s father recalled that it said something about his daughter being accused of passing on ‘non-confidential information to an NGO’. The FSB officers told him that she was being arrested for ten days, although there is clearly no court order for this.

The fact that she was held incommunicado for 12 days suggests that the FSB were using illegal means of duress and needed to keep her hidden from her lawyer.

Danilovych is a nurse who had also become active as a civic journalist reporting on medical issues in occupied Crimea. It seems clear that she antagonized the occupation authorities by heading the Crimean branch of the Alliance of Doctors, a Russian (and Crimean) trade union and by her involvement in attempts to obtain the supplementary payments promised to medical workers at the beginning of the pandemic and to highlight the lies told about the number of casualties, etc. Despite the danger under Russian occupation, Danilovych spoke openly about the situation in her hospital in Feodosia.  She explained in an interview to Crimean Realities that the situation with covid was much worse than the official statistics admitted. She had every reason to know as her own father was infected with covid while in hospital after a heart operation.  The Ukrainian human rights NGOs who issued a statement on Danilovych’s disappearance reported also that the civic journalist had circulated information about the war Russian is waging against Ukraine, and that her earlier involvement in the trade union movement had led to her dismissal from her previous job and to threats of legal action.

Russia has made it extremely dangerous to engage in formal or civic journalist activities in occupied Crimea.  Eleven Crimean Tatar civic journalists, including Nariman Dzhelyal, Remzi Bekirov and Server Mustafayev, are either serving or facing huge sentences on absurd charges which are very clearly linked to their work in following and reporting on repression and other rights violations under Russian occupation.

The circumstances around Danilovych’s disappearance and arrest all look ominously like a remake of the FSB’s arrest in March 2021 of Vladyslav Yesypenko, a freelance Ukrainian journalist.  He was seized by the FSB while in occupied Crimea, carrying out journalist work for RFE/RL’s Crimean Realities.  There too, the FSB claimed to have ‘found’ a grenade in his car and took him away, holding him without access to independent lawyers for almost a month.  Once he was finally able to see a real lawyer, Yesypenko retracted the ‘confessions’ he signed and described in detail the torture, including electric shocks, threats of execution and beatings, used to obtain them.

The grenade that the FSB claimed to have found in Yesypenko’s car did not have his fingerprints on it, and did not actually fit in the compartment it was supposed to have been in.  All of this, together with numerous other glaring irregularities, and Yesypenko’s own account of the torture, were ignored by ‘judge’ Dilyaver Berberov from the Russian occupation Simferopol District Court.  On 16 February 2022, he sentenced Yesypenko to six years’ imprisonment and a hefty 110 thousand rouble fine.  It is clear he understood that the charges were fabricated as the sentence was significantly lower than the 11 years demanded on 15 February by ‘prosecutor’ Yelena Podolnaya.  The appeal hearing is still pending.