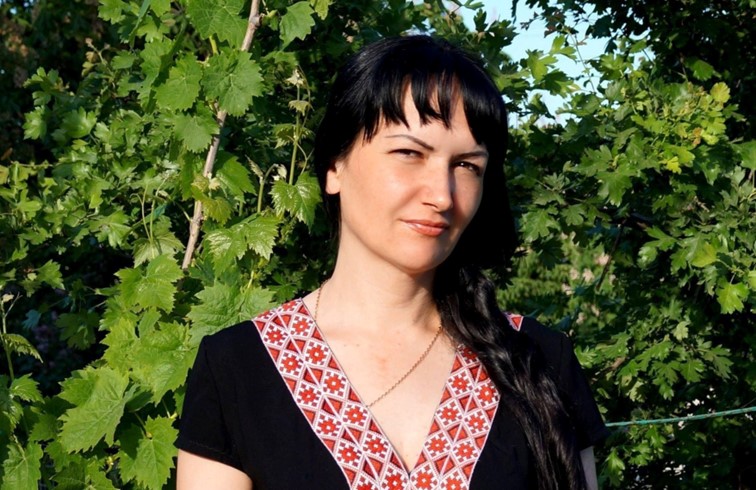 The Russian FSB who abducted and tortured Iryna Danilovych in April this year see no need to deny that the charges used to imprison the Crimean civic journalist, nurse and rights defender were fabricated. Quite the contrary, since an FSB employee told Iryna, in front of witnesses, that he would have planted more explosives, and added drugs as well.

The Crimean Human Rights Group has received a hand-written statement from Danilovych, who is imprisoned in the Simferopol SIZO [remand prison] in occupied Crimea.   She says that there has been no end to “the aggressive and illegal actions” by FSB officers against her, adding that on 5 July, while being taken by an FSB convoy to the Russian-controlled ‘Kievsky court’, she received physical injuries. “On 21 July 2022, while they were moving me and five other people from the FSB department to the Simferopol SIZO, an FSB convoy guard (in front of five witnesses), in a particularly aggressive manner, expressed the view that the FSB operational officers had planted too little explosives.  He openly stated that if he had been among them, he would have planted more and would not have forgotten to plant a kilogram of drugs as well.”

Danilovych has herself said that the events that led up to her imprisonment were more like an abduction, than an arrest, with this assessment shared both by Ukrainian and international human rights groups.  She was seized in the early morning of 29 April at a bus stop, as she was making her way home after work in Koktebel, and disappeared for almost 13 days.  Although her lawyer was told that the Russian enforcement bodies knew nothing about her whereabouts, it was clear that they were involved since they had also carried out a search of the home Iryna shares with her parents in Vladyslavivka, near Feodosia.

It was only on 11 May that Iryna’s lawyer, Aider Azamatov, finally received confirmation that she was imprisoned in the Simferopol SIZO.  She had only formally been detained on 7 May, meaning that the FSB were holding her illegally and incommunicado in their premises for eight days before coming up with a charge and bringing her before an occupation court.

During those first eight days, she was forced to undergo a so-called lie detector test, with the FSB threatening that she “would be taken to the forest” if she concealed anything.  Over the entire period, she was only given anything to eat once a day and was placed under huge pressure.  This was used by the FSB to extract signatures to blank pieces of paper with the FSB claiming that she would be released while she had signed them.

Instead, the FSB asserted that they had ‘found’  200 grams of explosives in her handbag, and came up with the charges under Article 222.1.  While concealing Danilovych’s whereabouts from the lawyer of her choice, the FSB foisted their own ‘lawyer’ to imitate legal representation on the paperwork.

Iryna Danilovych has described the charges as pure fabrication.  In her words:

“I think that this was more akin to an abduction, than an arrest.  I was not presented with any documents sanctioning this.  After being taken to the FSB building in Simferopol, I underwent a total search which was taped by FSB employees.  No explosive substances were found, and there were glasses in the glasses case, with all of this recorded on camera. The FSB employees gave me back my bag, with my things, but then, three days later, they took it away again. They only laid these charges during the night from 6 to 7 May.  Before that there were no explosive substances. The explosives appeared only after they took my handbag away.  To this day, I haven’t even seen them, nobody’s shown or presented me with anything.  All of those eight days, I was in an FSB basement under constant psychological pressure. I therefore consider this charge to be a falsified fabrication.”

There are other grounds for believing the “200 grams of explosives” to have been planted.  The officers who carried out a search of Danilovych’s home on 29 April refused to leave a copy of the search warrant, but did have one, with this evidently preceding the alleged ‘finding’ of explosives.  Iryna’s father recalled that it said something about his daughter being accused of passing on ‘non-confidential information to an NGO’.  The FSB officers told him that she was being arrested for ten days, although no documents to this effect were presented either then, or later.

The ’hearing’ on 5 July at the ‘Kievsky court’ was to extend her detention until 6 September.  There are no grounds for her imprisonment, but this is invariably ignored by the ‘court’.  Iryna is being held in a cell at the SIZO with 13 other women.

Iryna Danilovych is, by profession, a nurse who had also become active as a civic journalist reporting on medical issues in occupied Crimea, as well as writing for Crimean Process, a civic initiative reporting politically motivated trials and other independent media.   She clearly antagonized the occupation authorities by heading the Crimean branch of the Alliance of Doctors, a Russian (and Crimean) trade union and by her involvement in attempts to obtain the supplementary payments promised to medical workers at the beginning of the pandemic and to highlight the lies told about the number of casualties, etc. Despite the danger under Russian occupation, Danilovych spoke openly about the situation in her hospital in Feodosia.  She explained in an interview to Crimean Realities that the situation with covid was much worse than the official statistics admitted. She had every reason to know as her own father was infected with covid while in hospital after a heart operation.

The Ukrainian human rights NGOs who issued a statement on Danilovych’s disappearance reported also that the civic journalist had circulated information about the war Russian is waging against Ukraine, and that her earlier involvement in the trade union movement had led to her dismissal from her previous job and to threats of legal action.

The international human rights NGO Front Line Defenders has also spoken out in defence of Iryna.  They note that she had come under ever-increasing attack for her human rights work, and report that in December 2021 a series of publications labelling her as a ‘foreign agent’ were posted in the Telegram Channel “Lis i voron”.

Further confirmation that Danilovych is facing political persecution is seen in the fact that she was formally declared a so-called ‘media foreign agent’ by Russia’s justice ministry on 3 June 2022.  This was over a month after she was abducted,  held incommunicado, with her father told this was over her divulgence of ‘non-secret’ information to NGOs, and less than a month after the FSB suddenly ‘found’ 200 grams of explosives in a bag that had already been thoroughly examined on video.

As reported, Russia has made it extremely dangerous to engage in formal or civic journalist activities in occupied Crimea.  Eleven Crimean Tatar civic journalists, including Nariman Dzhelyal, Remzi Bekirov and Server Mustafayev, are either serving or facing huge sentences on equally absurd charges. Both the manner in which Danilovych was effectively abducted and held for almost two weeks incommunicado, and the dubious charges are ominously reminiscent of the internationally condemned persecution of Ukrainian journalist Vladyslav Yesypenko.  He was seized by the FSB while in occupied Crimea, carrying out journalist work for RFE/RL’s Crimean Realities, and eventually sentenced to six years’ imprisonment (details here).