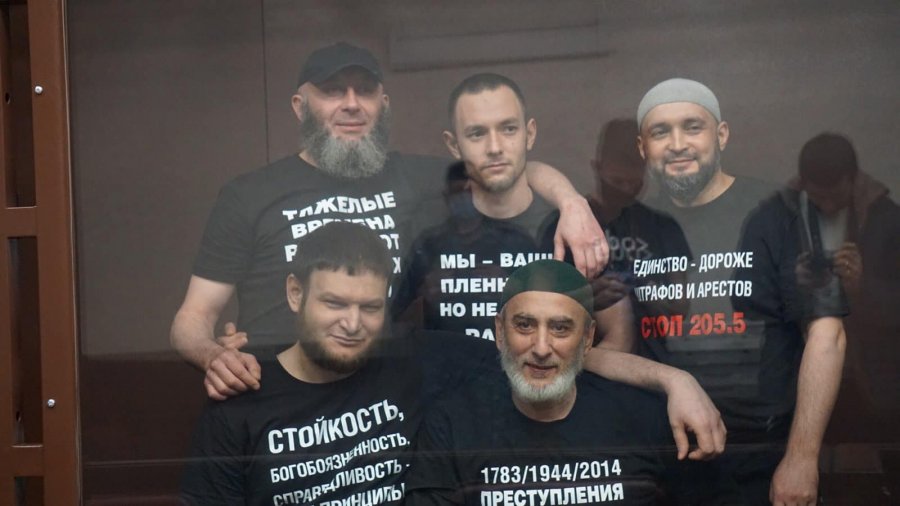 From top left clockwise Risa Izetov, Rayim Aivazov, Farkhod Bazarov, Shaban Umerov, Remzi Bekirov , 10 March 2022 Each of the T-shirts has captions about the political persecution the men are suffering. Aivazov’s, for example, says: We are your prisoners, but not your slaves Photo Crimean Solidarity

A Russian court has sentenced journalist Remzi Bekirov and human rights activist Riza Izetov to 19 years’ imprisonment, with three other Crimean Tatar civic activists receiving only slightly shorter sentences.  None was accused of any recognizable crime and the arrests in 2019 of the five men and 20 other journalists and civic activists were internationally condemned as an attempt to silence those seeking to tell the world of human rights violations in Russian occupied Crimea and to help victims of persecution.   Such horrific persecution of Crimean Tatars who have committed no crime highlights the critical need to ensure that Russia is defeated in its war against Ukraine and that western countries make it quite clear that sanctions will remain, and hopefully be intensified, until Russia ends its occupation.

Remzi Bekirov (b. 1985), Crimean Solidarity and Grani.ru journalist and Riza Izetov (b. 1979), a lawyer and human rights activist, were both sentenced to 19 years, with the first five in a prison, the worst of Russia’s appalling penitentiary institutions, and the rest of the sentence in a harsh regime prison colony.  The ‘court’ also imposed an 18-month term of restricted liberty after the main sentence.

Shaban Umerov; Rayim Aivazov and Farkhod Bazarov had also responded to the mounting repression in Crimea under Russian occupation by helping political prisoners and / or their families, as well as attending political trials.

Shaban Umerov (b. 1969) and Rayim Aivazov (b. 1994) were sentenced to 18 years and 17 years, respectively, with the same conditions and term of restricted liberty as those imposed on Bekirov and Izetov.

Farkhod Bazarov (1986) was sentenced to 15 years, with the period in a prison reduced by a mere two months, and a one-year term of restricted liberty.

The men are all parents, whose children, if Russia gets its way, will scarcely see their fathers until well into adulthood.

All of these sentences are grotesque miscarriages of justice, but there is an additional element of cynicism with respect to Aivazov’s sentence as the charge against him was made much worse because he refused to be silent about the torture which the Russian FSB used against him.

At least two of the men, Remzi Bekirov and Riza Izetov, had already suffered harassment from the occupation regime before they and 23 other Crimean Tatar journalists and civic activists were arrested in the worst attack to date on the Crimean Tatar human rights movement on 27 March 2019 (and slightly later in two cases)

The mass operation on 27 March 2019 around international condemnation and demands for the men’s release, from, among others, the US State Department, Human Rights Watch, Freedom House and Civil Rights Defenders.  All 25 men have been recognized by the Memorial Human Rights Centre as political prisoners, and their release is repeatedly demanded in resolutions from the UN General Assembly, the European Parliament and other international structures.

It was probably because of this international protest that the ‘trial’ was split into five identical clones.  One of the other ‘trials’ is just coming to an end, and more appalling sentences can, unfortunately, be expected.

In November, William Taylor, former US Ambassador to Ukraine, wrote to Remzi Bekirov in prison, expressing admiration for Bekirov’s work as a journalist in occupied Crimea and clearly stating that Bekirov’s is unjustly imprisoned.  He told Remzi that “your work as a journalist in Crimea is the essence of courage and commitment – courage in the face of Russian oppression and commitment to the principles of freedom and independence. <> You are an inspiration, not only to your fellow Ukrainians, but to freedom-loving people around the world. Europeans and Americans are appalled at your treatment and committed to your release.”

Remzi’s work as a journalist has made him particularly well-known, however Ambassador Taylor’s words apply to all of the Crimean Tatars who were arrested on 27-28 March 2019 or shortly afterwards.

All of the men were accused only of ‘involvement’ in the peaceful transnational Hizb ut-Tahrir party.  This is legal in Ukraine and most other countries, however a highly secretive, unexplained and probably politically motivated ruling by Russia’s Supreme Court in 2003 declared an organization not known to have committed any acts of terror anywhere in the world ‘terrorist’.  The men sentenced on 10 March 2022 faced the more serious charge of ‘organizing a Hizb ut-Tahrir group’ under Article 205.5 § 1 of Russia’s criminal code  The others are all charged with involvement in such an alleged group (Article 205.5 § 2). In March 2020, all 25 men were also charged, under Article 278, with “planning a violent seizure of power and change in Russia’s constitutional order”.  Not one of the armed searches that preceded the men’s arrest uncovered any weapons or ammunition, nor, in fact, did the FSB ever make any real pretence of looking for them.

The purpose of such ‘terrorism’ charges was clearly recognized by international human rights NGOs, with Human Rights Watch stating that attempts to portray politically active Crimean Tatars as terrorists were aimed at silencing them, and Freedom House and Civil Rights Defenders equally clear that the arrests were to terrorize Crimean Tatars, not about fighting ‘terrorism’.

These ‘trials’ are so flawed that they do not even pretend to require more than ‘evidence of involvement’ in an organization that is legal in Ukraine and entirely non-violent,

In fact, however, they do not even require real evidence of ‘involvement’.  These ‘trials’ are all based on FSB-loyal ‘experts’ claiming to find ‘proof’ of involvement in illicitly taped and innocuous discussions about religion, politics, and even, in this case, courage  Although the men were all arrested in the first half of 2019, the conversations were taped back in 2016, making it quite clear that there was nothing even remoting resembling ‘terrorism’ in them, or even plausible proof of involvement in Hizb ut-Tahrir  in them

During the ‘trial’ at the Southern District Military Court in Rostov (Russia), the defence repeatedly demonstrated evidence of, for example, tampering with the illicitly made tapes, of primitive mistakes exposing the level of the so-called ‘religious expert’, Muhammed Zaripov, and of other flaws.

In his last report on occupied Crimea, the UN Secretary General was scathing about Russian convictions based almost exclusively on anonymous testimony, and about the role played by Russian judges in upholding such practice and preventing the defence from exposing the flaws in this alleged ‘testimony’.  He pointed to credible evidence that the judges are effectively taking the side of the prosecution.  This was particularly glaring in the court’s refusal to allow evidence that would have confirmed Rayim Aivazov’s account of the torture he was subjected to (details here).  Aivazov’s account, it should be stressed, provided further confirmation of the already considerable evidence that ‘anonymous witnesses’ are often people who have themselves been tortured and / or threatened with imprisonment if they do not collaborate with the FSB.

Such behaviour by the ‘judges’ in this case:  Oleg Volkov (presiding); Vitaly Mamedov and Magomedbasir Shuyapov make it quite clear that they were fully aware that they were, on 10 March, sentencing five men to horrific terms of imprisonment for their civic position and courage.

The letters tell them they are not forgotten, and show Moscow that the ‘trial’ now underway is being followed. The above sentences will, of course, be appealed, so for the moment, the men will probably remain at the addresses below.