Russia deports Ukrainians to occupied Donbas, forcing them to fight its war against Ukraine 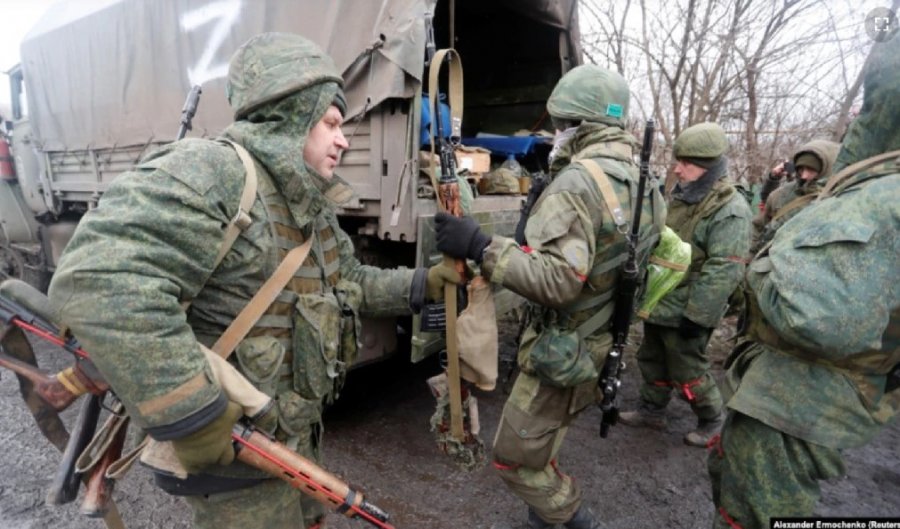 Russia has a problem manning its aggression against Ukraine, and one of the methods it is using is forcing Ukrainians from occupied territory to fight against their fellow Ukrainians.  Nor is this only on the territory under Russian occupation since 2014.  One of the motives for the forced deportation reported from most areas that the Russian invaders have managed to seize since 24 February 2022 appears to be to send men, against their will and without training, to the front line.

The city of Popasna in Luhansk oblast has been under Russian occupation since 8 May, following heavy Russian attack.  According to Ukraine’s Human Rights Ombudsperson Liudmyla Denisova, the Russians immediately began forcing residents at gunpoint to leave for Pervomaisk and Stakhanov, two cities within the Russian proxy ‘Luhansk people’s republic’ [LPR]  Despite fierce battles for the city over two months and serious devastation, around 1500 residents had previously refused to be evacuated.

On 14 May,  Luhansk Regional Governor, Serhiy Haidai, reported that the Russians are ‘mobilizing’ those men who were taken against their will to LPR and forcing them to fight against Ukraine.

It became clear back in March that the Russians were carrying out so-called ‘filtration’ of residents of Mariupol and a large number are now known to be held in ‘filtration camps’ on the territory of the proxy Russian ‘Luhansk and Donetsk republics’.  On 16 April, Petro Andriushchenko, Advisor to the Mayor of Mariupol, reported that Russia was attempting mass ‘filtration’ of the entire male population, with this involving stripping them and checking any tattoos; scrutinizing telephones and interrogations, aimed at finding those deemed ‘unreliable’ (for their pro-Ukrainian position, friends defending Ukraine, etc.)   Others were to be sent to fight against Ukraine.  It is unclear how many men are involved, but the same methods have certainly been reported in parts of the Zaporizhzhia, Kherson and Kharkiv oblasts while under Russian control.

After details emerged of Russian conscripts being sent to fight in Ukraine, the Kremlin and Russian defence ministry claimed to have known nothing about this and said it would not happen again.  Just as in 2014, this is almost certainly not the case, but Russia has introduced such draconian measures against the media and NGOs, that there is little chance of learning the numbers involved.  There are known to have been a number of petrol bomb attacks on military recruitment offices in the Russian Federation.

In the Russian proxy Donbas ‘republics’ [DPR and LPR], ‘general mobilization’ was announced back on 19 February, with businesses, etc. ordered to send 50% of all employees of call-up age to military recruitment offices.

It would seem to have had limited success and Russia and its puppet regimes are increasingly resorting to more draconian measures.  According to Grigory Pyrlik, writing for Current Time, this meant that management with no experience of military matters were supposed to decide who was to be mobilized, and who not.  There were immediately reports of men going into hiding, as well as being grabbed on the street or at home.

Ukrainian human rights defender Pavlo Lisiansky told Current Time about two women who contacted him in despair after their husbands were seized.  A miner’s wife told him that her husband had been forcibly ‘mobilized’ after they surrounded his mine. He was not allowed to take a phone with him. She has not heard anything since then and when she tries to find out, she is told not to try, that “the time will come and all will be told”.  Another woman has told Lisiansky that she and her partner, while going to the market, came upon a military patrol who asked to see her partner’s ID, then demanded that he had to come with them to the military recruitment office.  She too has heard nothing from him.

On 2 March, the Ukrainian Armed Forces posted a video showing a group of supposed ‘Russian soldiers’ who were, in most cases, Ukrainians, with no military background, who had been told that they were being sent for military training, but were in fact sent to war. The men had, fortunately, surrendered as should any Ukrainians forced to fight.  The problem is, of course, that the Russian military are sending these men to the frontline, and, even if they are not physically prevented from doing so, they may simply not see a chance of surrendering.

Former Donetsk journalist Denis Kazansky reported back on 11 April that there was a real “hunt” on in ‘L-DPR’ for men of fighting age, with all usual exemptions, like for students or those with disabilities having been forgotten.

In fact, any pretence appears to have been abandoned on 20 April with the Russian proxies eliminating any need for a medical examination.  According to Serhiy Haidai, the official excuse was that there was ‘a lack of specialists’.  The Russian military police, he added, are also carrying out systematic raids on the street and in places where potential ‘conscripts’ are believed to be living.

The only way left to avoid being sent, without training, and without proper gear, to fight other Ukrainians, or most likely, be killed immediately, is to pay a bribe.  Haidai could even name the amounts – from five thousand roubles if you pay a person (persons) directly where you were detained, and from 75 thousand roubles up if sent to district branches of the ‘interior ministry’.

Russia’s use of conscription in occupied Crimea and all of the above cases of forced mobilization are in open violation of international law.  Article 51 of the Fourth Geneva Convention states unambiguously that “the Occupying Power may not compel protected persons to serve in its armed or auxiliary forces. No pressure or propaganda which aims at securing voluntary enlistment is permitted”.

It is clear why Russia wants to use Ukrainians from occupied territory. The Kremlin is probably hoping to be able to rehash its lies about the war in Donbas being an ‘internal conflict’, and has considerably more chance of treating men like cannon fodder without inconvenient statistics eventually coming out in Russia.