Russia installs its propaganda TV after seizing Kherson and imposes 15-year sentences for reporting its invasion of UkraineUkrainian survivors of the Holocaust demand Putin and Russia get out of Ukraine Russia continues its carnage, flouting binding order from ECHR to stop bombing civilians in UkraineBabyn Yar bombed by Russia, 80 years after Nazi Massacre of Ukrainian Jews Russia proposes 15-year sentences and threatens 'treason charges' for telling the truth about its war crimes in UkraineRussian schoolchildren told that Russia is bombing and killing Ukrainian children in ‘self-defence’ Putin miscalculated. Russia is fighting “an army of 40 million Ukrainians” Chief Rabbi of Ukraine demolishes Putin’s excuse for Russia’s invasion Russia bombs a Ukrainian kindergarten and apartments in its war against independent Ukraine Putin will continue attacking until Russia is stopped. Help Ukraine defend its freedom today!Russian Rule of Lawlessness in Occupied Crimea and DonbasArtist disappears after arrest for pro-Ukrainian anti-war protest in Russian occupied Crimea Ukrainian seized and sentenced in Russian-occupied Crimea for pro-Ukrainian social media commentsImprisoned in occupied Crimea for opposing Russia’s war against Ukraine Young Crimean Tatar likely tortured into ‘confessing’ to anti-war protest Young Crimean sentenced to 3 years after ‘confession’ almost certainly extracted through torture Russian Prosecutor General given power to close media for ‘discrediting the army’ through truth about the war against UkraineJail or steep fines in Russian-occupied Crimea for playing a Ukrainian anti-war song or for saying ‘Glory to Ukraine’ 61-year-old Russian given 7-year prison sentence for criticizing Russia’s war against Ukraine, in bitter déjà vu from Soviet times Russians abduct, torture and imprison young Crimean Tatar from Kherson oblast, then come for his father
• Topics / War crimes 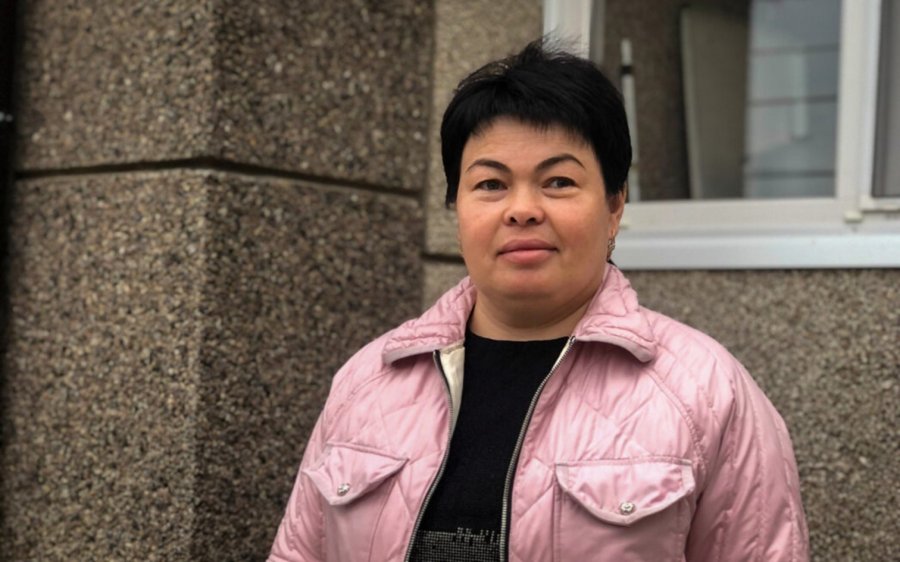 Geography teacher Susanna Bezazieva told her students in Russian-occupied Crimea that Ukrainians are defending their homes, their freedom and independence.  For this, she lost her job in a Dzhankoi school and faced threats from the police.  Other Crimeans have been prosecuted for expressing anti-war sentiments, with the real number unknown, as many prefer to remain silent, fearing even worse persecution.

Bezazieva has refused to be intimidated and spoke with a Graty correspondent about her experience.  Although she was allowed to formally resign, after seventeen years as a teacher, she says that she was forced out of her job because of a conversation with some students about the war.

“On Ukrainian territory citizens are simply defending their homes, fighting for their freedom and independence.”, she said.  “One of the girls said that they – Ukrainians – are planning to attack us. To that I replied that there is no military action in the Crimean peninsula, we are not being bombed, we are not being killed.  It’s in Ukraine that civilians are being killed, children, and that is a huge tragedy.

I told them that the rights of the Russian-speaking population had never been infringed on Ukrainian territory.  I studied there after all, and never felt that.  The pedagogues from Melitopol  [in the Zaporizhzhia oblast, where she received her professional education] knowing that there were students from Crimea, changed into Russian.”

“The girls said that I had convinced them although I wasn’t planning to try to change anybody’s opinion, and simply expressed my personal opinion.”

Within a few days of Russia’s total invasion of Ukraine, its legislators had passed a law imposing up to 15-year sentences for telling the truth about the war which is, in effect, with Susanna Bezazieva was doing.

Three days after that conversation, she was summoned to the School Director’s office, where she was confronted by the director and two other teachers in charge of the education and academic process.

They claimed that she had commented on the ‘Z’ on a girl’s T-shirt.  She refuted this and explained what the conversation had been about, with the director demanding to know what right she had to explain what Nazism and fascism are during the break (!).

The Director threatened “a serious turn of events” and warned her of the new legislation on so-called ‘fakes’ and anti-war utterances.  That was on the Friday.  By the following Monday, she was summoned again and told that the parents were demanding her dismissal.  The parents were allegedly threatening to go to the police and FSB [Russian security service], and wanted her “to answer before the law for her words”.

Bezazieva was put under huge pressure to resign, purportedly on her own initiative, and told to keep quiet or else she could end up facing charges that would mean that she could never work as a teacher again. Although she is bringing up her 4-year-old daughter alone and is now left without means of existence, she decided she had no other option but to resign.  That was on 19 April, the same day that the police came for her.  Fortunately, she understood her rights and refused to provide any ‘explanation’ without her lawyer present.  That got the police nervous, and they began denying that she had been detained and claiming that they just wanted “to talk” to her.   They too repeated nonsense about a T-shirt with the Russian war symbol ‘Z’ on it.

As of 22 April, Susanna Bezazieva had lost her job and was facing threats of further ‘consequences’ for the above, entirely truthful and innocent words.

Other prosecutions and / or harassment

In early March, the Crimean Human Rights Group reported that parents had been receiving ‘warnings’ that participation by them or their children in anti-war protests was ‘inadmissible’, and could lead to prosecution – either administrative, or criminal under the new legislation on so-called fakes and ‘discrediting’ of the Russian armed forces.

On 31 March, civic activist Sergei Akimov was fined a fairly steep 35 thousand roubles for supposedly ‘discrediting the Russian army’ through a placard on his car with the word ‘War’ crossed out.  He had had two visitations from the criminal investigations department two days earlier, the second time being with masked enforcement men and officers from the so-called ‘centre for countering extremism’ drawing up charges against him. On 1 April, he was also interrogated by the FSB.

Radio Svoboda’s Crimean Realities reported on 29 April that Akimov is unusual in being willing to openly talk about this prosecution. Most do not want to give their names as they fear even greater persecution and pressure. One person spoke with them, but asked

They spoke with one person who provided his details, but asked for them to not be published, out of fear or further persecution.  He was summoned to the prosecutor’s office soon after Russia’s total invasion.  He was handed a protocol on administrative prosecution and warned he would be under their surveillance for at least a year.  The prosecution was, quite literally, over two posts on the social media network VKontakte.  As seems to have been the case with Bezazieva, there was distortion regarding the allegations against him.  The protocol, for example, claims that one image (and post) contained a photo of Adolf Hitler with the image of a right-sided swastika, while the other was “the Wolfsangel, belonging to the infantry division of the S ‘Landstorm Nederland’.

In fact, the person was demonstrating the similarity between the Wolfsangel and the ‘Z’ (on its side) that has become the Russian war symbol.  The protocol also fails to mention that the other post was not of Hitler alone, but of Hitler and Russian leader Vladimir Putin, with the aim being to demonstrate the parallels between them.  The omission was clearly deliberate, and the charge against him of supposed ‘propaganda or demonstration of Nazi or extremist organizations’ symbols’ (under Article 20.3 of Russia’s code of administrative offences. He was fined two thousand roubles.

The person believes that his case confirms that in Crimea you face prosecution just for rejecting the war and supporting peace.  You’ll get into trouble if you go out on the street and shout ‘No to war!’, and be considered a hero if you go out and shout ‘Hit Ukraine!’  This is despite the fact that calls to call are in violation of the Russian criminal code.  He has the feeling that fascism has risen up again, and says it’s good his grandfathers, both of whom fought the Nazis, are not alive to see this.  “They fought fascism so that it re-emerged in this country”

One person, a 60-year-old pensioner, is currently in detention on charges that would seem to reflect her opposition to Russia’s war against Ukraine.  The woman, whose name had not been revealed, despite publication of her photo, could face up to five years’ imprisonment under Article 244 § 2 of the Russian criminal code over what is claimed to have been ‘desecration of the grave’ of a person killed in the war against Ukraine.