Russian invaders use Mariupol supermarket to dump the bodies of their victims After destroying Mariupol, Russia offers its victims money but only if they agree to blame Ukraine Russian FSB produce ‘refugee’ propaganda video blaming Ukrainian soldiers for Russia"s war crimes in Mariupol Russia continues bombing Mariupol while producing propaganda videos about its ‘humanitarian aid’Russia responds to International Court order to stop bombing Ukraine by destroying Mariupol Theatre sheltering familiesRussian invaders take Mariupol intensive care hospital and its patients hostage Mass graves of the Ukrainian civilians Russia claims it is not killingTerror and abductions as Russia tries to break Ukrainian resistance in Kherson and other occupied citiesUkrainian journalist Oleh Baturin feared abducted by Russian invaders in Kherson oblast Mayor of Melitopol Ivan Fedorov abducted after refusing to collaborate with the Russian invaders Russian priest arrested and prosecuted for sermon opposing Russia’s war against Ukraine Russia effectively admits it deliberately bombed the maternity hospital in Mariupol that killed three patients, including a childRussia brings grotesque propaganda to Berdiansk after Ukrainian journalists refuse to collaborate Russian invaders murder Ukrainian volunteers Impassioned appeal from Ukrainian Muslim leader in face of Russia’s war to destroy Ukraine Russia is forcing Ukrainians from occupied Crimea and Donbas to fight in its invasion of Ukraine Children among the dead after Russian invaders opened fire on fleeing civilians Russia installs its propaganda TV after seizing Kherson and imposes 15-year sentences for reporting its invasion of UkraineUkrainian survivors of the Holocaust demand Putin and Russia get out of Ukraine Russia continues its carnage, flouting binding order from ECHR to stop bombing civilians in Ukraine
• Topics / War crimes

Mariupol in danger of cholera outbreak, but Russian invaders concentrate on removing signs in Ukrainian 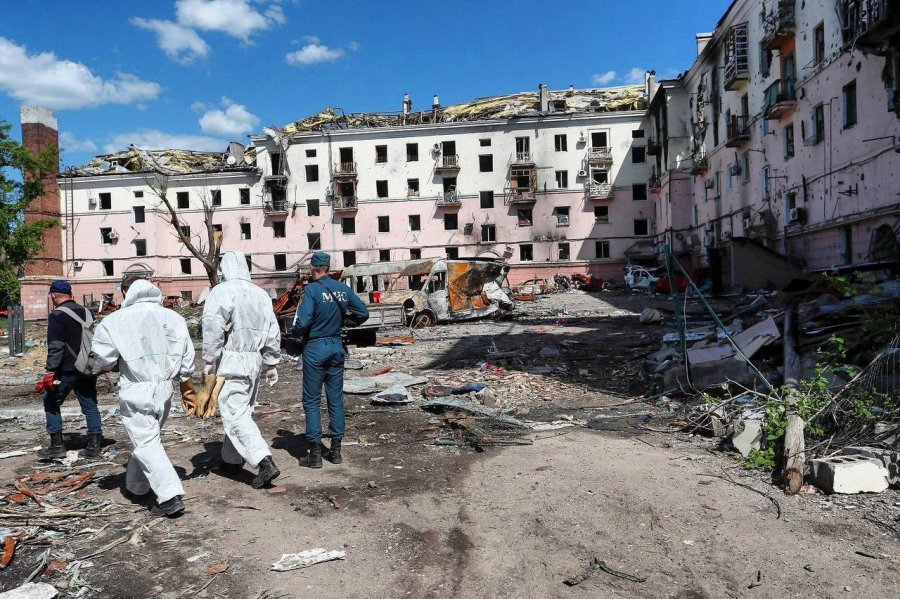 Mariupol Photo posted on 6 June by the Mariupol City Council

Russia’s relentless destruction of Mariupol has left the city and its residents in acute danger of a cholera outbreak.  Amid such carnage and devastation, the invaders are clearly unable to even restore water supplies, however they could at least create humanitarian corridors to enable vital supplies to reach the city.  Instead, they appear to be continuing their hunt for “Ukrainian nationalists” and prioritizing the change of road signs from Ukrainian to Russian.

Both and have warned that the danger from cholera or other epidemics is real and immediate.  Although Kuzin concentrated on the heightened measures undertaken by the Ukrainian authorities since 1 June, and his assurance that the country can cope with any cholera outbreak, the situation in Mariupol is not currently under Ukrainian control, and is, after months of Russian siege and bombardment, catastrophic.  The real Mariupol city authorities fear that there could be tens of thousands of deaths in occupied Mariupol, and list several critical factors.   Following the horrific destruction caused to over 90% of the city’s infrastructure, there are no centralized water supplies and sewage.  This is while the city “is literally drowning in rubbish and sewage”.  People were forced to bury those killed by the Russian bombing and shelling or who died from the horrendous conditions in makeshift graves in courtyards and city parks.  Petro Andriushchenko  earlier reported that some of the bodies in mass graves were believed to have been washed to the surface and were being dumped in a former supermarket.  The situation is further compounded by the very hot weather which is causing the rapid decay of bodies still left under the rubble of buildings that were destroyed in the bombing.

As if this were not enough, Russia’s siege and blocking of humanitarian aid has led to a deficit in medicines in the city.  The invaders a medical staff and equipment to other places, leaving Mariupol with virtually no medical personnel and no functioning hospitals.  The Russians claim to have opened four hospitals, however, Andriushchenko notes, that not one of these can treat patients who need to stay in hospital. 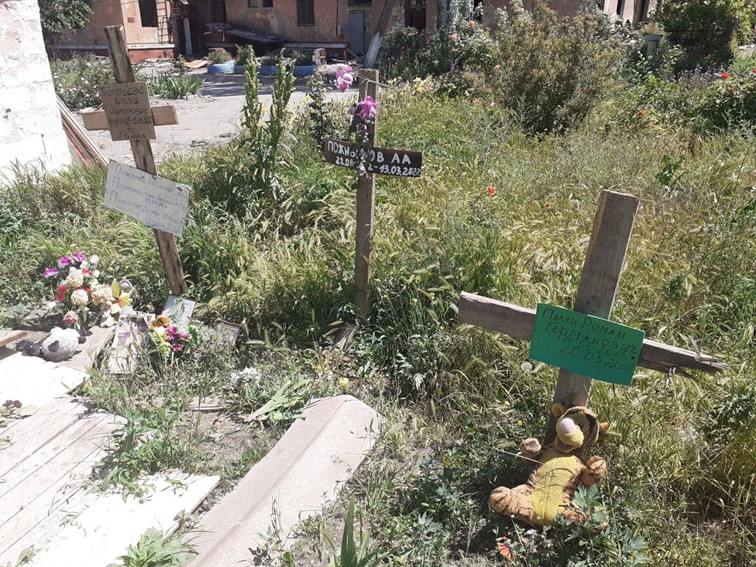 It is clear that those illegally occupying the city do understand the dangers.  The city authorities on 7 June that the Russian-installed leader in occupied Mariupol, Kostiantyn Ivashchenko had announced a ban on swimming in the Sea of Azov.  Formally, this is because of the danger from mines, however the city authorities are certain that the real reason is the serious danger of contagious diseases and threat of a cholera outbreak.

Ukrainian journalist Denis Kazansky of an attempt by the occupation regime to get running water to some apartment blocks.  The water simply flowed down the building since the Russians have virtually not left any pipes undamaged.

These are enormously serious problems that the Russians and their puppets in the so-called ‘Donetsk people’s republic’ [DPR] should be addressing. Instead, the ‘DPR’ militants to still be hunting down ‘Ukrainian nationalists’, Ukrainian Azov Battalion defenders of Mariupol.

Two other activities began as soon as Russia first gained control over any part of the city, and are ongoing.  One is, of course, the inevitable propaganda measures, including with the use of huge screens, aimed at deceiving the surviving residents of Mariupol into believing that Russia has ‘liberated’ them.  As reported, Russia is also forcing the Mariupol residents it effectively deported to Russia or occupied Donbas to take part in ‘testimony’ and / or propaganda videos where they blame Ukrainian soldiers for all of Russia’s crimes. 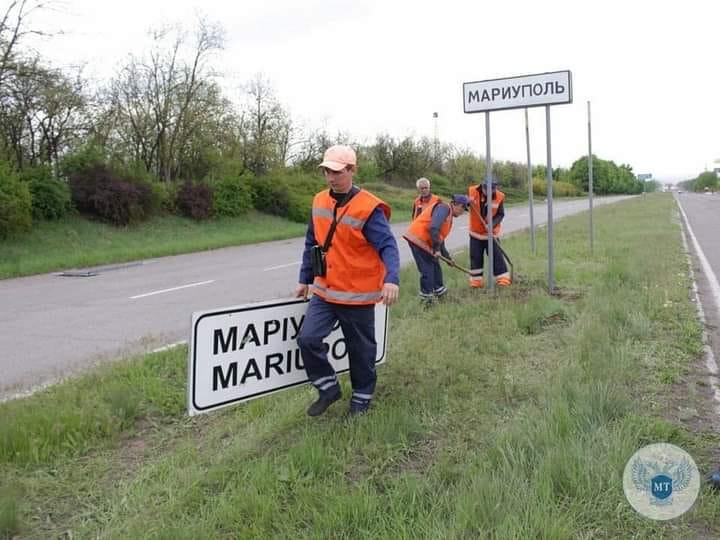 The other activity began immediately, with road signs in Ukrainian and English being replaced by ones only in Russian.  On 7 June, in a city almost razed to the ground and faced with the danger of a serious cholera outbreak, propagandists, filmed by the Kremlin-funded Russia Today, or RT the beautiful stele at the entrance to Mariupol being changed so that the city’s name was presented in Russian, or, as the speaker claimed, “in a normal language”.