After destroying Mariupol, Russia offers its victims money but only if they agree to blame Ukraine Russian FSB produce ‘refugee’ propaganda video blaming Ukrainian soldiers for Russia"s war crimes in Mariupol Russia continues bombing Mariupol while producing propaganda videos about its ‘humanitarian aid’Russia responds to International Court order to stop bombing Ukraine by destroying Mariupol Theatre sheltering familiesRussian invaders take Mariupol intensive care hospital and its patients hostage Mass graves of the Ukrainian civilians Russia claims it is not killingTerror and abductions as Russia tries to break Ukrainian resistance in Kherson and other occupied citiesUkrainian journalist Oleh Baturin feared abducted by Russian invaders in Kherson oblast Mayor of Melitopol Ivan Fedorov abducted after refusing to collaborate with the Russian invaders Russian priest arrested and prosecuted for sermon opposing Russia’s war against Ukraine Russia effectively admits it deliberately bombed the maternity hospital in Mariupol that killed three patients, including a childRussia brings grotesque propaganda to Berdiansk after Ukrainian journalists refuse to collaborate Russian invaders murder Ukrainian volunteers Impassioned appeal from Ukrainian Muslim leader in face of Russia’s war to destroy Ukraine Russia is forcing Ukrainians from occupied Crimea and Donbas to fight in its invasion of Ukraine Children among the dead after Russian invaders opened fire on fleeing civilians Russia installs its propaganda TV after seizing Kherson and imposes 15-year sentences for reporting its invasion of UkraineUkrainian survivors of the Holocaust demand Putin and Russia get out of Ukraine Russia continues its carnage, flouting binding order from ECHR to stop bombing civilians in UkraineBabyn Yar bombed by Russia, 80 years after Nazi Massacre of Ukrainian Jews
• Topics / War crimes 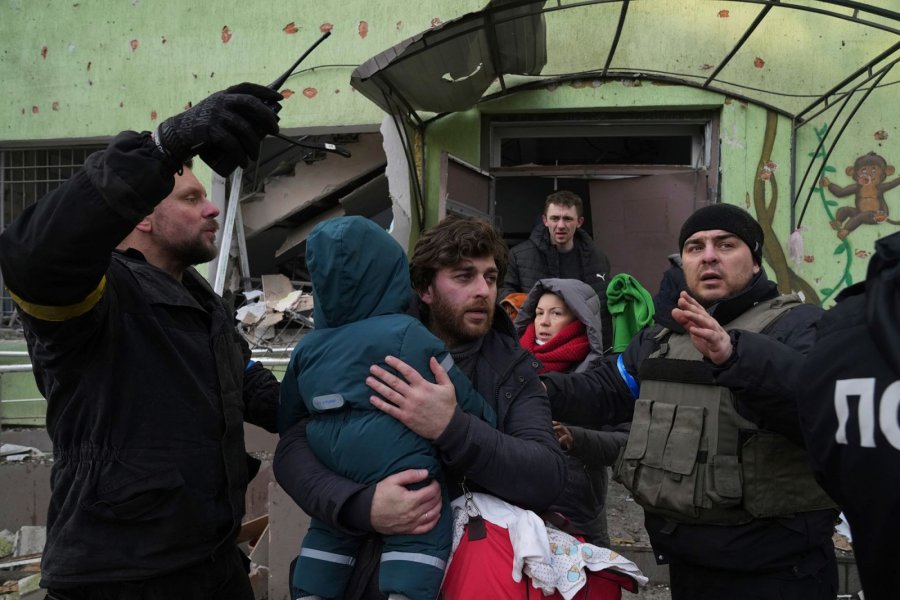 Mariupol A man carrying his child out of the wreckage of the children’s and maternity hospital Photo Evgeniy Maloletka, Associated Press

Two separate sources in Russia have reported that Ukrainian refugees are being interrogated by Russian ‘investigators’ and pushed into providing ‘testimony’ that they came under fire from the Ukrainian Armed Forces.  While the Telegram channels quote unnamed lawyers and volunteers, the experiences cited correspond closely with earlier attempts to concoct testimony blaming Ukraine for Russian war crimes committed in Mariupol.

The channel ‘We can explain’ [Можем объяснить] reported on 31 May that Ukrainian refugees in Russia are being summoned for interrogation, with the investigators demanding that they assert that Kyiv is committing war crimes by killing its own civilians.  These investigators are purportedly questioning the refugees as witnesses in some kinds of criminal investigations.  The lawyers and volunteers who provided this information explain that where the refugees answer that they don’t know or talk of shelling by the Russian army, the investigators insist on getting ‘the version’ that they want (i.e. blaming Kyiv).  One of the lawyers told them that he has not heard of anybody refusing to take part in such interrogations.  The refugees have endured hell and are just trying to get through it all and leave.  He said that they don’t even read their supposed ‘testimony’ and simply sign it.  He has no doubt that all of this will turn into volumes published about the supposed ‘crimes’ of the Azov Battalion, etc.

On 30 May, the Telegram channel Rotonda also wrote of refugees being summoned to the St Petersburg Investigative Committee, with the latter proposing that they gain ‘victim’ status in a criminal investigation.  A Rotonda journalist reported having noticed an advertisement saying that people who had arrived from the territory of the Russian proxy ‘Donetsk or Luhansk people’s republics’ must come to the district department of the Investigative Committee in order to be recognized as victims and take part in ‘investigative activities’. The ad was hanging in a place where the people come seeking registration in St Petersburg.  The journalist rang the number and was told that all refugees are being phoned and that they must come to the Investigative Committee.  They supposedly can, however, refuse to give testimony.

Rotonda also cites comments on social media about such questioning, which is purportedly for “the documentation and presentation of crimes in Ukraine in court”. The questioning can last from an hour and a half to four hours.  A comment from Lyubov Ignatieva speaks of her 82-year-old grandmother who can hardly walk or hear having been summoned, and is disgusted by how they tormented an elderly woman who had spent more than a month in a cellar and obviously could not have told them anything.

One of the refugees was asked about the so-called “explosion” at the Mariupol Drama Theatre, where over a thousand civilians, mainly women, children and the elderly had been seeking shelter from Russian bombing.  Russia is trying to present this as an ‘explosion’ and blame it on Azov fighters.  The Drama Theatre was, in fact, destroyed by a Russian airstrike on 16 March (just hours after the UN’s International Court of Justice ordered Russia to stop all military action).  This horrific crime has been reported in detail by Associated Press which had photojournalists in Mariupol at the time.   AP reported on 4 May that they had carried out further investigations and believed that 600 people had been killed, stating that “the Russian bombing of the Donetsk Academic Regional Drama Theater in Mariupol on March 16 stands out as the single deadliest known attack against civilians to date. An Associated Press investigation has found evidence that the attack was in fact far deadlier than estimated, killing closer to 600 people inside and outside the building. That’s almost double the death toll cited so far, and many survivors put the number even higher.”

While Associated Press has provided the most extensive coverage, it is worth stressing that essentially nobody except Russia, and those who repeat Russian narrative, has ever suggested that this was anything but a Russian airstrike. The international outrage expressed that evening was only compounded by satellite images showing clearly – to viewers and to the Russian pilot dropping the bomb – the sign in Russian CHILDREN both in front and at the back of the building.

Russia is also now trying to concoct ‘testimony’ to blame its 9 March bombing of the maternity hospital in Mariupol on Azov fighters.  This is despite Russian Foreign Minister Sergei Lavrov having effectively admitted that this was a Russian attack, while falsely claiming that the hospital had been taken over by the Azov Battalion.  Moscow presumably understood that there was a huge amount of evidence to show that it had hit a fully functioning hospital and decided to change its story.

It is known that the Russian FSB [security service] have played a role in one earlier fake, not unlike the ‘testimony taking’ now underway. As reported, on 23 March, Russian state-controlled media broadcast a video in which a young woman from Mariupol, now clearly in Russia, parroted the Kremlin’s narrative about the Ukrainian Azov soldiers defending Mariupol, and, in a very muddled way, even claimed that the bombing of the maternity hospital had been carried out “from inside” by Ukrainian soldiers.  The Russian independent MediaZona has provided evidence that the three variants of the video were all produced by the FSB, with state media sent the videos and instructed not to divulge their source.

On 3 April, Associated Press reported on yet another such attempt which tried to undermine huge amounts of video and photographic evidence of the attack by an AP reporter.  The article explains that “A Ukrainian beauty blogger whom Russian officials accused of being a crisis actor when she was interviewed and photographed by The Associated Press in a bombed out Mariupol maternity hospital has emerged in new videos that are fuelling fresh misinformation about the attack.”’  The agency pulls no punches, writing “Russian officials have repeatedly tried to cast doubt on the strike in Mariupol, a key military objective for Moscow, since images were seen around the world and shed light on Russia’s attacks on civilians in Ukraine.”

On 16 May, Petro Andriushchenko, Advisor to the Mayor of Mariupol, reported a plan by the Russian invaders to get ‘written testimony’ claiming that Mariupol was destroyed by Ukrainian soldiers.  He explained that the Russians had announced ‘registration for compensation’, namely a payment of 500 thousand roubles (around 6 thousand USD) for the destruction of their homes, and 3 million roubles (around 33 thousand USD) for the death of a family member. In order to have such applications registered, the Mariupol residents had to write that their property “was destroyed by Ukrainian military” and their family members “were killed by the Ukrainian Army”.

Russia appears to have backed away from any suggestion of ‘compensation’, and is presumably relying on intimidating desperate refugees into providing such false statements instead.

It would be nice to dismiss such Russian attempts at rewriting the facts about their own crimes as absurd and pointless. Unfortunately, these are clearly not aimed only at a domestic audience deprived of anything but the official Kremlin line.  In March, Tim Hayward, a professor at the University of Edinburgh retweeted Russia’s UN representative describing the attack on the Mariupol maternity hospital as "fake news". He then wrote: "As long as we’re still able to hear two sides of the story we should continue striving to do so."   Russia has spent vast amounts of money since 2014 on ‘alternative sides of the story’ about the downing by a Russian Buk missile of MH17 over occupied Donbas, about its invasion of Crimea, about the tragic events in Odesa on 2 May 2014.  The fact that there are those willing to spread such alternative reality makes it imperative that the methods now being used to obtain ‘witness testimony’ are widely publicised.