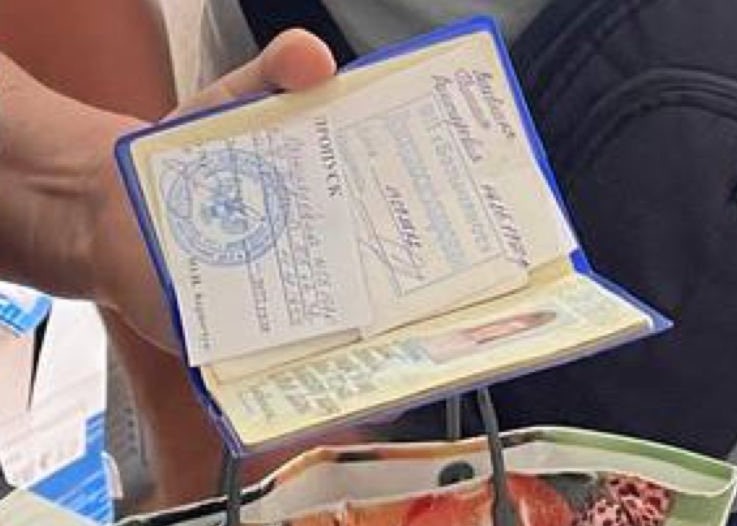 The Russian invaders who have seized control of Mariupol are forcing the remaining residents to carry stamps in their passports, confirming that they have undergone so-called ‘filtration’, as well as passes ‘allowing’ them to move around their own city. A huge number of other residents of Mariupol and other cities Russia is currently occupying have been sent to so-called ‘filtration camps’, where men and women are held in appalling conditions and subjected to interrogation for the Russians to establish their political ‘reliability’.  The fate of those deemed ‘unreliable’ remains unclear, however Russia has already killed several people that the invaders abducted, so there are clearly grounds for concern.

The first reports of such filtration camps emerged at the beginning of April, and a lot is now known about these places which the Mariupol city authorities have described as ‘concentration camps’.

What was not necessarily recalled, and certainly should be, is that Russia and the Russian / Russian-controlled militants in Donbas began talking about ‘filtration camps’ back in 2014.  The difference was, however, that Russia’s propaganda machine then claimed that Ukraine was planning such camps for Russian-speakers in Donbas.  It was these supposed ‘nationalists’ that Russia pretended to be merely ‘helping’ Ukrainians ‘defend’ Donbas from. Ukrainian blogger and journalist Denis Kazansky has, fortunately, been monitoring these lies for the past eight years.  In a recent YouTube video, he shows Alexander Borodai, one of the Russian ‘leaders’ of the so-called ‘Donetsk people’s republic’ in 2014, and now a Russian MP from the ruling United Russia party, commenting on the Russian claim that it was Ukrainian Right Sector nationalists who were planning ‘filtration camps’.  Borodai can be heard asserting that what “they’re saying about the creation of filtration camps is not even fascism, but Nazism, banal Nazism.”

That, of course, Russia prefers to forget with ‘representatives’ of its puppet ‘DPR’, like so-called ‘DPR deputy’ Vladyslav Berdichevsky openly admitting that people are seized and must undergo ‘filtration’.  Berdichevsky does, admittedly, say that “without a document that they have passed through filtration, about the fact that they know who this is, what this is, they won’t be taken to Russia”.  It is clear, however, that even those remaining in Mariupol are subjecting to such ‘filtration’.  As Kazansky rightly points out, those that Russia is trying to identify and isolate as ‘unreliable’ are, in fact, Ukrainians who love their country, who wanted to live peacefully in their city and did not want the Russians to come and destroy it.

Ihor Zakharevych, the so-called leader of occupied Debaltseve, is also quoted by the DPR propaganda publication ‘Donbass decides’ as openly admitting that residents of what he claims to be “liberated” Svetlodarsk will also undergo ‘filtration’.

Worth noting, by the way, that the Russian propaganda outlets that also claim that Svitlodarsk has been ‘liberated’ and that the population are ‘happy’ about this, state openly that the city was seized by members of the so-called Wagner ‘private military company’.  No mention is made of money, of course, however these are well-paid mercenaries, unlike the three foreign prisoners of war whom a ‘DPR kangaroo court’ ‘sentenced to death’ on 9 June.  The two Britons Shaun Pinner (48) and Aiden Aslin (28) and Moroccan Brahim Saadoun are all men who have settled in Ukraine and who were serving in Ukraine’s Armed Forces or Navy (details here).

Russia and its puppets do not openly admit to the exist of effective concentration camps, but there is ample evidence, including video footage, of such places  (details here and here.)

There are known to be such ‘filtration camps’, where people are imprisoned, in numerous sites on occupied ‘DPR territory’ (Bezimenne; Dokuchaevsk; Kozatske; Manhush; Novoazovsk; Olenivka; Starobeshevo and Volnovakha.  It is also likely that some Ukrainians are being taken to the notorious Izolyatsia secret prison in occupied Donetsk.

People end up at such camps if the Russians have checked their phones and found pro-Ukrainian information, videos, etc; or if they have relatives in the Ukrainian Armed Forces, or were themselves earlier in the Armed Forces or enforcement bodies.  At least men are forced to strip so that the Russians or DPR militants can scrutinize any tattoos and also check for any signs that the person has had contact with firearms.

It is surely not necessary to point out that such imprisonment is in grave violation of international law.  At least two Ukrainians seized by the Russians from occupied Kherson (Vitaliy Lapchuk and Denys Myronov) were tortured to death for supporting Ukraine and it is particularly chilling that nothing is known of what the invaders do with those who fail their so-called ‘filtration’.