International experts issue stark warning of Russian genocide against UkraineGrave of more tortured victims of Russian invaders found in Kyiv oblast Raped, shot and thrown in a mass grave by the Russian invaders who turned Bucha into hell Russian invaders mine children’s playgrounds leaving trail of horrific war crimes Mass graves of the Ukrainian civilians Russia claims it is not killingTerror and abductions as Russia tries to break Ukrainian resistance in Kherson and other occupied citiesUkrainian journalist Oleh Baturin feared abducted by Russian invaders in Kherson oblast Mayor of Melitopol Ivan Fedorov abducted after refusing to collaborate with the Russian invaders Russian priest arrested and prosecuted for sermon opposing Russia’s war against Ukraine Russia effectively admits it deliberately bombed the maternity hospital in Mariupol that killed three patients, including a childRussia brings grotesque propaganda to Berdiansk after Ukrainian journalists refuse to collaborate Russian invaders murder Ukrainian volunteers Impassioned appeal from Ukrainian Muslim leader in face of Russia’s war to destroy Ukraine Russia is forcing Ukrainians from occupied Crimea and Donbas to fight in its invasion of Ukraine Children among the dead after Russian invaders opened fire on fleeing civilians Russia installs its propaganda TV after seizing Kherson and imposes 15-year sentences for reporting its invasion of UkraineUkrainian survivors of the Holocaust demand Putin and Russia get out of Ukraine Russia continues its carnage, flouting binding order from ECHR to stop bombing civilians in UkraineBabyn Yar bombed by Russia, 80 years after Nazi Massacre of Ukrainian Jews Russia proposes 15-year sentences and threatens "treason charges" for telling the truth about its war crimes in Ukraine
• Topics / War crimes 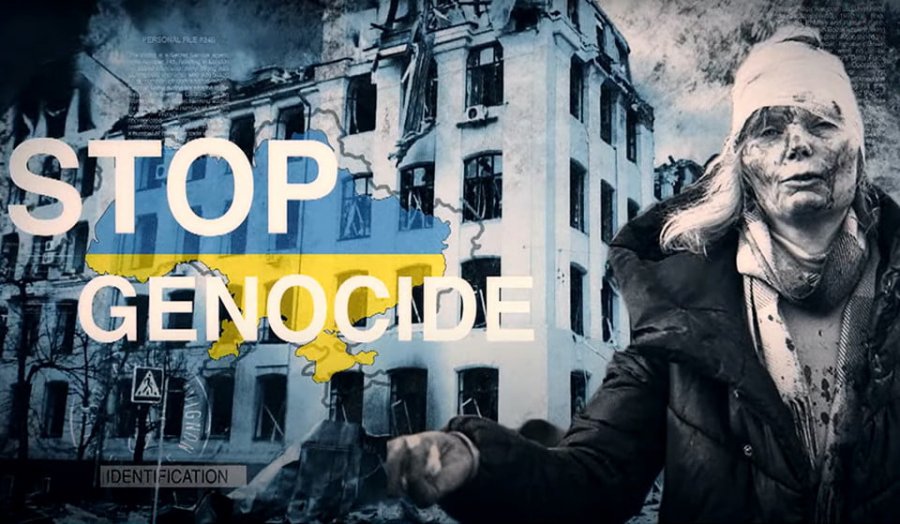 Dmitry Medvedev suggested on 15 June that Ukraine’s very existence “on the world map” may be in question in two years.  This comment from a close associate of Vladimir Putin and the Deputy Head of the Russian Security Council, comes a day after another prominent Russian politician published tweets that quite openly incite to genocide of the Ukrainian nation.  These are the latest of many pronouncements from Russian politicians and Kremlin propagandists that make it impossible to understand why western leaders are still flogging the idea that Russia should not be ‘humiliated’ and that Ukraine should cede territory, purportedly in exchange for ‘peace’.

Medvedev was commenting on a report that Ukraine hopes to receive liquified natural gas through the lend-lease agreement with payment deferred for two years.

“Just a question. Who says that in two years, Ukraine will exist at all on the world map?  Although Americans don’t care – they’ve invested so much in their ‘anti-Russia’ project, that the rest for them is a trifle…”

It should certainly not be a matter of no importance to western leaders that the former (albeit nominal) President of the country which began a full-scale invasion of Ukraine in February, is suggesting that Ukraine’s very existence as a country is in question.

Dmitry Rogozin is a former right-wing politician who currently holds the post of director general of Russia’s Roscosmos space agency.  On 14 June, he went one step further than Medvedev by positively calling Ukraine ‘an existential threat’.

“In general that which has appeared in the place of Ukraine is an existential threat to the Russian people, to Russian history, the Russian language and Russian civilization.

Commenting on Rogozin’s shocking pronouncement, Gundyuz Mamemdov, former Deputy Prosecutor General of Ukraine, noted that such statements fall under the Convention on the Prevention and Punishment of the Crime of Genocide (the Genocide Convention), and could provide proof for Ukraine of genocide in international courts.

As reported here, an independent international study recently warned that there was a real, and serious, danger of Russian genocide in Ukraine.  Among the reasons cited by over 30 recognized human rights lawyers and academics was Russia’s “direct and public incitement to commit genocide”, as well as “a pattern of atrocities from which an inference of intent to destroy the Ukrainian national group in part can be drawn.”

The authors noted the constant denial by high-level Russian officials (including Medvedev) and the State media of the very existence of a Ukrainian identity, and pointed out that “the denial of the existence of protected groups or elements of their identity is an indicator of the specific risk of genocide under the UN Framework of Analysis for Atrocity Crimes”.

“Russian officials and State media repeatedly invoke “denazification” as one of the main goals of the invasion and have broadly described Ukrainians as subhuman (“zombified,” “bestial,” or “subordinate”), diseased or contaminated (“scum,” “filth,” “disorder”) or existential threats and the epitome of evil (“Nazism,” “Hitler youth,” “Third Reich”).  This rhetoric is used to portray a substantial segment or an entire generation of Ukrainians as Nazis and mortal enemies, rendering them legitimate or necessary targets for destruction.

The study did receive some international media attention and was undoubtedly sent, by its authors to those western leaders who have a legal obligation to react to such a strong and substantiated warning of the danger of genocide.  As the authors wrote,

“The Duty to Prevent Genocide.

States have a legal obligation to prevent genocide beyond their borders once they become aware of the serious risk of genocide — a threshold that this report clearly establishes has been met, of which States cannot now deny knowledge. The Genocide Convention imposes a minimum legal obligation on States to take reasonable action to contribute toward preventing genocide and protecting vulnerable Ukrainian civilians from the imminent risk of genocide.”

Almost a month later, there is no indication that the warning has been heeded.  Instead, French President Emanuel Macron has claimed that Russia “should not be humiliated”, while German Chancellor Olaf Scholz has continued to dither over providing even those arms to Ukraine that have been promised.  There are increasing claims that Ukraine must cede some of its territory, despite Russia’s own invasion and attempt to seize both Kyiv and Kharkiv having demonstrated that any ‘peace agreement’ would be broken as soon as Russia was ready to mount a new attack.