Raped, shot and thrown in a mass grave by the Russian invaders who turned Bucha into hell Russian invaders mine children’s playgrounds leaving trail of horrific war crimes Mass graves of the Ukrainian civilians Russia claims it is not killingTerror and abductions as Russia tries to break Ukrainian resistance in Kherson and other occupied citiesUkrainian journalist Oleh Baturin feared abducted by Russian invaders in Kherson oblast Mayor of Melitopol Ivan Fedorov abducted after refusing to collaborate with the Russian invaders Russian priest arrested and prosecuted for sermon opposing Russia’s war against Ukraine Russia effectively admits it deliberately bombed the maternity hospital in Mariupol that killed three patients, including a childRussia brings grotesque propaganda to Berdiansk after Ukrainian journalists refuse to collaborate Russian invaders murder Ukrainian volunteers Impassioned appeal from Ukrainian Muslim leader in face of Russia’s war to destroy Ukraine Russia is forcing Ukrainians from occupied Crimea and Donbas to fight in its invasion of Ukraine Children among the dead after Russian invaders opened fire on fleeing civilians Russia installs its propaganda TV after seizing Kherson and imposes 15-year sentences for reporting its invasion of UkraineUkrainian survivors of the Holocaust demand Putin and Russia get out of Ukraine Russia continues its carnage, flouting binding order from ECHR to stop bombing civilians in UkraineBabyn Yar bombed by Russia, 80 years after Nazi Massacre of Ukrainian Jews Russia proposes 15-year sentences and threatens 'treason charges' for telling the truth about its war crimes in UkraineRussian schoolchildren told that Russia is bombing and killing Ukrainian children in ‘self-defence’ Putin miscalculated. Russia is fighting “an army of 40 million Ukrainians”
• Topics / War crimes 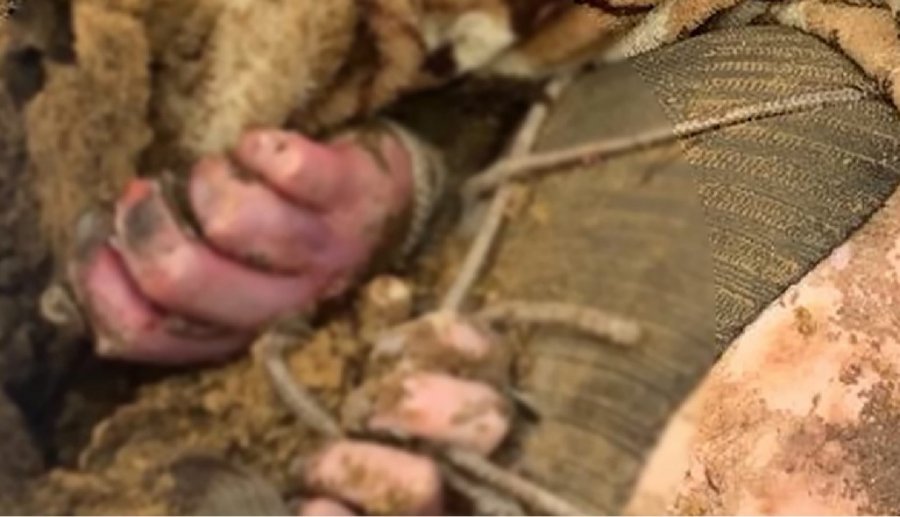 Grave of three tortured victims in a forest near Myrotske, Bucha raion From the police video

The savagely tortured bodies of three men have been discovered in a mass grave in the forest outside the village of Myrotske in the Kyiv oblast.  This is the latest discovery of atrocities since the Russian 64th motorised infantry brigade retreated from the area, and unlikely to be the last.

According to Andriy Niebytov, Head of the Kyiv Regional Police, a pit was found on 29 April in the Bucha raion, with the bodies of three men whom the Russian soldiers first tortured, and then killed.  He says that the victims were tortured for some time, with bullet wounds to their limbs, before finally being killed through shots in the ear.  The victims had their hands tied and were blindfolded, with one man also having a gag in his mouth.  The bodies are so disfigured that they could not be identified.  The police are in no doubt that the Russians were responsible, and believe they tried to conceal their crime by throwing the bodies into a pit and covering them with soil.

Investigators have so far examined the bodies of 1202 civilians killed by the Russians.  The victims include 23-year-old Karina Yershova whose family had fled to Bucha from occupied Donetsk eight years earlier.  Karina was tortured and raped, before being killed with a shot to the head.  Her body was hurled into the mass grave in the churchyard together with over 400 other victims, exhumed after the Russians retreated.

Russia has, predictably, denied that its soldiers were responsible for the rape, torture and violent killings. Such denials are refuted by satellite images showing that the bodies appeared after the Russians seized control of Bucha and other Kyiv oblast cities; forensic evidence and huge amounts of witness testimony. There is also photographic and video evidence showing the Russians later trying to sell or send the stolen goods they looted from people’s homes back to Russia.

On 29 April, the Bucha City Council announced that they, together with the Office of the Prosecutor General, are organizing free DNA tests for the relatives of those killed (or missing) from Bucha and the Bucha raion.  The report added that the DNA has been obtained of all those whose bodies were found between 24 February and 28 April.  The whereabouts remain unknown of many people, including journalist Denis Khyliuk who disappeared in the Kyiv oblast.

Evidence of war crimes was first reported by Ukrainian and western media, as soon as they were able to enter the area after Russia’s retreat, and the sites of many of the atrocities have been visited by international leaders.  On 25 April, the Office of the Prosecutor of the International Criminal Court (ICC) stated that it would participate in a joint investigation team on alleged core international crimes committed in Ukraine, initially set up on 25 March.  This is the first time that the Office of the ICC Prosecutor will be taking part in such a joint investigation team.  This is almost certainly not the only first for the ICC which initiated an active investigation into alleged international crimes on 2 March 2022, just eight days after Russia began its fully-fledged invasion and aggression against Ukraine.  This was after “the referral of the situation in Ukraine to the Prosecutor of the ICC by an unprecedented 39 States Parties”, with the Prosecutor Karim Khan having effectively invited countries to ask for such an investigation, saying that this would expedite matters.

Russia has not merely denied the crimes its soldiers committed in Bucha and other parts of the Kyiv oblast.  On 18 April, Russian leader Vladimir Putin positively ‘honoured’ the  64th motorised infantry brigade believed to be behind the horrific international crimes committed in the Kyiv oblast.  The presidential decree talks of “mass heroism and daring, tenacity and courage” in referring to men almost certainly responsible for rapes, torture, indiscriminate killings and looting.

On 28 April, Ukraine’s Prosecutor General identified 10 Russian soldiers by name and rank,  She said that the investigators have established that, during the occupation of Bucha, they took civilians hostage, holding them without food or water,  on their knees, with eyes blindfolded, and hands bound.  They beat and tortured them, trying to get information about the location of the Ukrainian Armed Forces and Territorial Defence, and used threats to kill them and mock executions.   These are, of course, only a small part of the bestial crimes committed, and the criminal investigation is ongoing.