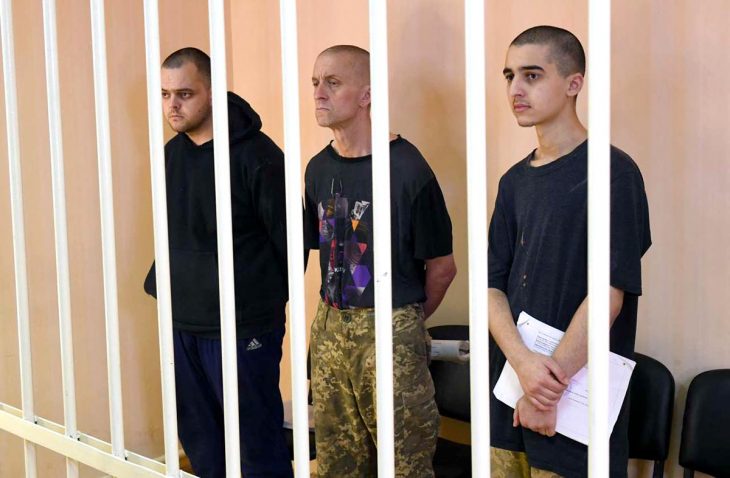 The European Court of Human Rights has ordered Russia to ensure that the death penalty imposed on a prisoner of war seized while serving in the Ukrainian Armed Forces is not carried out.  Although ECHR’s application of Rule 39 is with respect to Brahim Saadoun, a 21-year-old Moroccan national, Saadoun is one of three prisoners of war whom an unrecognized ‘court’ of the Russian proxy ‘Donetsk people’s republic’ [‘DPR]] ‘sentenced’ to death on 9 June 2022.  Like Sadoun, Britons Shaun Pinner (48) and Aiden Aslin (28) were serving in the Ukrainian Armed Forces and are undoubtedly prisoners of war protected under international law.

ECHR also ordered Russia to ensure that Saadoun’s rights under the European Convention on Human Rights are observed, in particular Article 2 (the right to life) and Article 3 (the prohibition of torture).  It is extremely likely that the conditions that the three men are being held in are, in themselves, tantamount to torture, and that they are also being ill-treated.  The Court also demanded that Russia provide information within two weeks to demonstrate “what actions and measures have been taken by their authorities” to ensure respect of Saadoun’s rights.

As reported, on 12 June Russian leader Vladimir Putin signed into force a law that flouts the decision of the ECHR Grand Chamber and backdates Russia’s rejection of the Court’s jurisdiction to 15 March.  Since Russia’s act is unilateral and breaches the Court’s decision from 22 March, the validity of that ‘law’ should surely be in question.  In addition, as ECHR stresses, the jurisdiction of the place where Saadoun is being held (namely, the so-called ‘Donetsk people’s republic’) is being considered by the Court within the framework of the inter-state case of Ukraine and the Netherlands v. Russia and Moscow remains obliged not to hinder Saadoun’s rights under Article 34 of the Convention.

Saadoun’s case has been taken up by the Ukrainian Helsinki Human Rights Union (UHHRU), with the application to ECHR sent by the UHHRU Centre for Strategic Litigation. Centre lawyer Anna Kozmenko explains that Saadoun came to Ukraine as a student of aerodynamics and space technology in 2019.  In October 2021, he applied to become a contract soldier in Ukraine’s Armed Forces, and began training in November that year.  Following Russia’s full-scale invasion on 24 February 2022, he was involved in defending Mariupol.

Contact with him was lost on 27 March, with no information available for a long time.  Then on 13 April, Russia stated that 1,026 Ukrainian soldiers from Saadoun’s brigade had surrendered to the Russians in Mariupol.  Saadoun, Aslin and Pinner were all shown by their captors on Russian television and on YouTube.  All of the men are falsely claimed to be mercenaries.  Saadoun explains that they were surrounded and without any food.  They first tried to break free, but did not succeed, and eventually were forced to surrender.

Since Russia has staged a farcical ‘trial’ in its puppet ‘DPR’ it is worth stressing that one of the videos shown with Saadoun was of his interrogation by Russia’s Investigative Committee.

On 30 April, there were reports in the media that the so-called ‘DPR prosecutor’ had initiated a supposed investigation with Saadun, Pinner and a person, shown on Russian television, identified as Andrew Hill, all accused of ‘forcibly seizing power or holding power’ and of supposedly being mercenaries (‘articles 323 and 430, respectively, of the unrecognized ‘republic’s unrecognized ‘criminal code’).  Later, the men were also charged under ‘article 232’ with ‘helping in the training of terrorist activities’.

It is not clear what has happened to Andrew Hill, but the ‘death sentences’ announced on 9 June by the pseudo ‘DPR supreme court’ were against Brahim Sadoun; Aiden Aslin and Shaun Pinner.

These are unrecognized structures, and bear no resemblance to real courts.

In theory, the men were provided with ‘lawyers’, however Dmitry Yershov, the Moscow lawyer, appointed for Saadoun, publicly lied, calling both the young Moroccan and Shaun Pinner ‘mercenaries’.  Worth noting that, in an interview to Lenta.ru, Yershov effectively gives the lie to his own words, by explaining that both Saadoun and Pinner entered into three-year contracts with Ukraine’s Armed Forces, making them regular soldiers, and in no way mercenaries.  Another ‘lawyer’, Olga Vesnina, who works in ‘DPR’, also used the same dubious methods in ‘representing’ Saadoun, claiming to the media that he was “a young idiot recruited by the British.”

Although there were at least five witnesses, willing to appear in Saadoun’s defence, not one of them was present at the ‘trial’.  This, purportedly, took place from 7 to 9 June, with all three men claimed to have ‘admitted the charges’.  It is next to impossible that any of them did this, save under duress, and Kozmenko notes that Saadoun has a bruise on his face.

According to international law, Bragim Saadoun; Shaun Pinner and Aiden Aslin are all prisoners of war who must not be prosecuted for serving in their capacity as soldiers or marines.  They were serving as regulars in the Ukrainian Armed Forces, on equal conditions as Ukrainian nationals, and were therefore certainly not mercenaries.

Russia has not only flouted such fundamental principles of international humanitarian law, but has allowed them to be ‘tried’ by an entity that has absolutely nothing in common with a court of law.