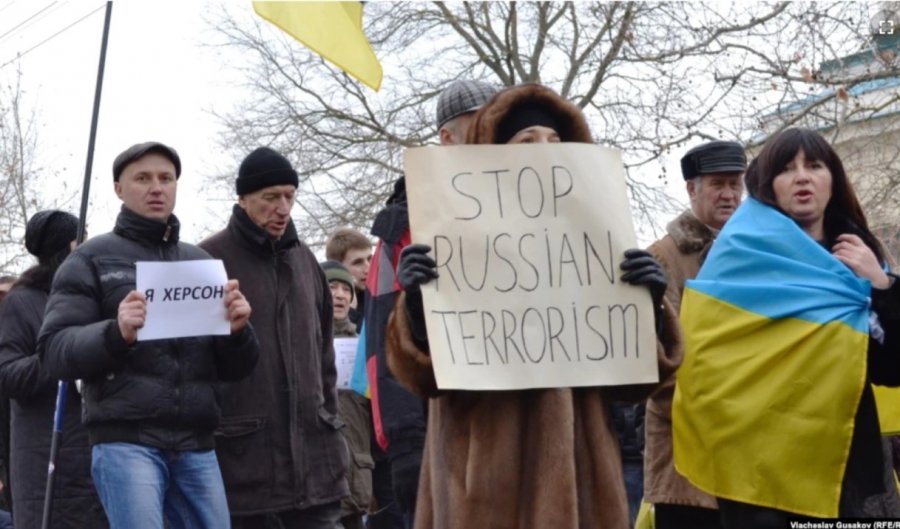 Kherson protest against Russian invasion. Such protests are one of the reasons why the Russian invaders actively abduct civic activists, journalists and local leaders Photo Viacheslav Gusakov, RFE/RL

Russia’s aggression against Ukraine began with its invasion of Crimea in 2014 and its total invasion of Ukraine in February 2022 would not have been possible without the use of this first illegally occupied territory as a military base.  This is only one of the reasons why the West’s failure to react more decisively eight years ago seems so bitterly frustrating.  Russia is now using the peninsula to imprison a large number of prisoners of war and civilian hostages, with all the methods used in flagrant violation of international law, but scarcely unexpected.

Tamila Tasheva, the President’s Representative on Crimea, reported on 15 May that she and her office receive information everyday about Ukrainians being taken to occupied Crimea from adjacent oblasts, including from Mariupol.

They have testimony from verified sources indicating that from the first days of Russia’s total invasion, one of the blocks in the Simferopol SIZO [remand prison] was set aside for holding prisoners of war [POW] and civilian hostages, brought by force from mainland Ukraine.  This SIZO is already holding a large number of Crimean Tatar and other Ukrainian political prisoners.

Soon Tasheva’s office began receiving reports that SIZO inmates had seen groups of people being brought in with bags over their heads, in handcuffs and in the custody of armed men in balaclavas.  These new prisoners are reportedly treated very roughly and with particular brutality.  They are forced to move about the SIZO with a bag over their head, or a cap pulled down to obscure their face, as well as bent over, with their hands held upwards in handcuffs.  Since they can’t see, they often trip and hurt themselves, but also get abuse, kicks and blows if there are these or other delays. Some of the witnesses have spoken of the new prisoners being in a poor physical state.

Tasheva says that most of the prisoners are civilians seized on territory that came under Russian occupation.

As reported, since Russia began its total invasion of Ukraine, at least four Crimean Tatars (Arsen Ibraimov; Rustem Gugurik; Rustem Osmanov and Nazrulla Seidaliev) have been arrested and imprisoned on surreal charges of involvement, while in mainland Ukraine, in the Noman Çelebicihan (or ‘Asker’) Battalion.  This body is perfectly legal in Ukraine and is not, despite the name, an armed formation.  Three of the men are permanently resident in the Kherson oblast, with Rustem Osmanov having actually been seized by the invading forces at his Kherson oblast home and then illegally taken to Crimea.  The men are all now held prisoner, but in the main part of the SIZO, as are many other political prisoners.

Ironically, two Mariupol residents are believed to have voluntarily tried to go to Crimea or, via Crimea to Moscow.  They were instead detailed and are now imprisoned in the SIZO.  One of the men is in the block, referred to as ‘the monastery’ and supposed to hold female inmates.  He confirmed the brutal treatment by ‘spetsnaz’ fighters, constant beating and the use against prisoners of electric shocks.

Another Kherson oblast hostage has reported that when they had their hair and / or beards cut, the SIZO staff deliberately ripped off hair or skin, and react to any delay or slowness with beatings or the use of electric shocks.  The witnesses report that you can actually see the prisoners’ terrible bruises, as well as the stressed state they are in.

One of the prisoners could be heard being tortured.  This was clearly to get him to sign something, with his torturers claiming that the others had signed it.  The man refused to do so, and may have been tortured again, as his cries were certainly heard.

Tasheva assumes that this is just the tip of the iceberg, and points out that Bucha, Borodyanka and other occupied cities have already demonstrated just what the Russians are capable of doing.

Predictably, Russian state media provide a quite different picture.  On 2 April, they all showed Tatyana Moskalkova, Russia’s Ombudsperson, ‘visiting Ukrainian prisoners of war’ in Crimea. The entire video was very clearly staged, with the viewers told about the POWs receiving three meals a day, walks in the fresh air,  and receiving everything needed, including medical care.

No mention at all was made of the very large number of civilian hostages abducted from places in mainland Ukraine under Russian occupation.  There are strong grounds, including the testimony mentioned by Tasheva, for suspecting that the ‘PoWs’, if that they were, were repeating what they had been forced to say.

It should be stressed that Russia is, in any case, in breach of the Geneva Convention relative to the treatment of prisoners of war which prohibits PoWs from being held in penitentiary institutions.  It is a grave violation of international law to target civilians, and this is what Russia has been doing since 2014, and especially since 24 February this year.  The Russian invading forces have abducted a very large number of civilian hostages as a weapon of terror and intimidation on recently-occupied territory and also as a banal ‘exchange fund’, to get Russian prisoners of war freed.