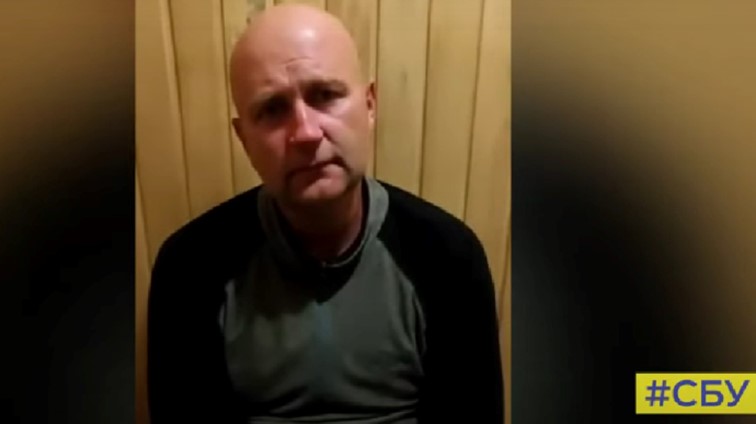 Andrei Fedorchukov from the SBU video

A Russian bomber pilot, brought down and captured over Svitlodarsk in Donetsk oblast, has admitted being employed by a so-called ‘private military company’ and receiving 205 thousand roubles (over 3,5 thousand euros) a month for carrying out bombing missions, with these clearly ordered by Russia’s defence ministry.  Andrei Vladimirovich Fedorchukov claims that his task was to hit Ukrainian military strongholds, but acknowledges that very Ukrainian civilians have been killed by Russian bombs.

The part of the interrogation posted by Ukraine’s Security Service [SBU] does not contain any questions or answers about money, however the details provided by the SBU correspond to those first reported by Yuri Butusov, a well-known Ukrainian military correspondent, who had clearly heard the full interrogation.

Asked what his unit is, Fedorchukov answers that he is from a ‘private military company’.  On the video, he claims to not know whether the ‘pmc’ in question is the notorious Wagner unit, and asserts that he received no papers.  Since both Butusov and the SBU assert that he admitted to being in the Wagner Unit, it seems likely that this came out separately, as did the information about money.

Although most is known about the Wagner Unit, because of its role in Russia’s invasion and occupation of Crimea, and in the first years of Russia’s attack on Donbas, there are other such ‘private military companies’.  In none of them would there be any grounds for seeing the term ‘private’ as being anything but a smoke screen.  It is officially a crime in Russia to be a mercenary, so the Kremlin and Russian defence ministry prefer to pretend that these ‘PMC’ have nothing to do with them.

In fact, both Dmitry Utkin (‘Wagner’), the commander of the unit carrying his name, and his deputy Andrei Troshev were guests of Russian leader Vladimir Putin at a Kremlin reception in December 2016 to mark ‘Heroes of the Fatherland’ day, and there is a huge amount of evidence linking them to Russia’s military ‘operations’ in Ukraine; Syria; Libya; the Central African Republic and other countries.  The men are generally far better paid than ordinary soldiers, with the payment formally coming from individuals like Yevgeny Prigozhin, the former criminal known as ‘Putin’s chef’ who has long been under western sanctions.  Under Putin, Prigozhin has made millions, and such expenses are believed to be the services he provides in return.  It has also been known for a long time, and is essentially confirmed by Fedorchukov, that such ‘PMC’ work closely with the Russian defence ministry.

It would be typical if, as Fedorchukov says, he was not given any formal papers, although it is certainly unlikely he would not know what the ‘PMC’ was.  He names his rank as major, and says he had only been carrying out these bombing raids from 14 June.  He had carried out around six or seven when shot down and taken prisoner.

Unsurprisingly, Fedorchukov repeats the official Moscow line, claiming that he was supposed to bomb Ukrainian military strongholds and areas where there were high numbers of Ukrainian defenders.

Details of Fedorchukov’s interrogation were first given by Yuri Butusov who said, as the SBU have since repeated, that the former major of the Russian Federation aerospace forces said that he was paid 205 thousand roubles (or just over 3,500 euros) a month for his activities in the ‘PMC’.

On the video, Fedorchukov claims to have only bombed military targets, but then goes on to say that he has seen images of what has been bombed, and acknowledges that many civilians have been killed.  He calls the war ‘wrong’ and claims to repent.  As Butusov notes, Fedorchukov’s main hope would be to become part of an exchange of prisoners.  He does, however, “understand that he is a mercenary and that he may not be put up for exchange and may suffer for his crimes.  Ukraine has particular grievances against Wagner Unit fighters who are up to their elbows in blood and are specialists in murdering civilians”.

Butusov mentions two important details.  The first is that “Russian aviation has big problems with GPS systems”.  He notes that Fedorchukov had a Garmin GPS with him and a smartphone with the program Pronebo so as to have better GPS than the navigating means on board the Russian aerospace plane.

“They don’t trust their own Glonass, and want to use the American [system]. It would be interesting to know how many Garmins are used by the Russian armed forces and whether the Americans can follow their movements.  That would be valuable information.”

“It’s also important that due to the large losses of military planes and helicoptors, the Russian armed forces have begun hiring pilots whom they’re already short of.”

Russia is already threatening death sentences against three foreign nationals, claiming them to be ‘mercenaries’, although the men: Brahim Saadoun from Morocco and Aiden Aslan and Shaun Pinner from the UK were all living in Ukraine and contract soldiers in Ukraine’s Armed Forces.  The hypocrisy is extraordinary given Russia’s use of Wagner Unit and other formations used to send highly-trained mercenaries to kill Ukrainians.   Russian propaganda recently claimed that  Svitlodarsk had been ‘liberated’ and that the population are ‘happy’ about this, while stating openly that the city had been captured by members of the Wagner Unit.  The lack of mention of money does not change the fact that these are mercenaries who go wherever the money is good.