Teachers in occupied Kherson refuse to collaborate with Russian occupiers Russia uses terror and abduction in attempt to force schools to collaborate in occupied Melitopol Mayor of Melitopol Ivan Fedorov abducted after refusing to collaborate with the Russian invaders Russian priest arrested and prosecuted for sermon opposing Russia’s war against Ukraine Russia effectively admits it deliberately bombed the maternity hospital in Mariupol that killed three patients, including a childRussia brings grotesque propaganda to Berdiansk after Ukrainian journalists refuse to collaborate Russian invaders murder Ukrainian volunteers Impassioned appeal from Ukrainian Muslim leader in face of Russia’s war to destroy Ukraine Russia is forcing Ukrainians from occupied Crimea and Donbas to fight in its invasion of Ukraine Children among the dead after Russian invaders opened fire on fleeing civilians Russia installs its propaganda TV after seizing Kherson and imposes 15-year sentences for reporting its invasion of UkraineUkrainian survivors of the Holocaust demand Putin and Russia get out of Ukraine Russia continues its carnage, flouting binding order from ECHR to stop bombing civilians in UkraineBabyn Yar bombed by Russia, 80 years after Nazi Massacre of Ukrainian Jews Russia proposes 15-year sentences and threatens "treason charges" for telling the truth about its war crimes in UkraineRussian schoolchildren told that Russia is bombing and killing Ukrainian children in ‘self-defence’ Putin miscalculated. Russia is fighting “an army of 40 million Ukrainians” Chief Rabbi of Ukraine demolishes Putin’s excuse for Russia’s invasion Russia bombs a Ukrainian kindergarten and apartments in its war against independent Ukraine Putin will continue attacking until Russia is stopped. Help Ukraine defend its freedom today!
• Topics / Children’s rights
• Topics / War crimes

Russia moves to eradicate Ukraine from schools in occupied Mariupol, Kherson and Zaporizhzhia 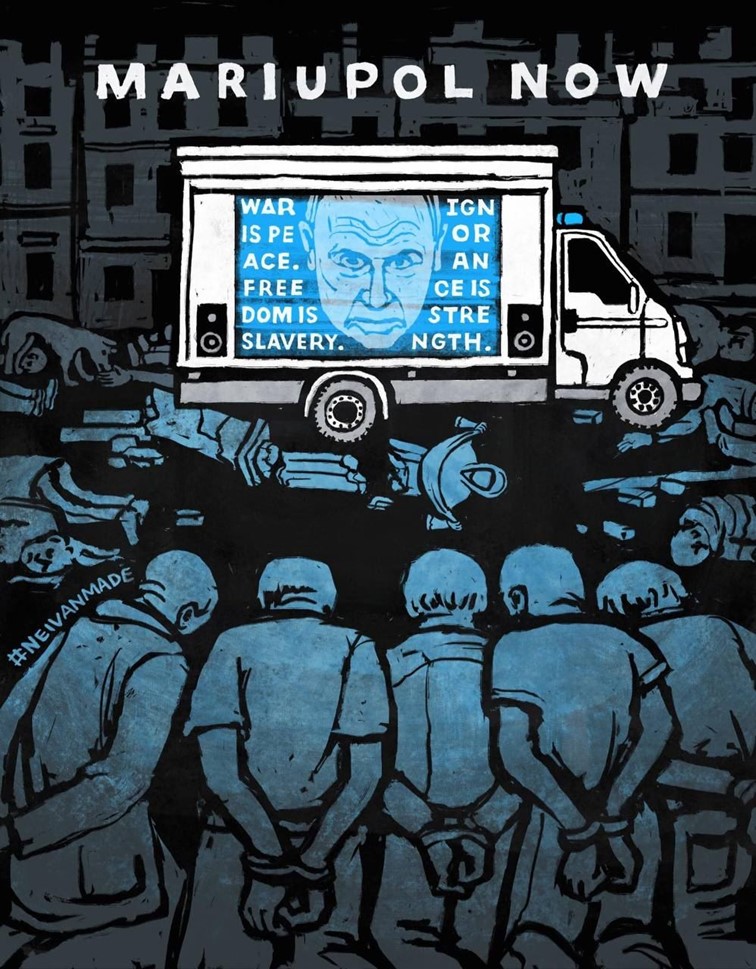 Crimea SOS has reported that lists of Crimean teachers have been drawn up for ‘work trips’ to the parts of the Kherson and Zaporizhzhia oblasts currently under Russian occupation.  Russia is eager to instil so-called ‘Russian standards’, including Russia’s lies about its war against Ukraine, and is having difficulty finding local teachers willing to collaborate with them.

According to Yevhen Yaroshenko from Crimea SOS, school heads in occupied Crimea had been ordered to draw up lists of teachers by 1 July, almost certainly in order to send them to work in areas of the Kherson and Zaporizhzhia oblasts, seized by the Russians over recent months. The heads are also asked to point out candidates for the post of school heads.  Crimea SOS sources inform that employees from the occupation education department in Simferopol have been asked to provide information about educational workers willing to teach in newly seized parts of Ukraine.

There were reports in the second half of June that teachers and students training to be teachers in regions of Russia were also being recruited for so-called ‘work trips’ to the Kherson and Zaporizhzhia oblasts.  Both Verstka and Radio Svoboda (RFE/RL) reported that information had appeared about such recruitment in teachers’ and students’ online chats in several Russian regions.  Taiga,info, for example, stated that it had found such announcements on chats at the Novosibirsk state pedagogical university.  According to the chat messages, this was an initiative from the Novosibirsk oblast education ministry, and teachers would be paid seven thousand roubles a day, as well as accommodation and transport.  The contracts were supposed to be for three months.  That particular outlet published an update from the authorities stating that the information about students was no longer ‘current’.  There were similar advertisements on chats in the Nizhegorod oblast.

According to the daughter of a Russian teacher from Ufa, teachers were being offered 8 thousand roubles a day to work in the Russian proxy ‘Donetsk and Luhansk people’s republics’ [‘occupied Donbas].

One of the educational workers that Verska spoke with said that, as far as he knew, there were no takers for such ‘offers’.

Russia’s education minister, Sergei Kravtsov announced on 26 June that in the areas of Ukraine that  he claimed the Russian invaders have ‘liberated’, schoolkids would be taught according to ‘Russian standards’ from 1 September.

This representative of a country that has destroyed a huge number of schools and hospitals, as well as causing total devastation to Mariupol and some other cities, mentioned only the procurement of (Russian) textbooks.  He literally asserted the following: “We are well aware how the Ukrainian regime used school children, incited national enmity, aggression and created fake history.  Today we face a lot of work in order to show schoolchildren the entire truth, based on historical facts, documents.”

In Mariupol, where the Russians destroyed around 90% of the infrastructure, and are unable to reinstate running water and sewage, they are concentrating on propaganda measures, including huge screens repeating Moscow’s claims about the war and ensuring indoctrination of Ukrainian schoolchildren.

On 4 June, Petro Andriushchenko, Adviser to the Mayor of Mariupol, reported that the invaders are “continuing to destroy the self-identification of children in Mariupol.”  He mentioned that five thousand textbooks had been brought in for the planned opening of School No. 4.  “Russian language, Russian literature, Russian history, nature of one’s own country (Russian) for elementary and secondary school.”

While the Ukrainian textbooks sent to occupied Donbas may not be used, the intelligent blackboards paid for by Mariupol taxpayers certainly will, and this was one of the numerous cases where the invaders are plundering occupied territory.

Andriushchenko reported on 26 May that the Russian invaders had extended the school year until 1 September – for ‘de-Ukrainization’ and to prepare for using the Russian syllabus. He said that they were planning to open 9 schools, although they had only found 53 teachers willing to work in them.

As of 2 July, Andriushchenko  has learned that all Mariupol teachers are being sent to Russia ‘for certification’.

“Without certification as to knowledge of russia’s made-up history and russian propaganda, you won’t be able to work from September.  The eradication of Ukraine is the russians’ permanent objective in force.”

Andriushchenko added that there is an unofficial ban on educational workers leaving Mariupol. “The lack of staff wishing to take part in stealing children’s future is playing its role”.

At the end of May, the Russian-installed head of Crimea, Sergei Aksyonov, claimed that 20 thousand teachers from occupied parts of Kherson and Zaporizhzhia oblasts would be sent to occupied Crimea to ‘increase their qualifications’, i.e. to get them to teach according to ‘Russian standards’.

In fact, this, like other grandiose assertions, ran up against a major hurdle.  Thus far there have been very few teachers in other oblasts willing to collaborate with the invaders.

Over a thousand schools ended up in occupied territory following Russia’s full-scale invasion.  Although Russia’s relentless bombing and shelling of whole oblasts has led to a situation where a huge number of school-age children are now in other parts of Ukraine or abroad, the situation with education is critical.  Ukraine did allow the regional military administrations to close schools for the interim, if there were problems, either with safety, or with the staff being forced to collaborate.  Where possible they go over to online teaching, and, in all cases, teachers retain their position and should receive at least two-thirds of their pay.

Both for parents, and for teachers, in areas currently under occupation, the situation is extremely difficult.  A Guardian reporter spoke with teachers who had been told that they must either resign or sign a document expressing willingness to teach according to the Russian curriculum by 21 July.  Some of the sources said that they had been threatened with eviction if they refuse to collaborate.  While many or most may not wish to collaborate, they are also aware that this could lead to criminal charges once the Russians are driven out.  People are, however, living in conditions where refusal to cooperate can and has, in several cases, led to the abduction of educational workers, or other retaliation.

Russia has spent vast amounts of money on propaganda in occupied Crimea and Donbas, and is clearly planning the same methods in any areas that come under its control.  The danger this imposes cannot be overstated.