Russia instals FSB man, other Russians to ‘govern’ occupied Kherson where the population hates them 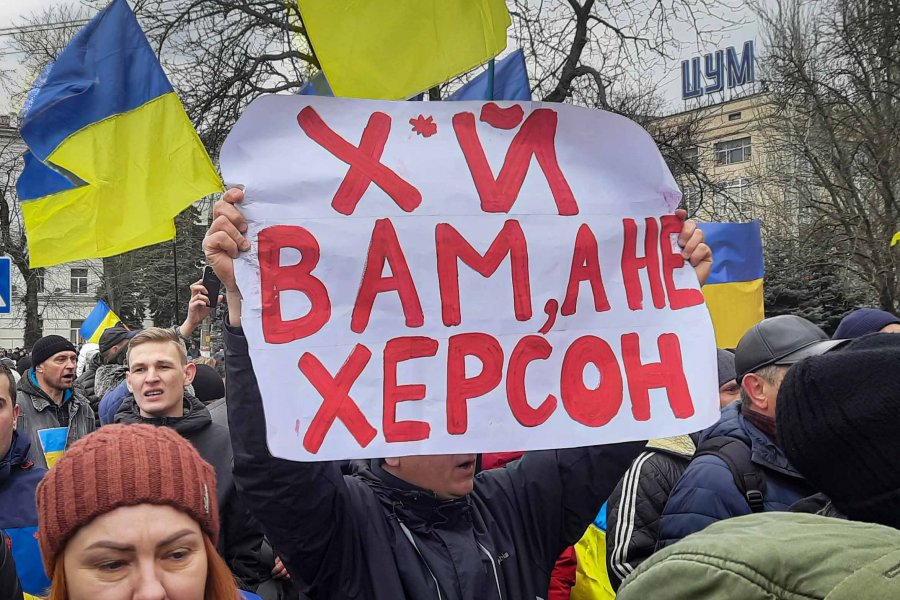 Kherson demonstration against the invaders. The banner reads ’F**k you and not Kherson’ Photo VHoru

Moscow has clearly despaired of finding enough local collaborators to ‘govern’ the  parts of the Kherson oblast currently under its occupation, and has brought in its own.  This puppet ‘government’ is now headed by a ‘former’ officer of Russia’s FSB, or security service, although Russia clearly prefers to not broadcast his FSB origins.

The changes were made after the second visit to Kherson oblast of Sergei Kiriyenko, deputy chief of staff of Vladimir Putin’s presidential administration.  Kiriyenko, who is under multiple western sanctions, is evidently the person now ‘in charge’ of Russia’s pseudo ‘republics’ in Donbas and of other areas under Russian occupation.

This is not, of course, how the changes were announced by the Russian media.  Instead, the first collaborator, Volodymyr Saldo, whom Russia earlier pronounced ‘head of the Kherson civic military administration’, claimed that “a permanent government has been formed in the Kherson oblast from local residents and Russian specialists”.   They had, purportedly, “decided to find the best personnel, not only among residents of the Kherson oblast, but also among Russian professionals and government officials”.  In fact, four members of this ‘government’ have been named, with only one of them from the Kherson oblast, namely MP Oleksiy Kovalyov, a former member of the majority ‘Servant of the people’ party whose only ‘qualification’ for the post would appear to be his willingness to collaborate with the occupiers.   The other three are Russians.

Sergey Yeliseyev is identified in all Russian or pro-Russian publications as the former deputy head of the Kaliningrad oblast government, with very few mentioning Yeliseyev’s links with the FSB.  The Centre for Journalist Investigations [CJI] reports what the Russian propaganda sources prefer to remain silent about, namely that Yeliseyev served from 1993 to 2005 in the Russian FSB and graduated from the elite FSB Academy in 1998.  The latter is probably one of the reasons why CIJ suggests that Yeliseyev’s work in commercial organizations from 2005 until 2014 was a work assignment from the FSB.  He has also received several state awards, for unidentified ‘service’ to the state, as well as ‘for courage’.  These seem unexpected for a person working in the private sector, or from August 2014, holding posts in regional government, first in Vologda, then, from 2017, in the Kaliningrad oblast.

Yeliseyev is to have two deputies – Ukrainian collaborator Kovalyov and Russian Vladimir Bespalov, who is a former deputy ministry of municipal development in the Kaliningrad oblast.

The Russian media are also reticent about another Russian ‘government’ appointee, Mikhail Rodikov.  Perhaps he was once the deputy head of a local administration in the Moscow region, but his services to the Kremlin lie elsewhere.  CIJ explains that Rodikov was deployed from 2015-18 in ‘adapting’ the educational system in occupied Sevastopol to Russia’s.  A very major part of Russia’s drive in occupied Crimea has been on indoctrination and propaganda, especially among the very young.  The Russian invaders have long been trying to impose so-called ‘Russian standards’ on schools in occupied parts of the Kherson and Zaporizhzhia oblasts, and have come up against considerable resistance from teachers and parents.

Yuri Sobolievsky, Deputy Head of the Kherson Regional Council, told Suspilne that the move to form a new ‘government’ was predictable, as the Russians are disillusioned with the collaborators and their questionable competence.  He points out, however, that this new, so-called, ‘government’ will be just as ineffective “because it’s not possible to do anything when the population does not support what you’re doing.  They will try to present some kind of results, speed up integration of the Kherson oblast into the Russian Federation system since we can see that there is effectively an attempt underway to annex the territory”.

He adds that the role of collaborators, like Volodymyr Saldo and Oleksiy Kovalyov, is to try to create a propaganda image of support for Russia in the Kherson oblast. You can easily assess how pushed they are to find people by the lack of experience of the individuals they are installing in bodies of local self-government.

Kherson political analyst Volodymyr Molchanov agrees that the ability of any of these individuals to organize anything is in doubt since they have never before encountered a situation where the reasons of the oblast cordially hate them and the Russian aggressor state. 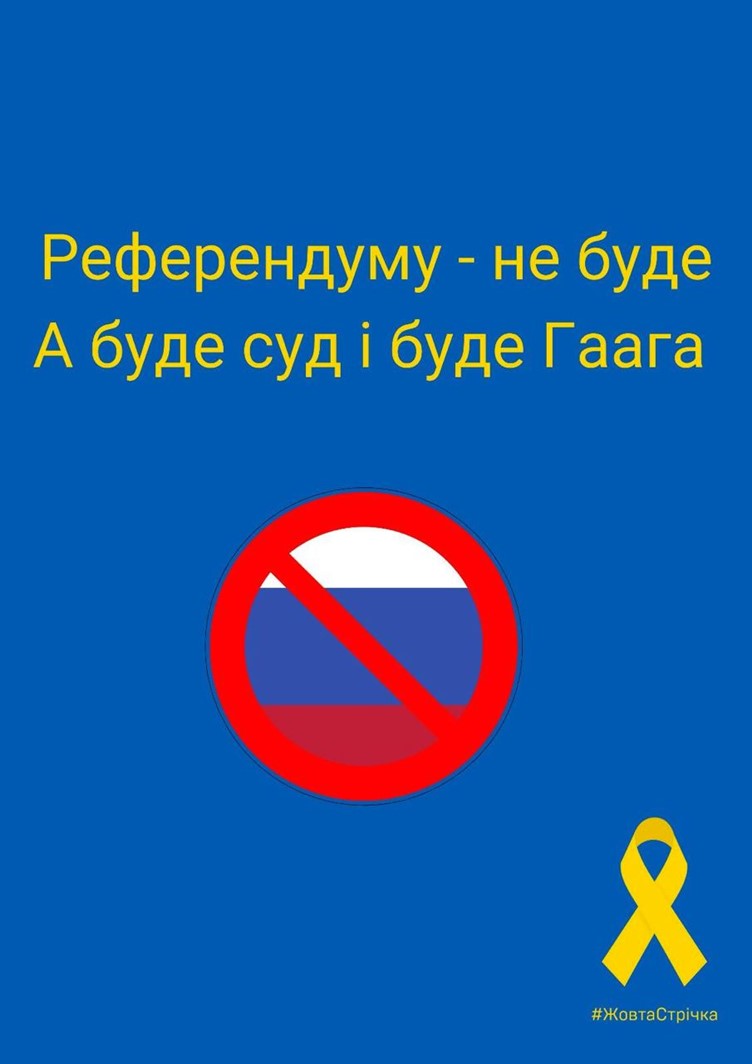 Russia does still appear to be planning to try to state a so-called ‘referendum’ on 11 September, aimed at trying to give some kind of ‘legitimacy’ to its invasion and occupation of the Kherson oblast.  This may well be the reason that the Russians  abducted Kherson Mayor, Ihor Kolykhaev, on 28 June after he refused to collaborate and are generally instilling terror in the oblast.

Abductions and violence against peaceful demonstrators have meant that resistance to the invaders has been forced underground.  As well as threats against collaborators, with at least two already killed, Ukrainians have initiated various other forms of protest.  The most recent, ‘the Yellow Ribbon’ movement, is specifically aimed at opposing Russian plans to fake a referendum.  One of the placards reads “There will be no referendum, only a trial and the Hague”, with the Russian flag crossed out against a blue background, with a yellow ribbon, and the words “Yellow is the colour of freedom”.

The organizers write that they know how the rashists are planning a referendum, what resources they want to use and that “we know with certainty that nothing will come of it.  The ‘Yellow Ribbon’ movement is preparing many nice surprises for the rashists.”