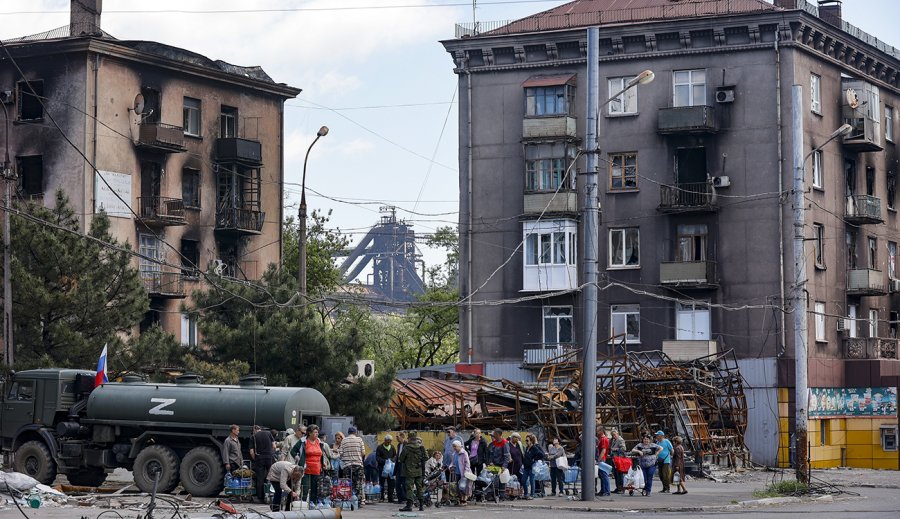 A large crowd of Mariupol residents held a protest in the Volonterivka micro-district on 8 July demanding that the Russian occupiers urgently provide drinking water, electricity and transport.  The protest was triggered by the death, in the middle of the road, of two elderly people who had been forced, in heatwave conditions, to try to walk many kilometres from Volonterivka to the district centre.  Some 3,000 residents of Volonterivka, and at least 200 children, have been left cut off from all services.

Petro Andriushchenko, Adviser to the Mayor of Mariupol, who is clearly receiving information and photos from people in the city, says that the occupation ‘authorities’ first tried to appease the protesters, but then simply fled, under the protection of Russians with machine guns.

Andriushchenko points out that Russia is exacerbating the problems it already caused by holding all of the men from the area in so-called ‘filtration camps’.  The men could have at least tried to resolve the problems themselves.

Later on 8 July, Andriushchenko reported that the Russian occupiers had totally stopped any provision of water to Mariupol.  He dismissed the official claim that this was due to repair work, and said that the electricity network could not cope with the heatwave.  It was not possible to get even one water pump working, with the power going.  All of this was completely predictable, and the Mariupol authorities had even warned the invaders and told them what was needed.  The advice was ignored.

The following day, Andriushchenko posted a video showing the occupiers’ reaction to the protest and publicity about the water situation.  They purportedly ‘provided water’, but this ended up in muddy pools on the street, rather than in people’s taps.  Russia devastated the city’s infrastructure through its systematic bombing and shelling, and kilometres of water pipes now need to be replaced.  The occupiers are, instead, using primitive water hose clamps, with the result here equally predictable.

A few days earlier, the Mariupol city authorities also posted a video showing people in huge queues for water.  People reportedly receive five litres of water for an entire week, with this in intense summer heat.  In order to get the water, they have to queue up at the water points from early morning.  It is hardly surprising that elderly people would not survive the journey to obtain water, and it is frighteningly likely that others are simply too weak to even attempt it.

The Mariupol authorities point out that proper drinking water is one of the most acute problems at the moment in occupied Mariupol.  People are forced to collect water from drainage wells or simply puddles.  This is especially dangerous now given the rubbish lying about and the number of shallow graves that residents were forced to make for those killed by the air strikes and shelling, or who died from the horrific conditions while the city was under Russian siege.  Add to this, the fact that the Russians have taken away, often imprisoning, the remaining medical personnel, and the consequences of such unsanitary water, and shortage of proper drinking water may well prove fatal.  The invaders, Mariupol Mayor Vadym Boichenko says, have caused a situation where, in the centre of Europe, water has become pure gold.

It is likely that the situation is similar in Severodonetsk and Lysychansk in the Luhansk oblast, both of which Russia has almost destroyed.

None of the problems are new, but their solution is clearly of less concern to the Russian invaders than changing road signs into Russian and ensuring huge screens to enable propaganda channels to be loudly broadcast amid the ruins,

The calculation is presumably that propaganda and terror can be used to enable Russia to rewrite the history and blame Ukrainian soldiers for the devastation.  There have already been propaganda stunts, with this clearly one of the reasons why Russia began forcibly taking Mariupol residents to Russia, while blocking all evacuation to other parts of Ukraine.  In one FSB-produced video, a young woman almost certainly speaking under duress, claimed that Ukrainian soldiers destroyed the Drama Theatre, hit and destroyed by a Russian air strike, despite the clear warning that children, together with women and the elderly, were seeking refuge there.

Andriushchenko reported on 9 July that the invaders have also resumed exhumations of bodies buries in courtyards of apartment blocks. It appears that the exhumations are now being carried out by Russia’s Investigative Committee.  These ‘investigators’ or simply the armed military question residents about how the people were killed. There is, Andriushchenko adds, a very clear ‘hint’ from these men brandishing machine guns that the answer they want is that the people were purportedly killed by the Ukrainian Army.  “Fabrication of fake evidence is on the march”, Andriushchenko says, “The one question is what for?  To prove to mindless Russians that they are not killers?”

This is, unfortunately, precisely what Russia is trying to do, and not only at home. It has spent vast amounts of money on indoctrinating people in occupied Crimea and the proxy Russian ‘Donetsk and Luhansk people’s republics’.  It will certainly try the same methods in any other part of Ukraine that falls under its control, whatever the devastation and suffering it has caused.