Russian Prosecutor General given power to close media for ‘discrediting the army’ through truth about the war against UkraineYoung Crimean Tatar likely tortured into ‘confessing’ to anti-war protest Imprisoned in occupied Crimea for opposing Russia’s war against Ukraine Ukrainian seized and sentenced in Russian-occupied Crimea for pro-Ukrainian social media commentsArtist disappears after arrest for pro-Ukrainian anti-war protest in Russian occupied Crimea Crimean teacher dismissed and threatened with prosecution for telling students the truth about Russia’s war against UkraineRussia installs its propaganda TV after seizing Kherson and imposes 15-year sentences for reporting its invasion of UkraineUkrainian survivors of the Holocaust demand Putin and Russia get out of Ukraine Russia continues its carnage, flouting binding order from ECHR to stop bombing civilians in UkraineBabyn Yar bombed by Russia, 80 years after Nazi Massacre of Ukrainian Jews Russia proposes 15-year sentences and threatens 'treason charges' for telling the truth about its war crimes in UkraineRussian schoolchildren told that Russia is bombing and killing Ukrainian children in ‘self-defence’ Putin miscalculated. Russia is fighting “an army of 40 million Ukrainians” Chief Rabbi of Ukraine demolishes Putin’s excuse for Russia’s invasion Russia bombs a Ukrainian kindergarten and apartments in its war against independent Ukraine Putin will continue attacking until Russia is stopped. Help Ukraine defend its freedom today!Russian Rule of Lawlessness in Occupied Crimea and DonbasPoetry and Flowers Against the War – Digest of Russian ProtestsCrimean lecturer faces 5-year sentence for writing about Russia’s killing of innocent civilians in Ukraine Spontaneous Memorial on Ukrainsky Boulevard – Digest of Russian Protests
• Topics / News from the CIS countries 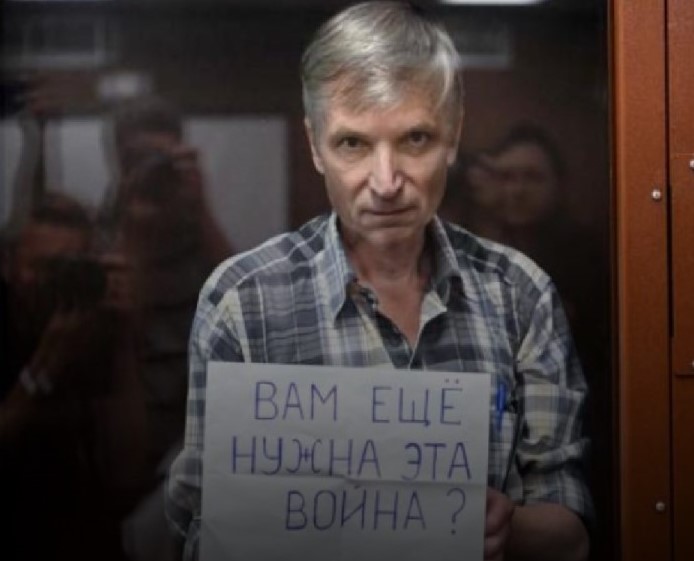 Alexei Gorinov in court with a sign asking ’Do you still need this war?’ (which a court guard tried to hide) Photo AFP

Alexei Gorinov has become the first Russian to receive a long prison sentence for telling the truth about Russia’s full-scale invasion of Ukraine.  As one fearless Russian commentator has pointed out, the charge (and the 7-year sentence) is a direct replica of the notorious article of the Soviet criminal code on ‘anti-Soviet propaganda and agitation used to imprison dissidents who dared to tell the truth about the USSR.

Just ten days after Russia began its total invasion of Ukraine, a new draconian law had come into force imposing both administrative and criminal liability for effectively expressing opposition to the war.  The new Article 207.3 of the Russian criminal code envisages long sentences for what is referred to as the “public circulation of knowingly false information about the RF armed forces” and “public acts aimed at discrediting the use of the RF armed forces for the purpose of defending the interests of the RF and its citizens, support of international peace and security”

As of 9 July, 68 such criminal prosecutions were under investigation, with some of these having already reached the courts.  In the cases that have become public, it is clear that the people have been arrested for expressing opposition to the war and / or reporting truthful information about atrocities, for example in Bucha,

On 8 July, 61-year-old Gorinov was sentenced to seven years’ imprisonment under Article 207.3 for criticizing Russia’s invasion of Ukraine. This incredible sentence was demanded by the prosecutor and meekly passed by ‘judge’ Olesya Mendeleyeva from the Meshchansky District Court.  It is, to date, the first real sentence to be passed under this new law, and is very obviously being used as a chilling warning to others of what they face for speaking out against Russia’s invasion and for exposing the lies about the war.

According to veteran Russian human rights defender Lev Ponomaryov, Gorinov is a lawyer, who was in charge of the legal department of a commercial organization.  He could, in short, have sat back, enjoying his position and the material comforts it allowed him.  Or could have, had he not been driven by what Ponomaryov describes as “an acute sense of injustice and empathy”.   He became an active human rights defender and often helped to defend people detained and prosecuted for peaceful protest.  He appears to have been driven by the same motives when, in 2017, he became a member of the Krasnoselsky District Council in Moscow (from the opposition Solidarity Party).

Russia has many methods for crushing peaceful protest, and Gorinov was apparently briefly jailed in an administrative prosecution for a protest against Russia’s invasion on 24 February.

The comments that formed the basis of his criminal prosecution were spoken on 15 March at a meeting of the council which was taped and posted on YouTube. Gorinov was rapporteur on plans for leisure activities, including a children’s picture competition, in the second quarter of the year.  He recommended rejecting the proposal, saying as follows:

“What kind of leisure and entertainment can there be when we are now in a qualitatively different way of life, when military action is being carried out on the territory of a neighbouring sovereign state, and our country is carrying out aggression? Just tell me, please, what kind of children’s picture competition there can be and what organizing of dance programs to mark Victory Day when children are being killed every day? Just for information, I would say that around one hundred children have been killed in Ukraine and children are being orphaned. The grandchildren and great-grandchildren of veterans of the Second World War have now been flung into the hell of this military action on Ukraine’s territory. I think that all the efforts of civil society should be directed solely at stopping the war and at withdrawing Russian forces from Ukrainian territory”.

Gorinov rightly says shortly afterwards that he is expressing his view, and it would indeed be hard in a real court to find specific parts of the above that are “knowingly false”.  It would, however, be equally difficult to call either Article 207.3, or Gorinov’s ‘trial’, real when ‘knowingly false’ means only that the words in question are not in line with the official defence ministry narrative.  Since the latter is continuing to claim, against all evidence, that Russia is only hitting military targets, any other statement, however strongly backed by evidence and any criticism will be classified as ‘knowingly false’ or ‘discrediting the Russian armed forces’.

It was Lev Shlosberg, back in August 2014, who first provided evidence of Russian military involvement and losses in the war in Ukraine, and he remains as fearless now.  He calls Alexei Gorinov’s 7-year sentence “a direct replica from Article 70 of the Russian SSR’s 1960 criminal code on ‘anti-Soviet agitation and propaganda’.

“Agitation or propaganda, carried out in order to undermine or weaken the Soviet regime or carry out particular especially dangerous state crimes, the circulation for these purposes of slanderous fabrications, discrediting the Soviet state and public order, as well as the circulation or preparation or possession for these purposes of literature of the same content” is punishable by imprisonment for up to seven years.  ‘Repeat offenders’, i.e. those twice charged with such ‘anti-Soviet propaganda’ for a Samizdat publication, a courageous remark, etc., could expect up to ten years.

Shlosberg writes that “The 2022 precedent has been created. However the boomerang, thrown into the past, will return.”

In his final address to the ‘court’ on 7 July, Gorinov spoke of the lessons that he had always believed that the past had given them,  and his conviction that “war is the swiftest method of dehumanization when the line between good and evil is blurred.”

“Yet our present – is Bucha, Irpin, Hostomel.  Do the names of these cities mean anything to you?  Look them up, those who don’t yet know what happened there and don’t claim later that you didn’t know anything.

For five months, Russia has been waging military action on the territory of a neighbouring state while timidly calling it ‘a special military operation’.

We are promised victory and glory. Why then do so many of my compatriots feel shame and guilt?  Why have many left Russia and are continuing to leave?  And why has our country suddenly gained so many enemies?

Maybe something here is not right?  Let’s think about it!  Give us the chance to at least discuss what is happening, and share views.  That, after all, is our constitutional right!”

It is also, in fact, all that he did, and was, he says, supported by most of those present, yet now he is on trial.

This, he adds, would seem to be yet another unlearned lesson from the past about persecution for ones words, fabricated trials and claims later that “we didn’t know”.

The present regime is certainly blocking all websites that tell the truth and ferociously persecuting those who speak out, however the information is there for those willing to find it, and history should also find no extenuating circumstances for those who choose not to know.