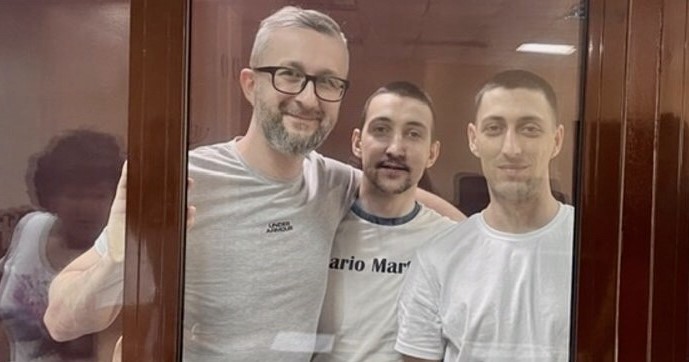 The ‘prosecutor’ in Russia’s political show trial of Nariman Dzhelyal has demanded 15-year sentences against the renowned human rights activist and Crimean Tatar Mejlis leader, as well as against civic journalist Asan Akhtemov and his cousin, Aziz Akhtemov.  ‘Prosecutor’ Roman Lobov claimed that the men’s ‘guilt’ had been proven, although there is no material evidence even of an act of sabotage, let alone of the men’s involvement.  The charges, and alleged ‘sabotage’, are based solely on ‘confessions’ tortured out of the two cousins while they were prevented from seeing independent lawyers, and on the supposed ‘testimony’ of three entirely secret ‘witnesses’.

The ‘trial’ has been taking place at the Russian-controlled ‘Crimean High Court’, which has already passed intentionally condemned sentences against other Ukrainians, including Dzhelyal’s Mejlis colleague Akhtem Chiygoz.  On 17 August, Lobov began the final ‘debate’ by asking the ‘court’ to pass 15-year sentences against all three men, with the first three years to be spent in a prison, the very worst of Russia’s penal institutions. He also demanded a steep 600 thousand rouble fine to be imposed on each of the men, although no proof has ever been provided of any actual damage from the alleged sabotage to a gas pipe at Perevalne in occupied Crimea.  A further 105 thousand roubles in the form of 35 thousand roubles from each man has been demanded from the Crimean Gas Network company which is claimed to be the aggrieved party in this unproven crime.

Nariman’s wife, Leviza Dzhelyalova pointed out that Lobov had effectively just repeated the indictment.  He did not cite any actual evidence, nor the testimony of the men themselves who stated clearly that any ‘confessions’ had been obtained through torture.  In fact, as Nikolai Polozov, one of Dzhelyal’s lawyers, notes, there is literally no material evidence in this case, no video footage, no DNA or similar.  There are only three ‘secret witnesses’ whose ‘testimony’ cannot be checked, and who may have never set eyes on the defendants.  There are also ‘confessions’ made by men who were illegally held prisoner without access to the lawyers of their choice and who immediately retracted these when finally, after the intervention of the European Court of Human Rights, given such access.

Nariman Dzhelyal, as First Deputy Head of the Mejlis, or self-governing body, of the Crimean Tatar people, was the only prominent Mejlis leader whom Russia had not persecuted and banned from entering their homeland.  There had long been concern that he too would face political persecution, especially after he took part in the international Crimea Platform inaugural meeting in Kyiv on 23 August 2021, meeting with high-ranking representatives of 45 countries and openly speaking of the repression under Russian occupation.  He was arrested just 10 days later, with the timing suggesting that Russia’s FSB saw no need to conceal that this was revenge.

It is telling that the alleged act of sabotage coincided with the Crimea Platform meeting, and that the report on that day suggested, at most, suspected vandalism. Sabotage is aimed at causing serious damage, or instilling terror.  Here, however, any damage was caused to a gas pipe that was not on any central circuit and could be easily fixed.  It also took place in a summer month when a cut to gas supplies is likely to cause minimal inconvenience.

Perhaps this is not something that the ‘court’ can be expected to consider, however the three ‘judges’ in this case:  Viktor Ivanovich Zinkov (presiding); Aleksei Viktorovich Kozyrev and Sergei Nikolaevich Pogregniak  have actively prevented the defence from demonstrating major flaws in the prosecution’s case and look set to ignore the compelling evidence that the Akhtemovs and two other Crimean Tatars abducted at the same time were tortured into ‘confessing’.  The Akhtemovs described the electric shocks they were subjected to, the beatings and mock executions, as well as the direct threats to the young men’s families.  Both the other two men, although called by the prosecution, have also made it clear that any ‘testimony’ given earlier was obtained through duress,

The most shocking indication of collaboration between prosecution and the ‘judges’ has, however, been seen in the fact that the only ‘testimony’ that has not been retracted comes from three ‘secret witnesses’. No convincing grounds were ever provided for keeping these alleged witnesses’ identity secret, and the ‘court’ has actively obstructed all questions from the defence aimed at demonstrating that the men were lying.

The next hearing is scheduled for 24 August.