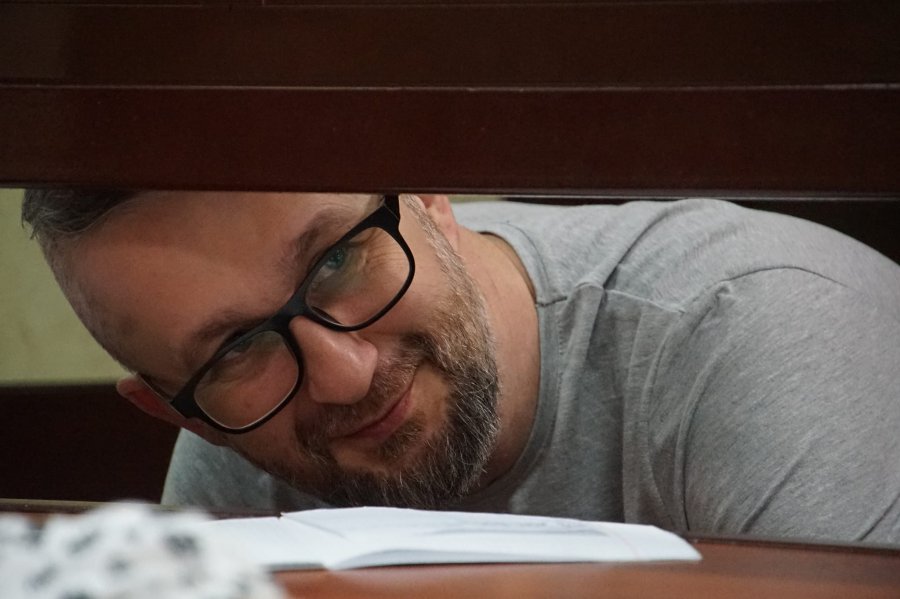 The internationally condemned ‘trial’ of Nariman Dzhelyal, renowned human rights defender, journalist and Deputy Chair of the Crimean Tatar Mejlis, is drawing to its almost certainly predetermined conclusion.  Russia’s FSB never made any attempt to lend credibility to the ‘sabotage’ charges laid against Dzhelyal, civic journalist Asan Akhtemov and his cousin, Aziz Akhtemov.  They presumed that the Russian-controlled ‘judges’ could be relied upon to not ask inconvenient questions about ‘evidence’ that bears no scrutiny, and there has been nothing so far to suggest that they were wrong.  The three ‘judges’ from the Russian-controlled ‘High Court’ in Crimea: Viktor Ivanovich Zinkov (presiding); Aleksei Viktorovich Kozyrev and Sergei Nikolaevich Pogregniak  have actively prevented the defence from demonstrating major flaws in the ‘evidence’ and demonstrate no interest in issues of clear importance. During questioning in court last week, Dzhelyal asked why he was forced to ask questions that the court should be putting.  Presiding ‘judge’ Zinikov’s only response was to tell Dzhelyal he was not allowed to put questions to the court.

Nariman Dzelyal’s arrest just days after he took part in the inaugural meeting of the international Crimea Platform, together with the leaders of 45 countries, was widely recognized as an act of revenge.  The virtually open methods used of fabricating ‘evidence’ may well have been aimed at ostentatiously demonstrating that nobody in occupied Crimea is safe from persecution and that the FSB can torture and fabricate ‘evidence’ with impunity.

During almost 30 ‘hearings’ thus far, the occupation court heard detailed accounts of the torture used to extract ‘confessions’ or ‘testimony’ against Dzhelyal from Asan and Aziz Akhtemov and from at least two other men who were also held incommunicado by the FSB.  Both Asan and Aziz had retracted their ‘confessions’ as soon as, after intervention from the European Court of Human Rights, they were finally allowed to see proper lawyers.  Both men revealed details then about the electric shocks and beatings used to extract ‘confessions’, but only briefly indicated that the men’s families had also been threatened.  During the men’s questioning in court, more information was given about the threats of reprisals against the men’s wives and children, and also the cruel use of mock executions.

The two cousins were held and tortured in neighbouring rooms, so that each could hear what the other was going through.  Both cousins were subjected to a cruel faked killing, where a shot was fired in the next room, followed by silence.  Aziz recounted that he had heard Asan saying “I won’t do it!” just before the shot, and ensuing silence.   Both men explained that they were forced to learn supposed ‘confessions’ off by heart.

It is clear, both from the men’s testimony and from the video posted by the FSB of the supposed ‘confession’, that the FSB-appointed ‘lawyers’ Violetta Sineglazova and Oleg Glushko were well-aware of the methods being applied against the men and said nothing.

During his appearance on 20-21 July, Dzhelyal listed the appalling violations of his rights, including the fact that he was prevented from seeing a lawyer. When he demanded to see a lawyer, he was told by FSB ‘investigator’ Vitaly Vlasov “you’re not in a position to ask for a lawyer”.  In fact, Vlasov also used a lie to cover his tracks, falsely informing Dzhelyal that he had ‘witness’ status, meaning he was not legal obliged to provide him with a lawyer.  It is quite clear from the case material that he had already been designated as ‘suspect’, and Asan Akhtemov was positively told that he had been seized because of his friendly relations with Dzhelyal.   Informally, Dzhelyal’s captors made it quite clear to him that the reason for his arrest was his participation in the Crimea Platform.

It is important to remember that the FSB carried out raids and effectively abducted five Crimean Tatars on 3 and 4 September 2021:  Dzhelyal was the last to be taken away in the morning of 4 September, just hours after the FSB burst into the homes of both Akhtemovs and Shevket Useinov in the night.  The Akthemovs are supposed to have provided testimony incriminating Dzhelyal, but could not  possibly have done so, before Dzhelyal was arrested.  Both Useinov and Eldar Odamanov, who was held for the longest incommunicado, were accused of entirely unrelated administrative charges and jailed for 10 or 15 days, but later appeared as ‘prosecution witnesses’.  In fact, the FSB miscalculated here as well, with both men making it clear in court that they had signed their alleged ‘testimony’ under duress.

Dzhelyl and the Akhtemovs are now facing 20-year sentences despite legitimate grounds for doubting that the alleged sabotage actually took place and no reason for linking any of the three men to it.  Since the Akhtemovs, and others, have retracted ‘testimony’ given under torture, the entire ‘trial’ hinges on the contradictory ‘testimony’ of three anonymous witnesses who may well have never met any of the men, and whose ‘testimony’ cannot be verified.

There are doubts as to whether the minor damage caused to a gas pipe in Perevalne on 23 August 2021 was an act of sabotage.  The report on that day suggested that “the mechanical damage to the gas pipe had, possibly, arisen as the result of illegal actions by unidentified individuals”, but the criminal investigation launched was under Article 167 § 2 of Russia’s criminal code (‘deliberate destruction or damage to property’.  There was no further mention of this damage, and to this day no photos, etc. have been made public.   The gas pipe in question was not on any central circuit and could be fixed relatively easily with this yet further reason for doubting the FSB claims that the alleged ‘sabotage’ was planned by Ukraine’s Military Intelligence together with the Mejlis.  Artem Hirieiev also points out that disruptions to gas supplies in August are hardly likely to cause major difficulties, unlike in Autumn or Winter.  He notes also the use of an explosive was unnecessarily complicated, with a gas pipe of that diameter easily damaged by mechanical means.

It is no small thing to buck the FSB in occupied Crimea, yet the Akhtemovs found the courage to retract their testimony and speak of the torture applied. The FSB responded immediately by increasing the charges against both men.  As well as the two men (Eldar Odamanov and Shevket Useinov) abducted during those first fateful days, two other Crimean Tatars have also spoken publicly about such abductions and torture, aimed at getting them to provide false testimony.

The only ‘evidence’ that has not been retracted comes from three anonymous witnesses. No grounds are ever provided for the use of such secret witnesses whose testimony cannot be checked, yet Russian-controlled courts invariably allow the anonymity and positively obstruct the defence even when they are merely pointing to the flaws in such anonymous ‘testimony’.

He claimed to be a Crimean working as a private driver between Crimea and Kherson.  He asserted that Dzhelyal had approached him in June asking him to take a package to the McDonalds in Kherson, and then later to collect something from a person called ‘Riza’.  There is a whole story around the supposed ‘testimony’, but it seems scarcely worth repeating when this alleged driver proved unable to say where in Kherson the McDonalds is.

Dzhelyal’s lawyer, Nikolai Polozov reported that on 20 April, this ‘secret witness’, had been able to reel off all of the testimony set out in the original interrogation protocol, but demonstrated stunning ‘lapses of memory’ when asked any other questions despite claiming to have known Dzhelyal since 2010.  There were also long pauses during which ‘Danilov’, who was speaking from another room, was clearly consulting with somebody, probably from the Russian FSB.

‘Danilov’ was actively abetted by presiding judge Viktor Zinkov.  During the hearing on 25 April, for example, Zinkov disallowed twenty questions from the defence, aimed not at exposing Danilov’s identity, but at demonstrating his lack of knowledge about the events he purportedly witnessed.  Both the defendants and their lawyers have on many occasions applied for Zinkov’s removal from the case for such behaviour.

An especially incriminating example was over ‘Danilov’s’ claim that he was present when Dzhelyal spoke by telephone in the Crimean Tatar language with ‘Riza’ and allegedly mentioned some business and a person called Asan, and his cousin.   He then ‘remembered’ with extraordinary detail that on 26 or 27 August he had been present when Dzhelyal supposedly phoned ‘Riza’ and spoke of it having “worked well with the pipe”.  It was then asserted that, after Dzhelyal’s arrest, ‘Danilov’ had put 2 and 2 together and got in touch with the FSB.

Asked by the defence. ‘Danilov’ claimed to know Crimean Tatar well enough to be able to translate Dzhelyal’s words for himself and for the FSB.  At this point, the defence asked him what the word for ‘pipe’ is in Crimean Tatar.  There was only one possible reason why Zinkov disallowed this question, namely, that ‘Danilov’s’ failure to answer would have made it clear that the entire story was untrue (more details here).

This individual claimed to be a Crimean Tatar and to have known Nariman Dzhelyal for ten years and to have taken part in various events with him.  He asserted that at some point, Dzhelyal had asked him to blow up some infrastructure, but that he had refused. ‘Bishovets’ used such evidently pro-Russian propaganda in his explanation as to why he had rejected this alleged suggestion, that it was obvious that he could not possibly have had the relations with Nariman that he claimed.  Zinkov, however, dismissed all of the defence’s questions aimed at demonstrating the fundamental lie in his testimony.

Dzhelyal had been threatened with reprisals if he left for Kyiv and the Crimea Platform and this certainly seems like an attack specifically on him.  It is, however, also important that he is the highest-ranking leader of the Mejlis, or self-governing body, of the Crimean Tatar people following previous repression and political trials.  Russia began its offensive against the Mejlis soon after its invasion and annexation of Crimea, due to the Mejlis’ implacable opposition to Russian occupation and the clear identification of the Crimean Tatar people with Ukraine.  Russia has been in violation since 2017 of a direct order from the UN’s International Court of Justice to remove its extraordinary ban on the Mejlis as ‘extremist’.  During the hearing on 21 July, Dzhelyal said that, in an informal conversation, an FSB official had suggested that the Mejlis might now be declared ‘a terrorist organization’, and cited words to this effect by the Russian-installed ‘Crimean leader’ Sergei Aksyonov.

Nariman Dzhelyal, Asan Akthemov and Aziz Akhtemov have been imprisoned since 4 September 2021, and the same 'court'  on 21 July extended their detention for a further three months.  All of the men have small children.