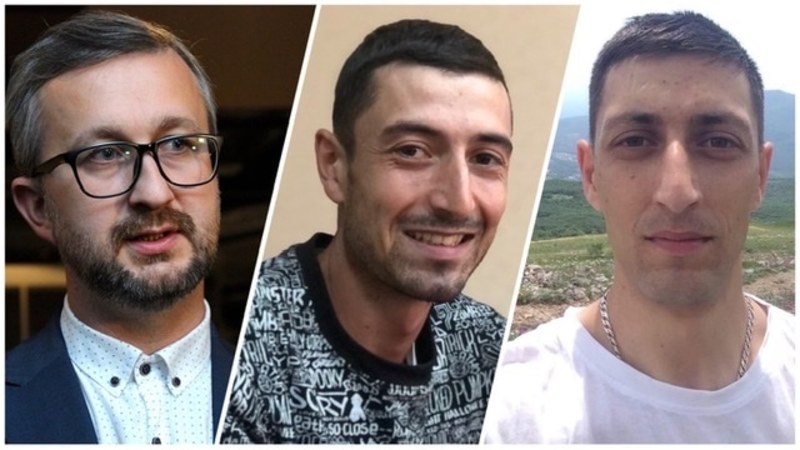 Both of the Crimean Tatars abducted together with political prisoners Nariman Dzhelyal and two cousins - Asan and Aziz Akhtemov, have stated during the trial of the latter that their ‘testimony’ against the defendants was given under torture or psychological pressure.  The description of torture methods used corresponds closely to those given by the Akhtemov cousins after intervention by the European Court of Human Rights forced Russia to stop holding the men incommunicado and allow them to see independent, lawyers.

As reported earlier, there is no empirical evidence to back the ‘sabotage’ charges against Dzhelyal and the Akhtemovs, nor does it even seem certain that the purported damage to a minor gas pipe in the village of Perevalne in occupied Crimea occurred as the result of sabotage. The ‘case’ hinges on ‘confessions’ which the Akhtemovs immediately retracted, once given access to lawyers, and on the ‘testimony’ of prosecution witnesses, most of whom are secret.  It transpired on 24 and 25 May, however, that the last two prosecution ‘witnesses’ were the two Crimean Tatars who disappeared during the same weekend as Dzhelyal and the Akhtemovs.

Shevket Useinov was, together with the Akhtemovs, subjected to an armed raid and search during the night from 3-4 September 2021, and was then taken away in an unknown direction. It was only late on 4 September that the FSB finally confirmed that the three men were in their custody, together with Nariman Dzhelyal, First Deputy Head of the Mejlis, or self-governing body, of the Crimean Tatar people, human rights activist and journalist, and Eldar Odamanov.  The latter had been seized early on 3 September and was thus held for almost 48 hours before the FSB even admitted that it was holding him. It was, frankly, suspected that the two men had been, in some way, coerced into providing such ‘testimony’ after both Useinov and Odamanov were held without access to lawyers until 5 September 2021 and then sentenced to 14 and 15-day terms of imprisonment on nonsensical charges of refusing to obey a police officer.

On 24 May, Shevket Usein appeared at the hearing in the Russian-occupation ‘High Court’ in Simferopol.  Questioning from the defence highlighted huge discrepancies between the earlier ‘testimony’ which Useinov provided and that in ‘court’. Useinov also stated clearly that he had been under enormous psychological pressure, and that he had given the earlier ‘testimony’ to the FSB with a bag over his head and in handcuffs.

Crimean Process has now reported that Eldar Odamanov appeared on 25 May, and gave an even more shocking account of the FSB’s methods.  The report incorrectly states that Odamanov was seized during the night from 3-4 September but does not appear to be mixing up the actual testimony.  In ‘court’, Odamanov stated that, after being detained, he had been placed in some kind of building where he was tied, with the use of scotch tape, to the table, with his torturers then passing electric currents through parts of his body. This causes excruciating pain, and Odamanov agreed to sign whatever papers were put in front of him.

Crimean Process notes that the prosecution had repeatedly tried to get Odamanov’s ‘testimony’ read out in ‘court’ without him having to be present.  It became entirely clear on 25 May just what the Russian-controlled prosecutor was trying to conceal.

The methods used by the FSB in occupied Crimea are known to be so bad that people will agree to sign just about anything in order for it to stop. The effects of the psychological offensive against people deprived of any contact with independent lawyers or their families should also not be forgotten. Nor should the courage that both Useinov and Odamanov required to appear in an occupation court and state unequivocally that their earlier ‘statements’ had been tortured out of them.

He was seized by the FSB less than two weeks after the Crimea Platform’s inauguration.   Dzhelyal was the last of five Crimean Tatars to disappear after being taken away by the FSB on 3 or 4 September, with nothing even known of their whereabouts until late on 4 September.

Nariman Dzhelyal; Asan and Aziz Akhtemov have been imprisoned since 4 September, 2021.  The charges against all of them have become increasingly more severe, carrying sentences of up to 20 years.  At least the first escalation in the charges against Asan Akhtemov came immediately after he gave a detailed account of the torture used. The men are charged with carrying out an act of sabotage as part of an organized group (Article 281 § 2a); purchase, transfer or possession of explosives as part of an organized group (Article 222.1 § 4; smuggling an explosive device, as part of an organized group (Article 226.1 § 1.  In the final indictment, Polozov reported earlier, they added ‘causing considerable material damage to the Crimean gas network (to the tune of around 1,425 USD).  They are claiming that (the alleged, and questionable) cut in gas to the military unit that supposedly ensued constituted “an attack on the Russian Federation’s defence capabilities”.

There are legitimate doubts as to whether there even was an act of sabotage on 23 August 2021, and there are literally no grounds for suspecting any of the three defendants.  Even without the statements in court from Useinov and Odamanov, it has long been clear how the FSB has been obtaining its ‘evidence’.

In December 2021, two Crimean Tatars found the courage to go public about the torture they had been subjected to while held incommunicado by FSB officers. officers.  Nariman Ametov spoke out four days after he was taken from his home, in handcuffs and with a bag over his head.  He was savagely tortured, including with electric currents passed through his body. One of his torturers, who identified himself as ‘Maksym’, told him that “here you have no rights” and said that he had come to Crimea “to crush the likes of” Ametov. This individual assured Ametov that he would force him to say whatever he demanded and that he could do what he wanted without suffering any consequences.  Two weeks later, Kurtumer Chalgozov also went public.

It is, unfortunately, also evident that the three ‘judges’ at the occupation High Court in Crimea - Viktor Ivanovich Zinkov (presiding); Aleksei Viktorovich Kozyrev and Sergei Nikolaevich Pogregniak are aware that the case is fabricated.  Not only are they unwarrantedly allowing ‘secret witnesses’, but they constantly disallow questions proving that the ‘witnesses’, who may well not know any of the three defendants, are lying (details here).