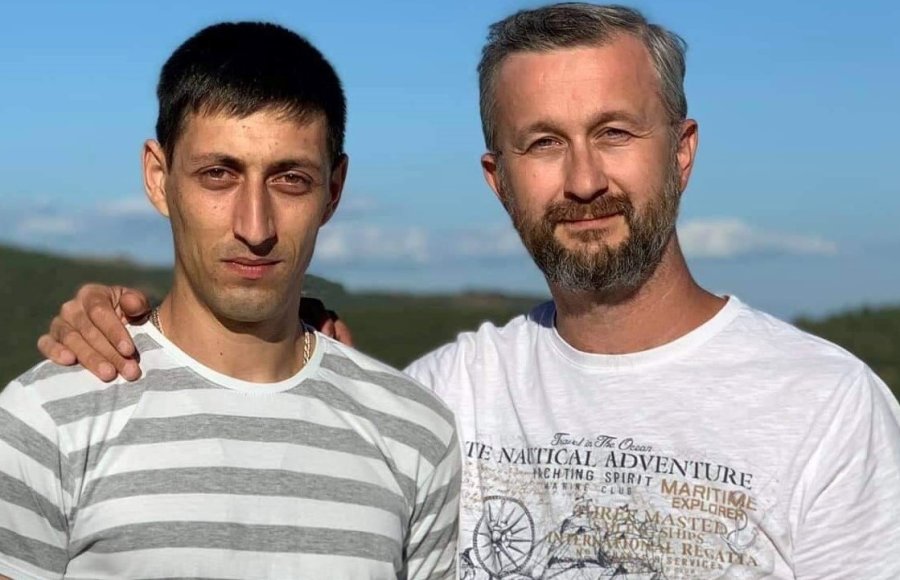 Crimean Tatar civic journalist and political prisoner Asan Akhtemov has told a ‘court’ in Russian-occupied Crimea that the FSB forced him to rehearse his so-called ‘testimony’ with some of it videoed several times.  Akhtemov also described the torture that the FSB used to extract ‘testimony’ – against himself, his cousin, Aziz Akhtemov, and Nariman Dzhelyal, journalist, human rights defender and leader of the Mejlis, or self-governing body, of the Crimean Tatar people.

During questioning at the occupation ‘Crimean high court’ on 13 July, Asan Akhtemov stated that, following his abduction, during the night from 3-4 September, he was taken to a basement where his captors attached electric wires to his earlobes, and sent electric currents through his body.  During the breaks between sessions of this excruciating torture, the FSB threatened reprisals against his family. Once he agreed to do whatever the FSB demanded to end the torture, the FSB officers began carrying out various ‘investigative activities’ in which he implicated himself and the other men.

According to Crimean Process, whose correspondent was present at the hearing, Asan explained that in the majority of cases, the FSB videoed the same ‘investigative activity’ several times.  The officers, he said, frequently improvised and changed their initial plans.  When the sniffer dog, for example, showed no interest in ‘searching’ the boot of Asan’s car, they decided to abandon the original claim that this was where he had carried ‘the explosives’.  Instead, they decided that during the video, he would point to the passenger seat since it was easier to get the dog to that point.  They were also forced, when their story fell apart, to come up with a different version  – and video – regarding where Asan was supposed to have unpacked an explosive device from a cheese package.

Over the first several days after that initial torture, Asan explained in court, he was interrogated at least three times. He was forced to learn the text of his ‘answers’ off by heart, and when he forgot his lines and confused them, he would get taken into the corridor and beaten.  On one of these occasions, the beating was witnessed by the so-called ‘lawyer’ engaged by the FSB.  The individual did nothing ,even after Asan positively told him that he had been beaten.  At the end of the videoed questioning, he was also forced to assert that this ‘testimony’ had been provided voluntarily and that he had not been placed under any pressure.

The only thing true in the entire indictment, Asan said, is that he and his cousin, Aziz, did indeed travel to Kherson together.  Everything else had been thought up by the FSB officers and then presented as ‘evidence’ by methods such as those seen above.

There are compelling grounds for believing that Asan Akhtemov is telling the truth and that he and his brother were indeed subjected to savage torture.  There would have been no reason to hold the men totally incommunicado for nine days had the Russian FSB had nothing to hide.  The only ‘confessions’ that the men gave were when they were totally under the control of the FSB, with only nominal ‘lawyers’, notorious for serving the FSB, rather than their supposed clients.  It was only after the European Court of Human Rights intervened that the men were finally able to see proper lawyers, and immediately retract the ‘confessions’ that had, both stated, been extracted by torture.  It was after they made these statements, that the charges against them were significantly increased.

After being held incommunicado for three days, the other two men, Odamanov and Useinov, were jailed for 10 and 15 days on absurd charges, quite unrelated to the armed raids on their homes.

There seemed grounds for fearing that the two men had been tortured into providing false testimony against the others, possible as so-called ‘anonymous witnesses’.  That did, indeed, prove to be the case, however, here too the FSB proved to have miscalculated.   In late May, both Shevket Useinov and Eldar Odamanov appeared in ‘court’ as prosecution witnesses, but stated clearly that they hac given their statements under duress and / or torture.  Crimean Process reported at the time that the prosecution had repeatedly tried to get Odamanov’s ‘testimony’ read out in ‘court’ without him having to be present.  It became entirely clear on 25 May just what the Russian-controlled prosecutor was trying to conceal.

In December 2021, two Crimean Tatars found the courage to go public about the torture they had been subjected to while held incommunicado by FSB officers. officers.  Nariman Ametov spoke out four days after he was taken from his home, in handcuffs and with a bag over his head.  He was savagely tortured, including with electric currents passed through his body. Two weeks later, Kurtumer Chalgozov also went public.

‘Sabotage charges’ and 20-year sentence in revenge for Crimea Platform

He was seized by the FSB less than two weeks after the Crimea Platform’s inauguration.

Nariman Dzhelyal; Asan and Aziz Akhtemov have been imprisoned since 4 September, 2021.  The charges against all of them have become increasingly more severe, carrying sentences of up to 20 years.  The men are charged with carrying out an act of sabotage as part of an organized group (Article 281 § 2a); purchase, transfer or possession of explosives as part of an organized group (Article 222.1 § 4; smuggling an explosive device, as part of an organized group (Article 226.1 § 1.  In the final indictment, Polozov reported earlier, they added ‘causing considerable material damage to the Crimean gas network (to the tune of around 1,425 USD).  They are claiming that (the alleged, and questionable) cut in gas to the military unit that supposedly ensued constituted “an attack on the Russian Federation’s defence capabilities”.

There are legitimate doubts as to whether there even was an act of sabotage on 23 August 2021, and there are literally no grounds for suspecting any of the three defendants.  Even without the statements in court from Useinov and Odamanov, it has long been clear how the FSB has been obtaining its ‘evidence’.

It is, unfortunately, also evident that the three ‘judges’ at the occupation High Court in Crimea - Viktor Ivanovich Zinkov (presiding); Aleksei Viktorovich Kozyrev and Sergei Nikolaevich Pogregniak are aware that the case is fabricated.  Not only are they unwarrantedly allowing ‘secret witnesses’, but they constantly disallow questions proving that the ‘witnesses’, who may well not know any of the three defendants, are lying (details here).