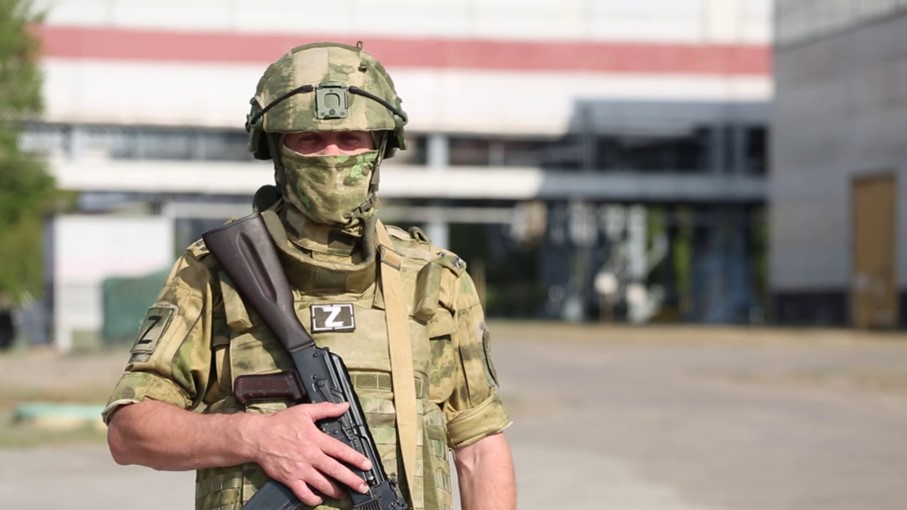 Russia’s Rosgvardia fighters have reported ‘detaining’ two more employees of the Zaporizhzhia nuclear plant and another person, with their report effectively acknowledging, against Russia’s own denials, that the invading state is using the nuclear plant as a military base. The Eastern Human Rights Group has also received information that the Russians are using underground bunkers at the plant for holding and torturing the ever-increasing number of Ukrainians they abduct.

Rosgvardia claimed on 25 August that the nuclear power plant had “come under their protection” on 4 March.  This is Russianspeak for the armed seizure of the plant by the invaders that caused a fire on the territory of the largest nuclear power plant in Europe.  The Russians have since abducted many employees of the plant, but do not normally admit to such abductions and to their motivation.  In this latest report, Rosgvardia says that it detained “employees of the Zaporizhzhia NPP abetting the Ukrainian Armed Forces”.   It asserts that two employees “provided information about the whereabouts of the personal contingent and technology on the territory of the ZNPP.  The detention also took place of a violator of the pass system who had supplied the Ukrainian Armed Forces with information about the movement of a column of Russian technology.”

This admission comes as Moscow continues to deny that it is storing military equipment and ammunition at the power plant and, essentially, using it as a military base from which it launches attacks on Ukrainian cities.

Since the first reports of shelling of the nuclear power plant, there has been mounting concern in Ukraine and abroad about a potential nuclear disaster at the site, either from the shelling, or because of Russian attempts to disconnect the nuclear power station from the Ukrainian grid and redirect the energy to occupied Crimea.  On 25 August, the plant was temporarily disconnected from the national grid, seeming because of fires, caused by Russian shelling of a coal station nearby.

Ukraine’s nuclear agency Enerhoatom reported on 27 August that the Russians were continuing to shell the territory of the plant and that the danger of fire, hydrogen leakage or sputtering of radioactive substances was high.

While Russia claims that it is Ukraine that is shelling its own nuclear power station, there is immense concern in Ukraine that Russian occupation of surrounding areas would prevent or complicate evacuation of the population in the event of a major disaster.  On 26 August, Anatoliy Kurtiev, Secretary of the Zaporizhzhia City Council, reported that residents of one district of the city had already been issued with iodine tablets.  This, he said, was in accordance with a Ministry of Health recommendation that people within 50 kilometres of the likely source of radiation should take such preventive measures.

The Russians have killed at least two employees of the Zaporizhzhia power plant.  Andriy Honcharuk, a diver, was beaten and tortured on 29 June after he refused to take part in the invaders’ attempt to empty the water from the cooling system and to stop the pumps needed for ensuring the safety of the reactors.  He died of the injuries incurred on 3 July. Enerhoatom reports also that, on 22 August, the Russians shot at a taxi in Enerhodar and gravely injured a mechanic from the plant who later died in hospital.

It is not clear how many of the employees abducted by the invaders have since been released, but it has been reported that those who are freed are silent about what they endured.  Although the abductions began long before the recent moves aimed at getting a team of inspectors from the International Atomic Energy Agency [IAEA], media reports, citing employees, suggest that the latter are being pressured and even tortured, to prevent them from speaking openly to IAEA inspectors about the dangers at the plant.  One unnamed employee explained that the Ukrainian personnel were being seized and flung into basements.  They return, after such ‘conversations’, the source said, unwilling to say anything at all, though may later, during the visit, suddenly begin saying what they have been forced to say.  Without clear guarantees of total anonymity and safety, it is hardly surprising that personnel would fear for their own lives, and those of their families.

On all Ukrainian territory temporarily under Russian occupation, the invaders abduct and torture Ukrainians.  The Eastern Human Rights Group reported on 25 August that they had learned of dozens of new abductions.  The NGO say that the Russians use underground bunkers at the Zaporizhzhia nuclear power plant to hold, interrogate and torture abducted residents of Enerhodar.  They target activists; volunteers; local businesspeople and, essentially, any residents who openly do not support the invaders.  The group’s sources from among the local population mention various forms of torture, including electric shocks; asphyxiation (with the use of plastic bags) and having chlorine poured under the victims’ feet in a closed cell.  Their sources speak of minibuses having taken the bodies of tortured victims away in bags,

On 26 August, the human rights defenders informed that they had received further information.  They suggest that the torture chambers set up in the underground bunkers of the plant are controlled by the notorious Wagner Unit mercenaries, and that the effective prison they have created is also used as a so-called ‘filtration camp’.

Typically, in most cases (except those of pro-Ukrainian activists and volunteers), the only way out of this dungeon is through paying a ransom.  One of their sources is a person, whom they call Pavel, who was earlier an employee of the nuclear power plant.  He managed to get out from the Russian captivity and to reach Ukrainian-controlled territory.  He says that entire families of people who openly support Ukraine are seized and that he was told by the Russians that the FSB allow them to use any form of torture, since they can expect to be tried at the Hague in any case, if Russia loses the war.

Pavel asserts also that the most savage of the Wagner mercenaries at the nuclear plant were the ‘kadyrovtsi’ (the Chechen fighters linked with Kremlin-installed Chechnya leader Ramzan Kadyrov) and Syrians. He claims that, having heard that there was a young woman with the Russian-sounding name Masha, these mercenaries had seized her and raped her for many hours.  The claim was that she had “betrayed” her allegedly Russian name by “linking up with Ukrainians”.  They threatened the young woman that they would “punish” her relatives in occupied Melitopol if she told anybody about their treatment of her.

This, and the additional form of torture, namely threats to throw people into the nuclear reactors, are unlikely to be seen by the UN nuclear watchdog’s inspectors, the human rights group believes.  Even if IAEA is allowed into the power plant, they will certainly not be given access to all of it.

There have already been such meaningless visits, for example, by the International Committee of the Red Cross to the Olenivka prison where Russia is holding a huge number of Ukrainian prisoners of war and civilian hostages.  It remains to be seen how any IAEA inspection is carried out, but there seem equally compelling reasons for doubting that Russia will allow such a visit unless it can conceal the danger to which it is exposing Ukraine, Europe and beyond through its criminal use of the plant as a military base and prison.