Russian invaders abduct Kherson oblast local leader, install “worst of the worst” collaboratorsMayor of Kherson abducted after refusing to collaborate with Russian invaders Russian invaders torture abducted Kherson patriot into ‘confessing’ to surreal ‘abduction plot’ Tortured to death by Russia"s FSB for helping to defend Ukraine from the invadersTeachers in occupied Kherson refuse to collaborate with Russian occupiers Russia uses terror and abduction in attempt to force schools to collaborate in occupied Melitopol Mayor of Melitopol Ivan Fedorov abducted after refusing to collaborate with the Russian invaders Russian priest arrested and prosecuted for sermon opposing Russia’s war against Ukraine Russia effectively admits it deliberately bombed the maternity hospital in Mariupol that killed three patients, including a childRussia brings grotesque propaganda to Berdiansk after Ukrainian journalists refuse to collaborate Russian invaders murder Ukrainian volunteers Impassioned appeal from Ukrainian Muslim leader in face of Russia’s war to destroy Ukraine Russia is forcing Ukrainians from occupied Crimea and Donbas to fight in its invasion of Ukraine Children among the dead after Russian invaders opened fire on fleeing civilians Russia installs its propaganda TV after seizing Kherson and imposes 15-year sentences for reporting its invasion of UkraineUkrainian survivors of the Holocaust demand Putin and Russia get out of Ukraine Russia continues its carnage, flouting binding order from ECHR to stop bombing civilians in UkraineBabyn Yar bombed by Russia, 80 years after Nazi Massacre of Ukrainian Jews Russia proposes 15-year sentences and threatens "treason charges" for telling the truth about its war crimes in UkraineRussian schoolchildren told that Russia is bombing and killing Ukrainian children in ‘self-defence’
• Topics / War crimes 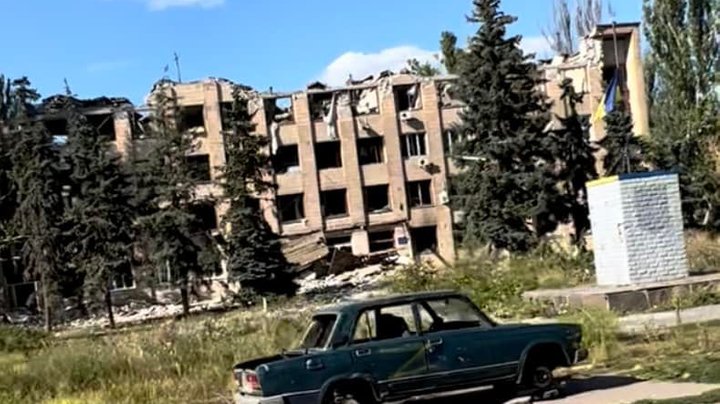 Ukrainian Armed Forces reinstated the Ukrainian flag over Vysokopillia in Kherson oblast on 4 September, after six months of Russian occupation.  The Russians are still shelling this previously affluent urban-type settlement and any full investigation into both the material damage caused by the invaders, and the war crimes committed, must probably wait until the Kherson oblast is fully liberated.  It is, however, already clear that the Russians abducted and tortured residents, with the fate of at least twenty still unknown.

Natalia Oliferovych told Ukrainski Pivden [‘Ukrainian South’] that it was impossible to describe how bad it was under occupation.  They had stayed inside as much as they could and were forced by the Russians, who had even taken away their passports (internal identification documents) to wear white armbands if they did move about.  She was so terrorized that when the Ukrainians arrived, she was initially suspicious, fearing that these were Russians, wearing Ukrainian uniforms.  Her sister was less hesitant and simply asked the lads to pronounce ‘palianytsia’, the word for a round type of bread that Russians find impossible to pronounce properly.

Several thousand Vysokopillia residents left after the Russians gained control in the middle of March, however many remained.  Some wanted to protect their homes from marauding invaders, others, like Natalia Oliferovych’s husband, refused to leave their fields untended, and at the mercy of the invaders. reports that virtually all administrative buildings are now destroyed, as well as buildings in the private sector.  Most residents had cars with many of these having been stolen by the invaders who daubed the Russian ‘war symbol’ ‘Z’ on them and, in many cases, turned them into wrecks.  The local residents tried not to leave their homes

In all parts of Kherson oblast (and other areas seized by the invaders) enforced disappearances began as soon as the Russians took control.  Vysokopillia was no exception with Hanna Shostak-Kuchmiak, Head of the Vysokopillia Hromada, telling the Economist back in August that she knew of 20 locals who had vanished after being taken away by the Russians.   She has since provided more details of life – and death – under Russian occupation in Vysokopillia and neighbouring villages to Artur Prikhno from the Media Initiative for Human Rights [MIHR].

The Russians first launched Grad missiles at Vysokopillia on 13 March.  The attack, on an evidently civilian target, destroyed a kindergarten, as well as over ten other buildings, as well as killing the first of many local residents.  The Russians seized control and Ms Shostak-Kuchmiak was forced to approach them for agreement on burying those killed at the cemetery. This proved impossible, and the dead were simply buried in a hospital park, near the morgue.

Unfortunately, a lot of the invading forces were, in fact, Ukrainian citizens from the Russian proxy ‘Donetsk people’s republic’ [‘DPR’].  While dressed in Russian uniform, it was easy to distinguish them, Ms Shostak-Kuchmiak says.  The Russians’ uniforms and shoes were better, as were their weapons and means of defence.  The Russians also had heavy weapons and technology, whereas those from ‘DPR’ had only what they had taken from local residents.  All this confirms numerous other reports that Russia has been using men forcibly ‘mobilized’  from the so-called ‘Donetsk and Luhansk republics’ essentially as cannon fodder.

As soon as the invaders seized control, they began stealing cars and other vehicles and painting the ‘Z’ symbol on them. Hanna Shostak-Kuchmiak says that they plundered virtually all local farmers.  She recalls a conversation with other Russian soldiers who actually praised Ukrainian villages, how Ukrainian homes are set up.  This was despite making it clear that they had come to kill Ukrainians, and “wanted the blood” of those Ukrainian defenders who took part in the military conflict [ATO, or the anti-terrorist operation] after 2014.   They demanded that she come with them and point out where ATO fighters lived.  She told them that she was quite new to her position and didn’t know who lives where.  They rubbished this, and claimed that they  knew anyway and had lists of the fighters.  She doesn’t know if this was true, but says it is possible as there would have been such a database in the social security department to which the invaders would have gained access.

She herself had seen another list, which she says was written in a woman’s handwriting.  That named all the businesspeople in the Hromada, who might be expected to have money.  She says that she knows that the Russians did go around homes, robbing people. They had, she adds, a “specific perception regarding what they were doing” and claimed that they were “liberating us from bourgeois and kulaks.”  This term is that which the Soviet regime used when purging those villagers who might simply have done well for themselves by hard work.  It is disturbingly appropriate for the mentality of the invaders who assumed that any successful businesspeople must have got rich dishonestly. “They couldn’t even comprehend that these were businesspeople who had earned their money through honest work”.

People began disappearing immediately, both in Vysokopillia and other villages in the Hromada.  Hanna Shostak-Kuchmiak says that she was told by locals that the Russians were killing people and hiding the bodies in the basement of a house occupied by one elderly man living alone.  This was near a Russian checkpoint, and not necessarily safe, but she took a packet of cigarettes and rode on her bike to the checkpoint.  She had seen one of the men at the checkpoint before and called him over.  She gave him the cigarettes to get permission to visit the elderly man and take him some medicine, as he was, she asserted, ill.

Inside the home of this man (Fedor), she asked: “Is it true that you have dead civilians lying in your basement?”   He began shaking with fear, and said that he was frightened and not prepared to speak.  She asked him for a single word – yes (it was true) or no.  He answered ‘yes; and then couldn’t stop and told her that a couple of people were buried in the garden, while the bodies of others had been taken to a disused factory and dumped there.

She tried to persuade the elderly man to at least move somewhere else, to relatives or out of the Hromada, since the Russians knew that he was a witness and might kill him.  Unfortunately, she says, he refused to leave and was later killed by the Russians.

In another village, they believe, locals whom the Russians abducted were held in a school. Local residents saw both men and women being taken there with bags over their heads, and often pulled out.

There was not a single populated area within the Vysokopillia Hromada where nobody disappeared during the occupation.  Over the entire Hromada, more than 20 people are recorded as having disappeared without trace.  This figure may well rise, and residents of Vysokopillia alone have told her of a mass grave near the local culture centre containing the bodies of 20 people.  This information, however, needs to be verified.

At least 600 people in the Kherson oblast have been abducted by the Russian invaders since 24 February 2022.  The bodies of some of the victims have been found, with many showing clear signs of torture.  In other cases,  Russia is illegally taking people to occupied Crimea in order to stage politically-motivated show trials.